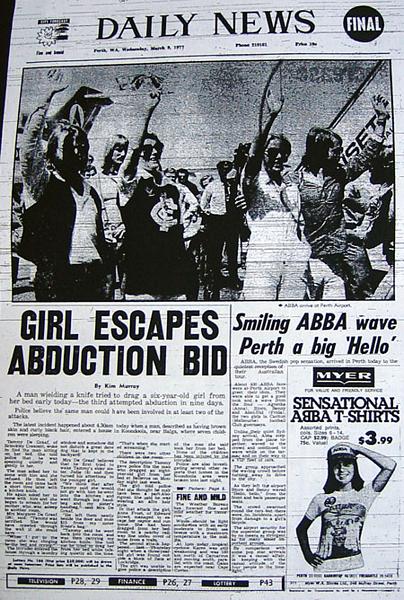 ABBA spent just five days in Perth in 1977. Nonethless, there are some lasting legacies from their time here, most notably “ABBA – The Movie” and the “Live At Last” bootleg CD. Searching through old newspapers in the State Library, I’ve been able to compile the following chronology…

Rather than going straight to the hotel where ABBA were staying, The Parmelia Hotel, Abba went straight to the Swan River for a sail on the yacht Sir Henry Merkin. “The girls brought their bikinis in their hand luggage”, said promoter Patti Mostyn at the Parmelia. “They have not had any time off since they arrived in Australia and they wanted a swim.” Some of the most famous photographs of ABBA during the 1977 Concert Tour are in fact those taken on the Swan River.

Meanwhile, about 30 or 40 fans were waiting for ABBA outside Perth’s Hilton, The Parmelia. A couple of quite young fans, Evan Burton and Jim Snee were interviewed by the “Daily News”. Jim had written poetry for Agnetha and Evan had a brought a synthetic rose. Jim received a kiss on the cheek, an indication that security was, once again, reasonably loose. According to “The Daily News”, the only security man in evidence was a lounge-suited gentleman who during the long wait had been dubbed “Mr Meany” by the fans. So when the cars pulled up and ABBA got out there was nothing to stop the crowd from mobbing fans. The fans didn’t know quite what to do. For an instant they hung back then charged forward accompanied by the cries of Mr Meaning who was bellowing: “I’ve warned you kids, you’ve blown it now, you’ve blow it for all time”. In keeping with their image, ABBA took it all ever-so-sweetly and even responded with the odd peck on the cheek.”

This was not the only occasion though that fans had close encounters with ABBA. At some point, though I’m not sure of the exact time, Local Aboriginal leader, Ken Colbung had also brought a group of children from the “New Era Fellowship”. to the Parmelia where ABBA were serenaded with a number of their songs played on the didgeridoo.

The first concert, at 6pm on Thursday night at the Perth Entertainment Centre was marred by a bomb hoax. According to “The West Australian”, “About 7.40pm, with about 20 minutes of the concert still to run, the group’s pianist Benny Andersson suddenly found himself alone on the stage with the three other members absent. They did not return for several minutes. “Just a minute,” he said and consulted a stage-hand. Then a voice came through the amplifier telling the 8000 people that there would be a 15-minute internal. They were asked to leave the hall in an orderly fashion.” The Daily News reported that “Abba pianist Benny Anderson said today he was particularly worried about last night’s bomb hoaxes because his son was at the Entertainment Centre. A member of the Entertainment Centre staff told “The West Australian”, “We have had bomb scares before, but have never taken any notice of them. It was Abba’s decision to empty the hall.” The start of a second performance due to begin at 9pm was delayed by 15 minutes.

A major photo opportunity occured on Friday at the Parmelia Hotel. In addition to ABBA being in Perth, other famous guests at the hotel included Alice Cooper, The Dubliners, Gerry and the Pacemakers, The Searchers, Stephane Grappeli and the Diz Disley trio who were photographed together for the “Weekend News”.

Although many of the concert sequences in ABBA – The Movie were filmed in Perth, the nature of the film’s editing makes it difficult to build a meaningful chronology. The “Live At Last” CD contains six tracks – Tiger, That’s Me/Waterloo, I Do, When I Kissed The Teacher, I Am An A and So Long – which were recorded during one of the Perth concerts.