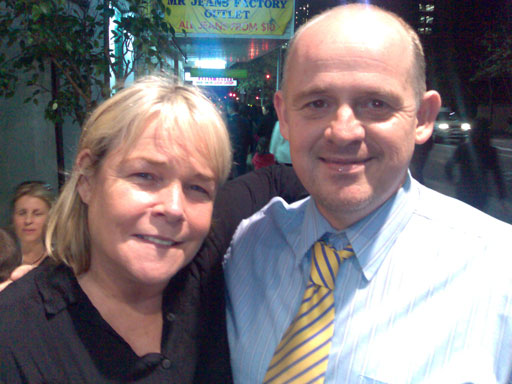 It’s Christmas Day and I’m watching the “Birds Of A Feather” marathon on UK-TV. I’ve gone up and down the remote control several times and this is about the best television viewing there is tonight. I’ve noticed this year the absence of “Christmas movies” on either free-to-air on pay television and have been wondering why. Or maybe “Sound Of Music” and “Jesus Christ Superstar” are what constitute “Christmas movies” these days.

It’s been a reasonably busy social week. I went along to ABBAMAIL drinks on Wednesday night which was, as usual, great fun. On the way there I had a terrific conversation with the cab driver, a young bloke who comes originally from India. Throughout the course of the conversation, I established that he was Muslim and that India had the largest Muslim population in the world (aside from Indonesia). As we spoke about issues of religion and its daily practice – the fact that I can no longer pop into my church on my way home because it’s now locked, whereas he pops into a mosque for daily prayers – we really clicked. At the end of the trip, as I handed over the cash, he wished me “Happy Christmas” to which I replied, “Same to you”. Although at first, I thought to myself, that’s a stupid thing to say to a Muslim, with a few days break, I think it was probably okay. I hope so anyway.

After last weekend attending a wedding here in Sydney, I’m off to another weekend at the end of January. I booked my flight to the Gold Coast this week for Briony & Steven’s wedding. I’ve only met Steven the once, but I’ve known Briony for about ten years now… is it that long? The wedding will be terrific I’m sure and I wish them both the best. But curiously enough, since it’s been YEARS since I’ve been to a wedding, they seem to be back on vogue with my friends now. Geoff last week, Briony at the end of January and also this week, news that a friend, Damien (no, not THAT Damien), is also getting married.

Work was reasonably busy earlier in the week, but quieter later in the week. The big difference with my new job compared with my previous job in Sydney is a little more flexibility in my working hours. Working on a drivetime program, I could never really go out for lunch, but now I can. And yesterday, Michaela and I went for lunch at the Burlington Centre in Chinatown. As was my want, we had the fried Pork & Chinese Cabbage Dumplings which were, as usual excellent. I’m not sure about the name of the place, although I’ve been there many many times, but I do know the food is excellent and the price is very good value.

Speaking of work… also this week, I’ve had some calls and emails from Perth. I was really pleased to receive a couple of “Merry Christmas” phone calls from Perth – from Mike and Di – yesterday. I also received an email from Sarah telling my the work Christmas Photos were now online. I really hope the friendships I’ve made there this year can continue, despite the distance.

Today was really terrific. I was invited to attend Christmas Afternoon at a friends place.

I came home at about seven o’clock, watched the Queen’s Christmas message – in which she spoke about racial and religious tolerance – and have had a night in front of the television.

What a perfect Christmas Day!