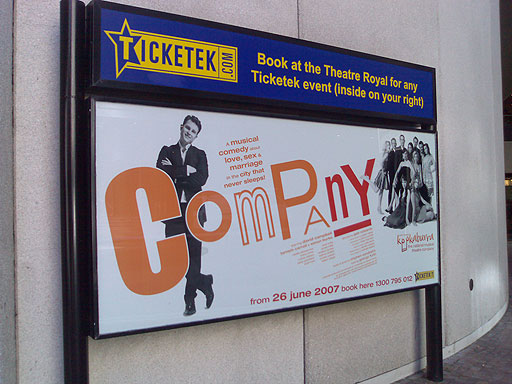 So Much To Say

You know how you have some weekends where you just literally sit on the couch watching “The Simpsons” for endless hours? Or how you get caught in one of those Foxtel marathons where you promise yourself you’ll only watch one more episode and then suddenly it’s Sunday night?

Well maybe you don’t, but it’s something I do from time to time, but this weekend WASN’T one of those weekends. In fact quite the opposite.

Despite a very early start at work on Friday, I still had a fairly lengthy day. Nonetheless, I made myself come home earlyish (4pm) for a brief lie down, ahead of catching up with Graeme for an after-works drink on Friday. We scouted around a few Surry Hills bars before settling on The Evening Star, which we’ve decided is “The New Taxi Club”, because it attracts such a broad range of people on a Friday night. Short people, tall people, straights, gays, trannies, people in wheel chairs, backpackers, Pacific Islands, etc. It makes such a welcome change from a lot of bars on a Friday night where everyone looks the same. “This is where that bloke shot that bloke?”, I said to Graeme. Without needing to ask for further clarification, he knew instantly what I was talking about, which is a sign of good friendship.

Waking up reasonably early on Saturday morning, I headed off for a day that involved some family history research at the State Library and a bit of shopping in the city. I picked up a new shirt and a fabulously and dramatically discounted 5-disc Barbra Streisand DVD of her early television specials. I’ve worn the shirt once, but have yet to watch the DVD. I’m quite looking forward to seeing the shows, though when I mentioned it to my friend Colin this afternoon, suggesting he might like to borrow it some time, he looked at me with “pure torture” on his face.

I didn’t have time to come home and watch the DVD instantly, since I needed to be at the Verona by about 3.15 to meet up with Damo, since we had planned to see “The Simpsons Movie”. It wasn’t a packed cinema (far from it), so it was possible to identify who was enjoying the movie and why. The parents in front of us seemed to really enjoy it, though their kids got bored. The older woman behind us also seemed to really enjoy it, especially the political jokes. It was a really enjoyable movie which I won’t spoil in any way shape or form, except to say stay for the end, as the jokes continue well into the credits.

With two hours to kill before dinner, we headed off for a cocktail at The Bentley Bar (mine was water melon based) and for a scout of the menu and a promise that we WOULD go there for dinner one night.

In hindsight, maybe we should have just stayed there for dinner, as we were a little disappointed with Foveaux Restaurant & Bar. It wasn’t so much the venue or the atmosphere or the food or the wine, it was probably a combination of all those things. Although we’re both happy to pay a lot of money for good food, we thought it was overpriced. At the price we paid you can get much better food, including at places like Becasse, Guillame, Moncur etc. Actually, I suspect they see Becasse as a bit of a role model, with their smart informality, degustation menus and hidden Surry Hills location in anticipation of “getting a hat” sometime soon. It was fine, don’t get me wrong, but it could have been better.

Today has also been a whirlwind of experience, starting off with a meeting of the art group I’m involved in, a repeat performance of “Company” and then the gay bloggers meeting at The Tilbury Hotel.

As I had been to see Company on the infamous and controversial night of the “two dropped numbers”, we had been compensated with tickets to see it again. As it turned out, the two dropped numbers were very important to the play as a whole, and succeeded in giving it new layers of meaning. New layers I hadn’t seen last time, revealing just how incredibly sad the show can also be. And throughout the show, “one couldn’t help but reflect on one’s own life”

And from there it was off to the bloggers meeting where I met and talked with a couple of people with blogs I read regularly, including the very lovely Monty and the very spunky Gus. The Other Andrew who is far more social than I, also initiated conversations with the very cute Single Guy and some other people whose blognames I don’t recall and pointed out Aussielicios whose blog is definitely not work safe.

And from there it was home just in time to see Zach become one of two final housemates on Big Brother. Ain’t life grand?