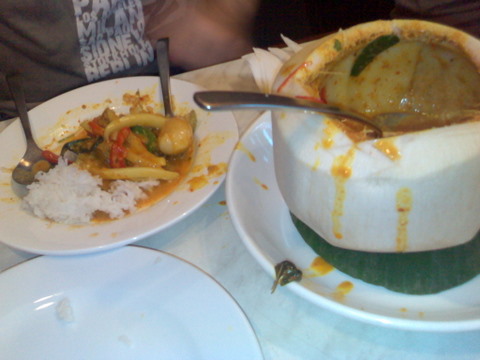 I had a very spicy meal for dinner last night. Very, very enjoyable, but also very, very spicy. Agreeing to meet at about 6.00pm at the restaurant, Spice I Am, I walked into the nearby Triple Ace Bar at about 5.45 and Damo was already there, ordering a glass of wine. After a brief catch up, mostly talking about his recent travel and my forthcoming travel, we wandered over to the restaurant and joined the queue for the already packed restaurant. After a rice paper roll entree (which was amazing: thick, but not tough), they actually got our main order wrong. We didn’t mind, though, as the the red duck curry served in a coconut which arrived in place of something else we’ve both since forgotten, was probably the best red duck curry either one of us had ever had. And let me assure you, I’m quite a fan of the red duck curry. I was also very impressed with the mango salad with soft-shelled crab, even though the chilli in the salad was hot enough to induce a brief case of hiccoughs, simple treated with about a litre of water. Damo brought with him a bottle of Meerea Park Semillion 07 from the Hunter Valley, which was the perfect accompaniment. We’re messy eaters, eh?

Wandering up through the lower end of Surry Hills, Damo mentioned he had never been to Long Grain. “Why don’t we call in and have a cocktail?”, I suggested. Although the bar was pretty crowded, we made friends with a couple of people with some spare seats, and so enjoyed two really tasty cocktails before heading up to another favourite haunt, The Bentley Bar, where we enjoyed a few glasses of wine. Most memorable for Damo was the Scorpo Aubaine Chardonnay from the Mornington Peninsula; the most memorable for me was a rose from Spain. All in all, a great night.

It should come as no surprise to you that I woke up late this morning. Not that I had much planned for the day, though, except a visit to my travel agent to finalise ticketing for by my big “mid life crisis” trip later this year. I find it almost impossible to express how excited I am at the moment, because I now have my flight details confirmed.

In the course of my research I came across a terrific website, far superior in my view to Lonely Planet and other guides, for anyone else contemplating overseas travel.