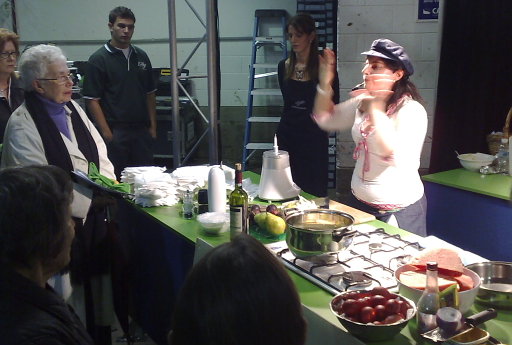 At 11.30 this morning, I went to a free Greek Easter Cooking Show at Paddy’s Markets. I didn’t catch the name of the instructor from Greekalicious, but I thought she did a very good demonstrating a couple of fairly simple recipes.

The first was a fairly simple spicy feta dip (with a great chilli bite), made in the food processor with feta, yoghurt, olive oil, chilli, garlic, oregano, basic, spring onions and cracked pepper.

The second was a watermelon and feta summer salad which was surprisingly good, given the different flavours.

The third was a dish made with prawns, feta, tomatoes and ouzo called a “Cyclades Style Prawn Saganaki”.

The final dish, which I couldn’t stay around for was a poached pears and fig dish.

Throughout the demonstration we got to taste food along the way, and all the time she emphasised some important principles of Greek cuisine. The main points were….

1. There is no such thing as a Greek Salad. It’s a Kalimata Salad, sometmes called a Village Salad.

2. Greeks make the best feta in the world, despite what the Danes may believe.

3. The only olive oil to use is Extra Virgin.

Overall it was a great way to spend the day.

And then Colin and I had lunch at the Lord Nelson. He had the beef pie, I had the pizza. Both were excellent.