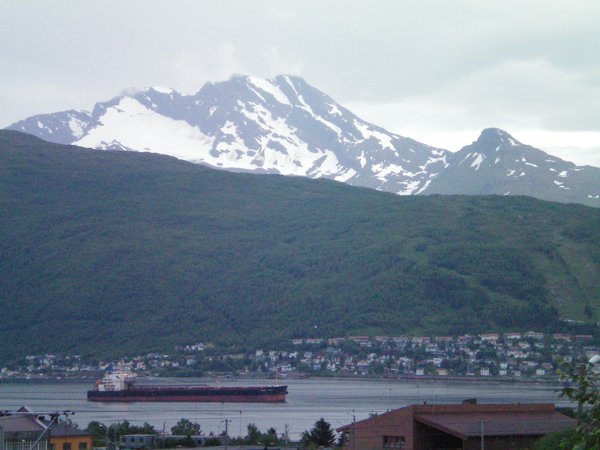 You’re aware, of course, of the two pub rule that applies in Australian country towns? The rule is that in each small Australian country town there are usually two pubs: there’s a popular pub that everyone goes to, and there’s the pub that no one goes to, but which is usually inhabited by itinerants and alcoholics. The same rule seems to apply in Narvik. And when I went out last night to discover if Narvik does indeed have a “nightlife” guess which one I went into first?

I went to Narvikguten because it looked kinda authentically local and non-touristy. And it certainly was. A small bar with about a dozen people sitting around, most of them completely wasted. Imagine if you would, an American western movie where a stranger walks into the bar and suddenly the whole room goes quiet. Well, that’s what it was like at Narvikguten, literally, when I walked in the door. Even the barmaid gave me a “we don’t like your type around here” look. Anyway, by the time I’d ordered my beer I knew it was already too late to leave. So I drank my beer and ate some pretzels. I also just knew from the vibe in the pub it was gonna get ugly later on, and there would later be a fight.

So after drinking my beer quite quickly, I headed off to the popular bar. Well, at first it wasn’t so popular. There was about twenty people or so sitting around having a drink quietly. The most wonderful thing about entering the bar, though, was the soundtrack: ABBA Gold. Just think: sixty years ago in Narvik, they shunned Frida as a “German Child”, and now they’re playing her on the juke box. For a while I sat around drinking my beer and checking out the assorted crew which remained few in number until about eleven-thirty. And that’s when everyone arrived. Hundreds of young people who had previously remained invisible in Narvik suddenly descended on Kaffeteria. It wasn’t all that different from an Australian country town, though. There was the big friendly guy walking around chatting to everyone and dancing. There was the hen’s night with the women in matching t-shirts which said “Tove Drikkett Up”. There were lots of bleach blonde girls in mini-outfits drinking goodness-knows-what. Honestly, I suddenly found myself back at “The Vines” in Berri in 1990 or “Choices” in Wagga in 1993. It could have been any small country town anywhere in the western world. And then there was the local guy who now lives in Oslo or somewhere, who had returned home with some mates. He was obviously well-known and was greeted by lots of people in that “welcome back home” kinda way. Along with him was a woman who shall forever be known as “Muriel” in my mind (for obvious reasons) who was also a former local, but who no one seemed to remember. And then there was the mate from Oslo, who occasionally looked over at me and smiled with the “Where the fuck am I, and what am I doing here?” look on his face.

It was then I discovered the problem with the midnight sun: you never know what time it is. When I left the guest house at about ten o’clock, I passed a group of people having a dinner party in their front yard in broad daylight. How did they know how late it was unless they checked their watches? As I walked home at about one o’clock in the morning it was also, still, broad daylight. Walking home in the daylight back in Sydney after a night on the town would equate to a “walk of shame”. Here, it’s just something you do. There are people down the street, for example, doing home renovations at the moment, and they’re at it until ten o’clock each night.

And then I thought about the kids playing in the outdoors. When I was a kid, the moment it started to get dark you knew it was time to go home. But in Narvik, how do the kids know it’s time for dinner or time for bed? The locals who live through six months of daylight and six months of dark (or close to it), must have their own inbuilt way of knowing the time.

For me it’s been a day of doing nothing at all. After about ten days of active sight-seeing, I decided it was time for a little rest and recreation. I’ve slept for a while, wrote some letters home to family and watched some television. Television on Sundays, by the way is totally weird. One tv station just shows a slide of news with BBC Radio as the audio. Another channel has a thing called “Sport Jukebox” which features various sports teams lip-synching to well known hits. The most strenuous thing I did was walk into town to call home, and to call Telstra. They’ve enabled international roaming okay, so I can receive calls and text messages, I just can’t make any. Thanks guys! But of course when I called, before I could even finish the sentence, I was transferred to another call centre which, of course, was closed. They might tell you their names and where they’re from now, but they haven’t gotten any better, have they? Oh yeah, and I did some washing, and cleaned out some of the assorted useless paperwork I’ve collected. I’m keeping those GST receits though!

The weather continues to be spectacular. Shorts, t-shirt and thongs was all I needed for the walk into town. It’s not really “summer” in the way we know it in Australia, it’s more like late-winter or early spring. Occasionally, the sun heats up and you feel your face burn, but mostly it’s very gentle.I think we might have a chilly night coming up. There’s heaps more snow on the mountain near town, and people are starting to rug up. I think it’s time to head back south.