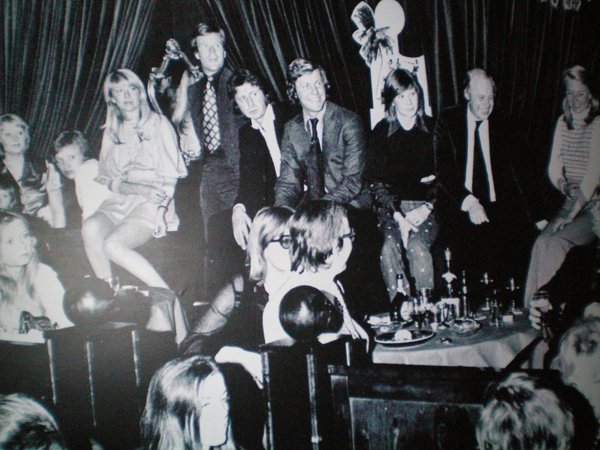 Glory days of the Blue Moon

I’ve just arrived home from a pub crawl in Stockholm and, to be honest, I’m quite sober. If I had been a bit pissed, that might have helped explain why I’ve ended up in Alvsjo. In Sydney terms, I guess you might say Alvsjo is like Homebush. There’s not a lot here, aside from where the Stockholm International Fair was held and some associated hotel accommodation. By train it’s about 15 minutes from the centre of Stockholm. I’m staying in a budget motel in a very small room which I booked and paid for several months ago. As a room, it’s not so bad, though it is small, and the email confirmation did say “no facilities”. And yet I have a television, wireless internet, a clean modern room, and the bathroom isn’t too far away. Unfortunately, it cost me about $40 to get home in the cab tonight, which is something I didn’t really figure into the equation. But it was a nice enough trip and the cab driver was fine. You live and learn, I guess.

It’s been a reasonably good day also. After waking, showering and doing all of the usual holiday things, I actually did something work-related today. I caught up for lunch with a friend of a colleague in Sydney who also works in radio. We talked about radio around the world, the similarities, the differences and all of those nerdy kind of things. Still, what would you expect of two similarly aged blokes who have been interested in and working in radio since their teenage years?

Later, I checked into my accommodation in Alvsjo and then had a shower and a rest before heading back into town. Catching the train was an assortment of people including a fair number of people wearing the Europride bands around their wrists. It’s a funny sight to see so many people wearing them, and people responding so well. A mate of mine commented tonight that in London you’d be bashed for wearing one, whereas here they say, “Welcome to Stockholm”.

I went into town tonight with no firm intention in mind, except that I thought I should be home by midnight. A friend of a mate from Canberra arrives in Stockholm today and we’re gonna catch up mid-morning. So I had this idea I should be sensible, pop into town only briefly, and then come back home for a good night’s sleep.

As it was, I headed towards my favourite bar since arriving, Torget, for a quick white wine, with the intention of seeing Lady Miss Keir (the former lead singer of Dee Lite which had the hit, “Groove Is In The Heart”) play Europride. I never quite made it, though, running into my mate Paul, and his friends from London and Glasgow.

“Feel like joining us for a bite to eat”?, I was asked, and then if I had any preferences. “Swedish food”, I replied, adding to my thesis that Sweden doesn’t really do “ethnic cuisine” all that well. One of the blokes then added a story about going into a Chinese restaurant in his native Germany and being served what SOUNDED like a really interesting meal, but which turned out to be chicken schnitzel with sweet and sour sauce. So we ended up having a bit to eat at a place in Galma Stan. While the others had meat balls, I went for the salmon which was excellent.

And so we then went looking for a bit of Stockholm nightlife. One of the blokes had the idea of seeing what a guide book had described as Sweden’s best “schlager band”. Anyway, we went to the bar, had a few beers and a dance, and, after finally deciding we wouldn’t have gone to this bar anywhere else in the world, went looking for somewhere else. You just know you’re in the wrong bar when there’s a queue of about 50 blokes waiting to get in and 4 women, and the blokes have to wait outside while the women are given quick entry. And then of course, you know you’re in a dodgy place when you walk outside and there’s a woman on horseback.

The bottom line is we wandered around and around from bar to bar in an endless search, didn’t drink all that much, and then, at about 1.30 gave up, deciding it was all just a bad joke. Not long before this, one of the blokes made his position clear, “I don’t care if I don’t see Alcazar and BWO. I want to go to Lino tomorrow night and I don’t want to queue”. The advice was heeded all ’round.

And then of course, we noticed the bloody train station was closed, thus forcing us into cabs.

Still, we saw a pretty funny poodle at Central Station.

AND we had a great night, and it was loads of fun just to hang out with a really nice bunch of people.