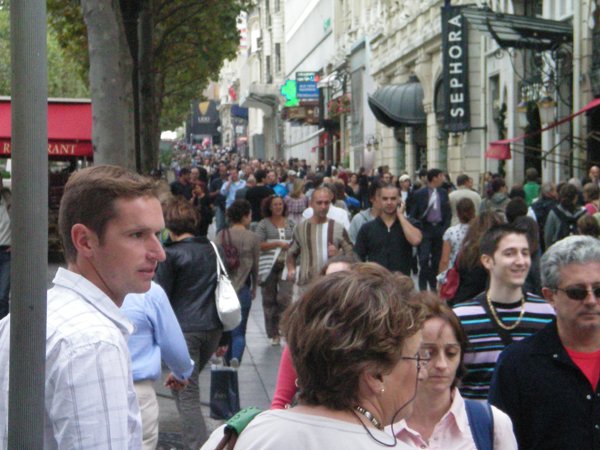 “Do you understand what she just said?”, the kind middle-aged woman asked me on the metro this afternoon. “Not a word”, I told her. She knew I didn’t speak French, because just moments earlier she’d asked me if I knew what was going on. She told me there’d been an accident on the metro and that we would all need to be patient.

By the time she told me what was going on half the passengers had already left the train. I’m guessing it was a suicide or something like that, since the train stopped suddenly just seconds after taking off. We all looked at each other with that knowing way.

I still wasn’t sure though what was going on. For a moment I wondered if there had been some sort of security alert, and that terrorists had maybe taken over the train. “Oh the drama of it all”, I thought to myself, and that’s maybe why I stayed on the train when so many others had left.

It’s been a day of independent sight-seeing for me. A day just to wander around, to get to know Paris and its people, with nothing specific in mind. That is, I wasn’t really interested in seeing sights. Rather I wanted to look at the people in the shops and cafes to see how they went about their daily lives, especially as summer is now officially over with today being the first day back at school. And so I bought a day pass for the transport system, hopped on the train with my map, and decided I would get to know Paris by foot and metro.

One of the things that really fascinates me about Paris is the large number of African people living here. Everywhere you go you see black faces, and while many of the people were obviously born and raised here, I also know there continues to be a steady stream of people from Africa moving to France.

I was also fascinated by the outward displays of affection between friends and family. And of course people in a relationship too. And by that I don’t mean inappropriate snogging etc, but just general touching and general closeness. It’s very nice. And of course, it was lovely to see quite a few gay boys walking down the street holding hands.

As if by homing-pigeon instinct, I stumbled on The Marais, Paris’ version of Oxford Street. Oddly enough, I found it far more cruisey than I expected, as quite a few men looked me up and down in that special kinda way. And did I mention French men are very good looking?

As with any major city, the people on trains tend to keep to themselves. But you don’t get that blank stare into space I found in London. Instead, people will acknowledge you when you smile at them, and the use of the word “pardon” is regularly used. This is also in stark contrast to Sweden where I knew two Swedish words for “sorry”, and used them regularly, though there were hardly ever used back.

About the only touristy thing I did today was head for a walk along the Champs Elysées which I found rather breath-taking. It’s a great walk, especially when you go through the main shopping area, approaching the Arc de Triomphe. As I walked along wearing my red t-shirt and fawn cargo pants, and saw everyone else quite well dressed, I was reminded of that section in the book, “Almost French” where the author was chastised by her husband for going to be bakery in track-pants.

The only thing that kinda disturbed me was that I am sure I was being trailed for a moment as a potential pick-pocket victim. Out of the corner of my eye I kept noticing a rather suspicious looking guy, and whenever I took a left or right turn, he was still there just metres behind. I’d been warned about pick-pocketing in Paris, and so maybe I was just being a little paranoid. But other times you just know that something is wrong, and I did on this occasion. And so when I saw some police near the Arc de Triomphe, I walked over towards them. The guy stopped following at that point.

And so now I’m back at the hostel going through my photographs and making some plans for the next few days. I’m meeting David at Fontainebleau tomorrow morning, and we’re heading off for a couple of days travelling around the Loire Valley. As much as I love the city, I’m still a country boy at heart, and I’m looking forward to getting a little dirt under my fingernails. Ewww…