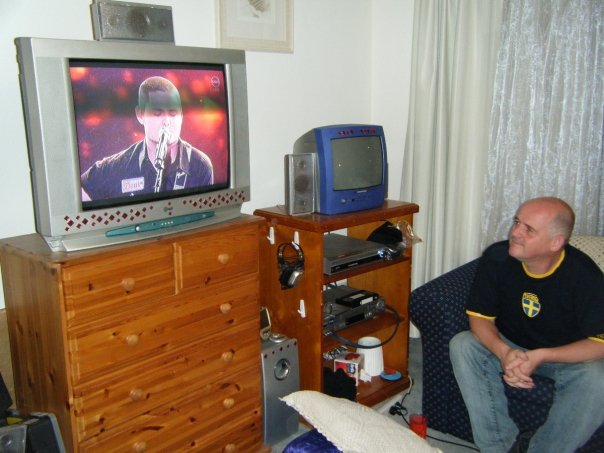 “So are you Swedish?”, the young guy with the Scottish accent asked me excitedly at the pub tonight. When I replied in the negative, he seemed a little disappointed, adding that “you don’t see many Swedes in Australia”. And then he walked away.

And then when ABBA came on the video screen, he came back over for a further chat. It was then he told me his mother was Swedish and “went to school with Frida”. “In Eskilstuna or Torshalla?”, I asked, which brought a big smile to his face. When I told him I’d had been learning Swedish, and had been to Eskilstuna, he instantly knew why.

It was at that point you could see a look of “judgement” in his eyes. Although we chatted for a few more minutes, you could just see from the look in his eyes, he thought I was a freak. “Party of one”, I’m sure he was thinking to himself. He did laugh, though, when I told him Swedish was “the international language of the homosexual”. And then he wandered off…

It was just as well I hadn’t told him I’d just been to a friend’s place who was hosting a dinner party of ABBA fans, coinciding with the Australian Idol ABBA Special.

Although some of the interpretations were quite good, others descended into third rate parody, in my view. “I’d rather a first rate Idol interpretation than a third rate ABBA impersonation”, I said at one point.

Still, it was nice to get out of the house. I haven’t had the most productive weekend ever. Just lots of televsion, the internet, music, reading, and eating.

Although I was feeling a little weary after dinner, I went for a walk along Oxford Street which was pumping. I ran into a friend and her husband as they walked home and chatted for a while.

And I ran into fellow blogger, Monty. “I’m sick of reading about your lovely boyfriend”, I joked to him, adding that I thought it was great and that I wished him all the best.

I also ran into another mate in Newtown, and we had a beer together.

So, despite sitting at home and doing not very much all weekend, it’s been a surprisingly social Sunday.