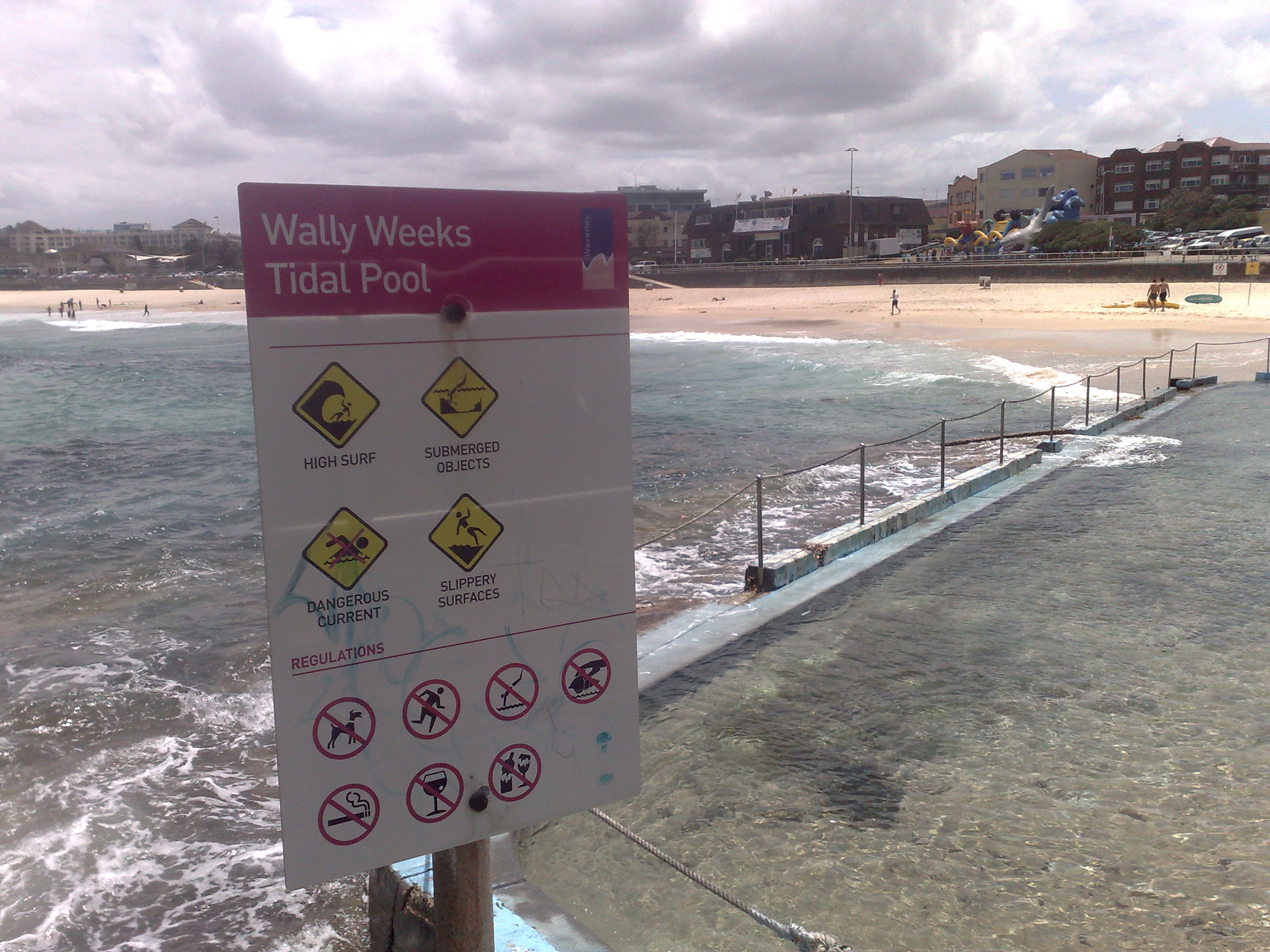 “You’re looking a little pink”, Andrew said to me late this afternoon. I guess it shouldn’t be a surprise, as it was an unexpectedly fine day in Sydney and I spent most of it outdoors.

When I woke this morning, it was overcast. Nonetheless, I thought we should go ahead with our plans to have lunch at the Bondi Trattoria.

Somehow though, something went wrong in our planning, and we ended up having lunch downstairs at the North Bondi RSL. “It’s very Eastern Suburbs”, we all noted, as we looked at the assembled crowd, which included a large family having a birthday lunch, assorted middle-aged couples, and lots of leather-skinned people.

Although Colin and I were both really happy with our meals (crumbed veal, spaghetti and crab), Andrew was still a little hungry after his meal (scallops). “Would you like some spaghetti?” I asked, with a reply in the affirmative.

I wouldn’t say it was overly expensive, though it was at the higher end of a lunch-time meal. And it was also quite noisy.

“There’s family, there’s friends, there’s workmates, there are knitters and a few odds and sods”, M-H said to me early in the piece. I was one of the odds and sods, by the way, having first met M-H at a GLBTI Bloggers Meeting during last year’s Mardi Gras.

I sat largely with the crowd of knitters, many of whom I met at the Halloween Party a few months ago. They’re a very mixed and lovely group of people who share an interest in knitting, and who are all a little bit odd in a really great kind of way. Lots of laughs were had.

I didn’t really get much of a chance to chat to M-H as she wandered around looking after everyone. I did, though, catch a few sneaky peaks at both her and Sandra. And you know what I noticed? I’ve never seen two people smile as much as they do. As they were chopping and cooking and washing, I looked over and saw two people who seem extremely happy in their lives. It was very very touch, I can tell you.

While I was invited to join some of the knitters for some late-night Singstar, Wii Karaoke thing (you know what I mean), I was feeling a little tired and was looking forward to getting home.

As I’ve arrived home tonight there’s a bit of a wild party upstairs. Well, not all that wild I guess. But there’s a group of young (twentiesh I’d say) men and women out on the balcony having one of those loud drunken conversations that can probably be heard miles away.

The main topic of conversation seems to be which celebrities are gay. “Are you saving The Wolverine is gay?”, I’ve just heard one bloke say to a female friend. She has responded with “absolute evidence” because she knows someone who knows someone etc.

And then… “What’s a gerbil?”, I’ve heard another say after being told the famous Richard Gere anecdote.

Leave a Reply to The Other Andrew Cancel reply