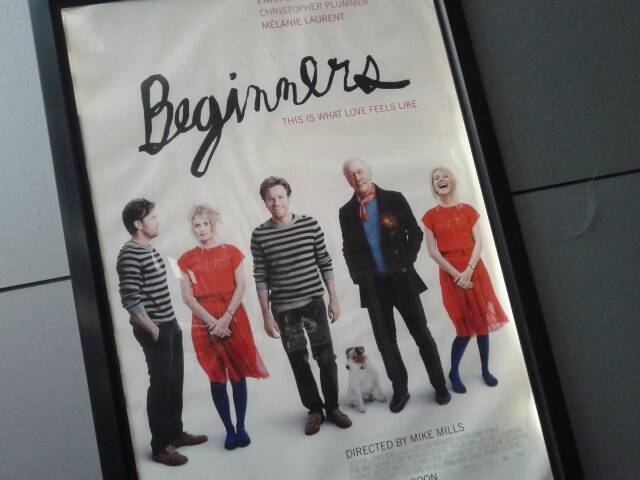 For several hours I’ve been trying to figure out why I liked, but didn’t love the film “Beginners”.

I first noticed the film a few weeks ago when I was visiting Sweden. The plot-line intrigued me: the story of a relationship between a father and a son, where the father had made the decision to “come out” in his 70s after the death of his wife. In addition, the film had the plot-line of the death of both parents in quick succession, a theme which I also understand very well. And on top of that, it featured Ewan Macgregor who I like very much as an actor, as he always seems to choose interesting, complex films in which to appear.

Further, a few colleagues had told me how much they’d enjoyed seeing the film. In particular, one colleague, incidentally a lesbian, who had told me she was expecting some kind of “coming out film” but that it was more than that. “Almost an art film”, she went on to say, describing the non-linear way in which the story was told.

“On paper, I should have really liked the film”, I’ve thought to myself several times in the hours since seeing it, but for some reason it just didn’t “work” for me.

That said, there were moments in the film when I was genuinely moved. There were times when I felt genuinely sad, and even cried, as I watched the film. The sadness tended to revolve around particular scenes and themes around relationships and death.

I thought the performance by Christopher Plummer was brilliant. He was completely believable. I also thought the role of the mother was an interesting one. Although somewhat of a character on the periphery to the plot in some ways, and almost a cliche at points in the film, I genuinely had the sense of her as a rounded, complex human being.

Sadly, I think the problem was with Ewan. The conclusion I’ve come to about why I liked, but didn’t love the film, was a feeling that he was holding back. Although I totally understand that he was portraying someone in the midst of deep grief, trying to make sense of his life, and trying to find a way forward, I just didn’t believe him.

Further, I didn’t quite understand why he was the central character in the film, as I thought both the father and the mother had more interesting stories to be told and understood. As a character, I thought his reaction to the death of his mother, the coming out story of his father, and the death of his father, was sadly, rather somewhat intellectual. Although he cried at one point during the film, I just didn’t quite “believe” his reactions.

The film explored some complex issues. In particular, the differences (and similarities) between love and relationships between the parents and the son which were interesting. There’s a wonderful line about how the parents just got on with life, whereas he had time to “indulge himself” in sadness. But at the end of the day, I was left feeling “get over it, Ewan”.

I’d like to see the film made again from the perspective of the relationship between the mother and the father. I think theirs was a more interesting story to tell and to be understood. In particular, how they went into a relationship and a marriage knowing the husband was gay, and yet managed to stay married for 44 years. I think it’s a far more complex story than a simple “marriage of convenience” or a “marriage of the 50s”.

That it was, instead, the response of the son to the story, a character who I didn’t really care much about, was probably the reason why I liked, but didn’t love the film. “Stop being so selfishly indulgent”, I kept thinking to myself of the character played by Ewan.