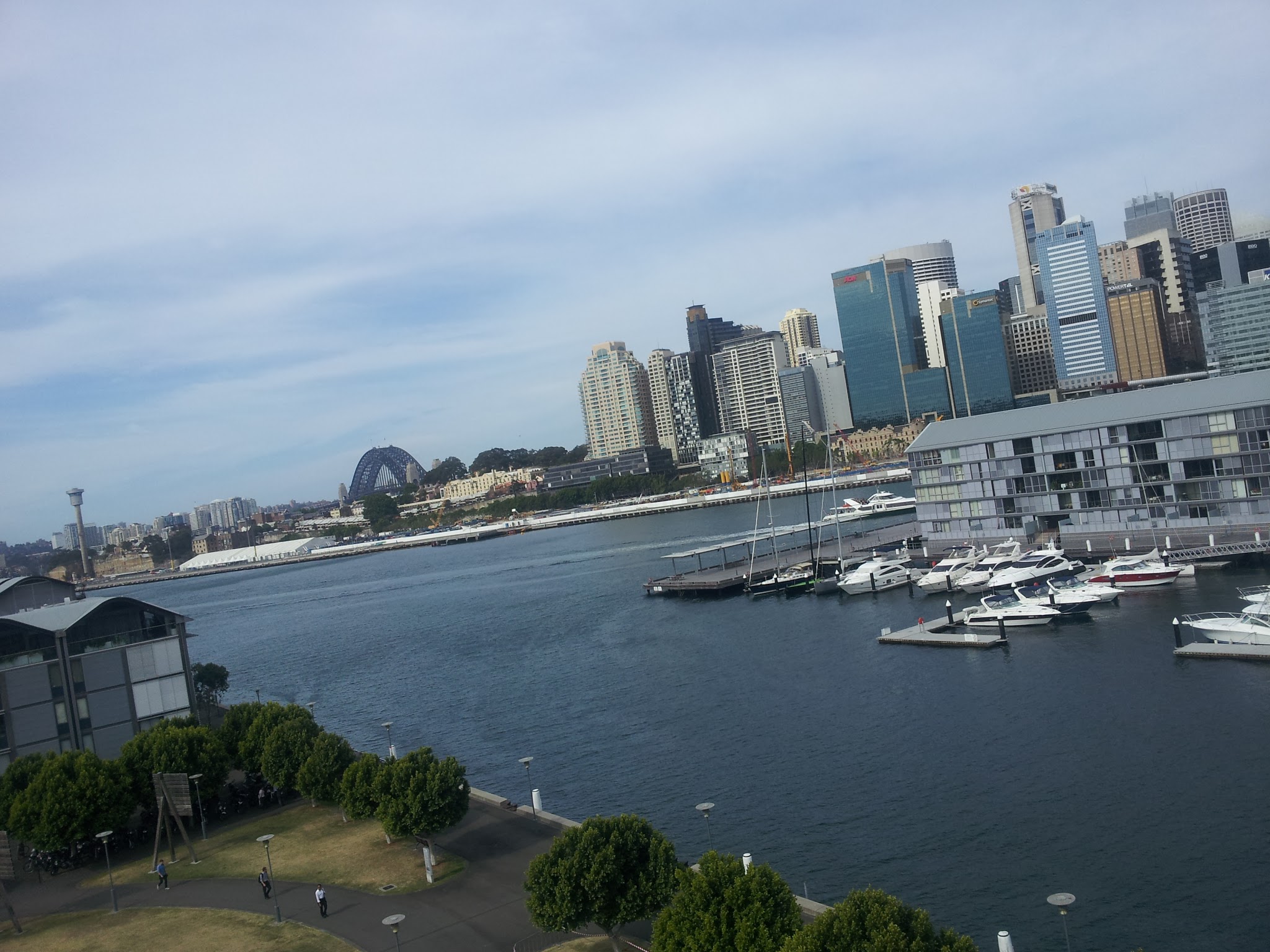 The view from the sixth floor cafe at Google HQ in Sydney is pretty damn good. Along with about 150 others, I participated today in a “Google 4 Media Day” held there which ended with a couple of glasses of wine. It was a lovely day in Sydney, with a nice breeze, and the perfect end to an interesting day.

Organised by the Media Team at Google here in Sydney, there was an obvious PR element to the day, as we were encouraged to use Youtube, Google+, Hangouts, Earth and other Google products. But there were lots of other interesting things covered which won’t necessarily lead directly to greater profits for one of the world’s largest companies.

“I’d never heard of Google.org until today”, I said to someone over lunch. Google.org is the philanthropic part of Google, where they support non-for-profit organisations, and do “good things” such as Crisis Response. One of the engineers who works on Crisis Response, based here in Sydney, Anthony Baxter (who has a wonderfully dry sense of humour) spoke about their recent work on public transportation in New York around Hurricane Sandy, as an example of how they’re working to create up to date information which can hopefully help people when they need it most.

The first part of the day, however, was spent going through some of the more advanced Google Search features, which I already use including searching by dates. Some time was also spent talking about Google Trends which I had read about, but hadn’t investigated properly. Trends allows you to get an idea of what people are searching for online, with the oft-quoted example of how they’ve been able to track influenza ahead of the game, and share that information with health authorities. “It’s not statistical”, was the common refrain from a number of people over morning tea, to which someone replied “think of it as a tip-off”. It’s just another research tool, I added to the discussion.

There was also a really interesting discussion in the morning about social media and journalism, involving people from Storyful, Mashable and the New York Times (more than half their audience is international, these days, apparently). There were a couple of interesting things which came out of this session, including an observation that, as data networks became congested (or unavailable) during Hurricane Sandy, many people used SMS to post to, and receive information from Twitter. The most interesting panellist, I thought, was David Clinch from Storyful. As I’ve sat down tonight and reviewed my notes, he was the one who said the things I most often quoted. My favourite quote from him, about social media generally, was that you’re not looking for “the wisdom of the crowd” but instead “the wisdom in the crowd”. He also made the argument media companies shouldn’t “waste time and resources on social media, if they aren’t going to directly lead to better content”. The session was conducted as a Google Hangout, and is now available to watch on Youtube.

I also really liked the idea of The Lives They Lived, based around one of my favourite parts of the New York Times, their obituary section. I really like their obituaries, as they’re always so well written. But this feature sought to “democratize” the obituaries, and asked their readers to write in about “ordinary people” who they knew who had died in the last year. I guess it’s because I like family history so much, that I think this is such an interesting idea.

There was also a session this morning about Youtube, and I was particularly interested to in CitizenTube which features curated and verified content from “ordinary people” around current news events. One of the most interesting statistics which came out from this session was that Australians were the third most likely, behind the US and Canada, to watch the recent Presidential Debates on Youtube.

Later in the afternoon, we split off into groups where the focus was on practical hands-on use of a number of applications particularly suited to use by media. There was a session on data visualization, one on Google Maps, and the one I attended, the session called “Getting Started with Google+ Hangouts”. Even though I’ve used hangouts (it took about ninety seconds to download the plugin and work out how to use), I was interested to learn more about hangouts. As well as the ability to interact with audiences in new ways, I think they have enormous potential for broadcast, including radio, as they can deliver reasonably good audio from up to ten people simultaneously. I’ve done a little experimentation with them at work, and have concluded that at this stage of the development of the product, and the lack of high quality broadband, they’ll probably work best in a pre-recorded environment. When the NBN rolls out, I suspect they’ll come into their own for broadcasters. Of course, there’s a lot of companies and products competing in this space, but significantly, Hangouts are currently free, whereas multiple person chats on Skype, for example, come at a cost.

I asked a question about which media companies in Australia had been using Google Hangouts. The early use by +Sunrise was mentioned, with specific reference to their multi-camera “behind the scenes” hangout. Having a look at the Sunrise page tonight, I note, their page hasn’t been updated since the end of August when they gained a new, simpler url. Nova was also mentioned, as was Fox Sports who have been conducting viewer hangouts with sports fans. Also on the sporting side of things, Carlton Football Club has been involved in a number of regular hangouts, where fans get to meet players, the coach, and other officials. I quite like their use of an animated gif in their Google+ profile page.

Sport has been a big thing for Google+, as has travel, photographing and cooking. “The best hangouts are those with a practical element to them”, Lucinda Barlow who is Head of Marketing Google Australia & NZ went on to say, showing us examples of cooking glasses, and even yoga glasses which have been conducted using Google Hangouts. A few weeks ago I showed by Swedish teacher how to set up a hangout, as she is interested in connecting with remote students, emphasising the educational possibilities of this platform.

It was also interesting to learn about the Lower Thirds App which allows you to caption your guests in a hangout.

Although I’m not one for “networking” at these kind of events, I did enjoy catching up with some other “media types” who I hadn’t seen for a while.