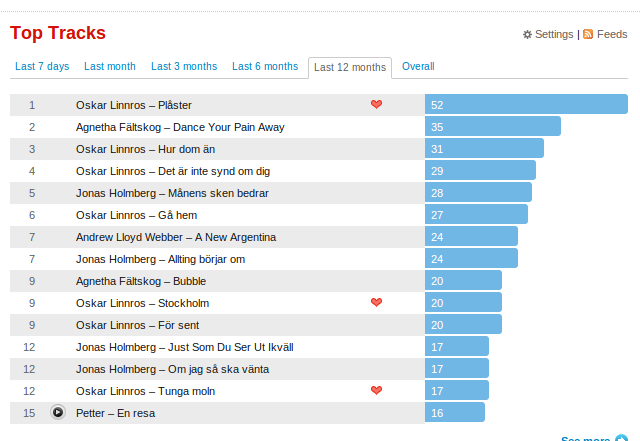 Musical Favourites for 2013 – The Year of Oskar Linnros

As I’ve sat down to look at the most commonly played tracks for the year, I’m kinda surprised it’s the song “Plåster” by Oskar Linnros. Not that I dislike the song, but I kind of imagined there were other songs I’d played more often the year.

That said, I’m using last.fm as my guide, and while it’s pretty good at picking up the music I’ve scrobbled, it’s not an entirely accurate guide to my listening preferences for the year.

That qualifier aside, these were the Top 4 songs I listened to in 2013.

2. Agnetha Fältskog – Dance Your Pain Away

For me, the real musical discovery of the year was Jonas Holmberg.

I wrote a blog post about him in August, saying…

After a couple of listens, I bought his two albums of Swedish language versions of jazz and pop classics, and they have been barely off my music player over the last two weeks. I’m listening again tonight. He has a beautifully clear voice and diction (good for improving my Swedish), sings with passion, and is backed by some wonderful instrumentation. Even if you don’t speak Swedish, his two albums are really very, very listenable. I’ve recommended him to my friend Grant (also a Swedophile) who was mightily impressed. From what I can see, Jonas performs semi-regularly around Stockholm, and occasionally has appeared on Swedish television. Hopefully the next time I visit Sweden, he’ll be performing somewhere, as I’d love to hear him perform live, and not only on recordings.

If I’d discovered Jonas before August, I’d guess this would have not been the year of Oskar Linnros after all.

Another great “discovery” this year was Carmen McRae’s version of Sounds Of Silence. Not a new song, or a new version, but I heard it for the first time in an ABC Shop, and it quickly became a firm favourite.

For pure sentimental value, this was another favourite from 2013.