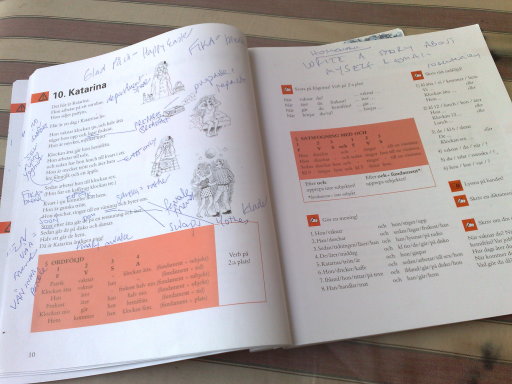 My Swedish is better when I’ve been drinking

Once again I’ve decided my Swedish is better when I’ve had a drink or two, or three or four.

I first discovered this a few years ago at a bar in Stockholm. I was chatting in English with a couple of Swedish guys, and when the topic got around to learning the Swedish language, I discovered my Swedish was far better after a few drinks. We enjoyed a reasonably fluent discussion after the third or fourth beer, as I recall.

The notion was further re-inforced when, after a boozy night in Stockholm, I happened upon a taxi driver who was taking me “the long way home”. I knew exactly where I wanted to go and how to get there, but I guess he assumed I was some dumb tourist from Australia, and so took a left turn when he should have taken a right, which would have resulted in a significantly higher fare. I was able to challenge him, negotiate the “right way home” and ensure he stopped the meter early to compensate.

Deep down, I think the “speaks better when I’ve been drinking” scenario is because when you’re feeling less inhibited due to alcohol, you’re also feeling less self-conscious about your failings, in terms of vocabulary, fluency and that “weird accent”. In short, it becomes more instinctive, and less “thought out”.

The “speaks better when he’s been drinking” scenario happened again the other night. I was walking home (and I’d had a drink or two) and surprisingly crossed paths with a couple of young women speaking Swedish. Our conversation, though brief, was almost fluent, even though I haven’t been to Swedish classes for most of the year, and I’m feeling a bit rusty.