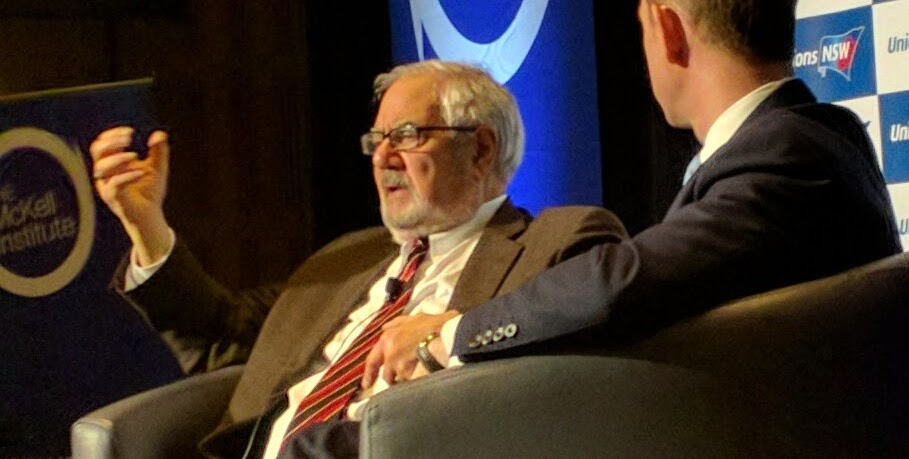 “I was once described to have a very radical gay agenda. I’m in favour of getting married and allowing people to join and stay in the military. I don’t think that’s such a radical agenda. In fact, I think that’s a rather bourgeois agenda”, said US Congressman, Barney Frank as he spoke tonight at Sydney’s Masonic Centre in a talk organised by the McKell Institute.

Why is he here? Well, he was invited by the McKell Institute, a left-leaning think tank,  but the “clincher” was the fact his partner, Jim Ready loves to surf. “I’ll come so long as you can organise for Jim to go surfing”, he told us, adding that Jim had been surfing “four days in a row”. Though I’m sure there are many other reasons, there’s also possibly the fact we’re in the midst of the Sydney Gay and Lesbian Mardi Gras.

Though Congressman Frank is known worldwide for his support of gay and lesbian issues, he remembers a time when things weren’t as positive. “I spoke to someone who told me he remembered when LGBTQ was ‘just G’, and I told him I remember when it was just ‘F’”, he said, as he spoke about how he attempted to join the US military as a young man, and was faced with the question of whether or not he was a homosexual.

Times have changed, and marriage equality has been achieved in the United States, in stark contrast to Australia. As he spoke, I reflected in my own mind, about how odd it was that the United States (traditionally, more recently more socially conservative on so many issues than Australia) was now leading on the issue of marriage equality. Thus, when he said, “Puritans moved to America because they didn’t want to be told how to live their lives, and ever since they’ve been telling other people how not to live their lives” (or words to that effect), I wondered more deeply about the issue.

He was quite dismissive of the decision to have a plebiscite (he called it a “referendum”) on Marriage Equality, referring it to as an example of politicians “ducking responsibility”. He further mused on why so much has happened so quickly in the United States on the marriage equality issue, compared with other civil right changes which have taken longer, noting “Gay people have lots of straight relatives. Black people, generally, don’t have many white relatives”.

And the future, especially with a US Presidential election later in the year, which could potentially be a contest involving the likes of Hillary Clinton, Bernie Sanders, Ted Cruz, Donald Trump and Marco Rubio? A key theme from both Trump and Sanders is they’re not part of the “Washington elite”. “Bernie Sanders has done an amazing job portraying himself as an ‘outsider’. After twenty five years as a Senator, I don’t see how he can be an ‘outsider’”, he said of the current Presidential race between Sanders and Hillary Clinton. He told us he was a strong supporter of Clinton, and that many of the “progressive” things achieved by former President Bill Clinton and current President, Barrack Obama had been popularly under-estimated.

“The Democrats will win by a big margin and The Republicans will be forced to respond”, he said, arguing their current right-wing focus will need to be re-assessed. He said he thought it would come down to a choice between Trump or Cruz, though he added Marco Rubio was also a possibility, even though he said he thought Rubio was a case where “there’s less than meets the eye”.

That’s one of the things I love about older politicians of both sides of politics. The older they get the better they are with acerbic observations about life. At tonight’s talk, Frank described how he had met and spoken with Paul Keating earlier in the day, known also for his great one liners. “Oh to be a fly on the wall for that conversation”, I thought to myself.