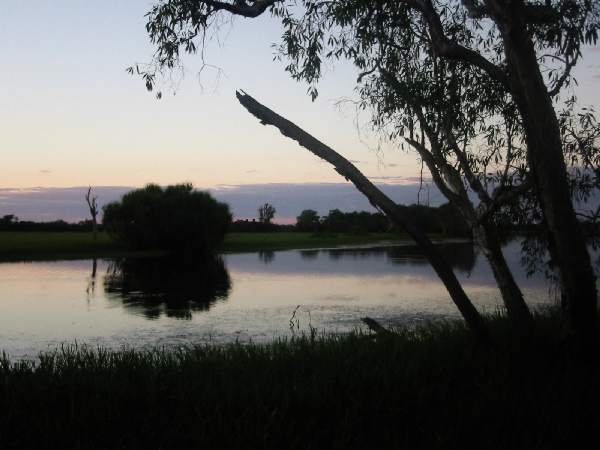 It’s Tuesday night and “summer” has returned to Darwin. After last week’s “cooler” weather, the warmer temperatures are back with us. I spent the weekend in Kakadu National Park and really noticed the difference.

I spent two days with travel company, Aussie Adventures, and a further day travelling with a friend and her family.

I was the first to be picked up by Peter the tour guide, who comes originally from Newcastle, but who has spent the last couple of years in Darwin taking adventure tours, making use of his degree in Environmental Science. I was so excited at the prospect of travelling that I didn’t sleep very well that night, so the 6.30 start was a bit of a struggle.

By 7.15, we had picked up all of the passengers from Darwin, a total of 12 people, aged mostly 25-35, although there were a couple of grey-nomads and two Norwegian backpakcers. Only half of the twelve would, however, stay with the tour for the weekend, returning instead to Darwin that night.

The first few hours of the trip were spent on the bus, as we passed the Marrakai Plains, Adelaide, Mary and Wildman River areas into Kakadu National Park. By the time we arrived at Ubirr Rock, an Aboriginal art site which overlooks Arnhem Land, I was well and truly ready to get out of the bus.

Unlike the trip with Damien a couple of years ago, this one was less rushed and so we had a couple of hours to explore the site and to enjoy the atmosphere.

In addition to the Aboriginal art, Ubirr is also quite special because you can observe three different types of land at the one sight – wetland, stone country and tropical savannah.

In the afternoon, we visited the Aboriginal cultural centre at Cooinda, where we camped that night, and enjoyed a 90 minute
cruise on Yellow Water.

Yellow water is a tranquil land-locked billabong that hosts a spectacular natural aviary of birdlife and crocodiles, which we managed to get very close to. So close, in fact, that one of the crocodiles got a little upset and made a splash so big half the people in the boat become drenched.

By Saturday night there were just six of us left: a recently married English couple; an older couple from Melbourne, a midwife from Western Australia and me. They weren’t an exceptionally brilliant bunch of people, but they weren’t total drop-kicks either. That night we had dinner at the bistro, sank a few beers, and watched a singer, Mr Wilson, who sang everything from Slim Dusty to Pearl Jam. He also sang “Home Among The Gumtrees” (four times) with appropriate dance movements. At about 11pm, and after the fourth version of “Home Among The Gumtrees”, I hit the sack.

We spent Sunday morning at Maguk/Barramundi Gorge, a waterfall with Katherine Gorge/Nitmiluk-like sandstone walls. After the one-kilometre walk – through a creek bed and over rocks – we were pretty pleased to swim in the plunge pool at the end.

Although we were told Saltwater Crocodiles are found all throughout Kakadu, and they make every effort to clear spots such as Maguk before the season is opened to tourists, we were all a little bit nervous about jumping in. All of us, bar one, swam over to the far end of the falls, which was pretty hardgoing, given the strength of the current pushing back.

We enjoyed lunch at the Anbangbang Billabong and then visited the Nourlangie Region. Curiously enough, Nourlangie Rock is incorrectly named, as the name Nourlangie is an anglicised version of the word Nawurlandja and refers only to the smaller rock, not the larger one.

The rock is home to some spectacular art, including a few examples of “contact art”, meaning art which portrays contact with Europeans, and not just Dreamtime Stories.

It was explained to us that each story can have up to a dozen different layers and that almost all of the “dreamtime stories” we hear are the ones usually explained to children.

As we approached Jabiru, I phoned Rachael (mobile contact starts about 10km outside of town), and made arrangements to meet with her and her family for the remainder of my weekend in Kakadu. As they were watching sunset at Ubirr, I spent an hour or so at the Gagadju Crocodile Hotel, which is designed in the shape of a crocodile which you can see quite well, I’m told, from the air.

As I made my way towards the camping ground, I became lost and rang Kate, who had stayed there a week earlier, for directions. Jabiru town was originally built as accommodation for workers at the nearby uranium mine, which can be toured. I would have like to have done that… maybe next time.

On Sunday night, we enjoyed dinner, a couple of glasses of red and played a late night game of Bocce, with cricket to follow on Sunday morning. I played on the girls team on both occasions.

On Monday afternoon, driving back from Kakadu, we visited the spectacular Mamukala Wetland, where it’s possible to watch the birdlife from a covered observation platform.

I spent Sunday night with my niece, Julie, her husband and child.