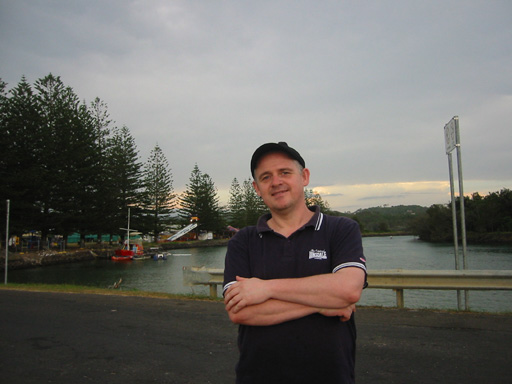 It’s Thursday afternoon. Another blisteringly hot day in Lismore. I’ve neither eaten nor drunk water for several days now. There is no moisture left in my body to produce sweat. I am near death. I am sure I will surely die. OK, so maybe that’s a little melodramatic, but it’s still bloody hot in Lismore. The only place providing adequate respite is Lismore Shopping Square. Gotta love that aircon!

Actually, I did get out a bit earlier this week. On Tuesday, Sue, Paul, Kerry and I spent the day travelling around the North Coast on a food and beverage fest. We started off at the Brunswick Heads Hotel. In the last twenty years or so, Brunswick Heads hasn’t really changed that much. While it’s nearby sister-village of Byron Bay has taken off as an international destination, Brunswick Heads remains a quiet family-oriented holiday destination. That said, property values are pretty high.

The Bruno is a good pub with a great beer garden. We had above-average standard pub fair underneath a wonderful shaded tree, although the service was a little slow. I ran into a colleague, Fiona at the pub, and we had a nice little chat before heading off for afternoon tea at a nearby cafe.

While sitting outside the local newsagent we noticed a throng of drunken young men wandering past. With shades of Cronulla, two of them had “AUS” (short for Australian) written on their stomachs. When we realised there was no evidence of violence, we decided they were all too young, drunk and silly for words and didn’t think too much about it. Though we did notice there were no police in sight!

With hunger pains returning, we though the Bangalow Pub would be a good mid-point for all of us to have dinner. Gathering a couple of beers, we headed into the comfortable booths in the backbar to peruse the dinner menu, which, frankly held little appeal. While the menu offered all manner of “jus” and “confit” we were probably thinking more along the lines of “Honey King Prawns”, and so passed up the delights of Bangalow, choosing instead the Mandarin Palace in Lismore.

For people of a certain age, the Mandarin Palace was often their first adult dining experience. With its offer of “Australian & Chinese Meals”, the Mandarin Palace recognises you shouldn’t confuse customers with the choice of cutlery or chopsticks. The menu, the decor, nothing had changed since the last time I went there on Boxing Day three or four years ago. Indeed, the waitress serving us was the same waitress who’d severed us twenty years ago.

But aside from that great adventure, it’s just life at home with the family, although I might wander out tonight to the aforementioned pub, The Winsome. It’s quite good fun, actually, as we have a new child in the family, Sammuel, who is crawling around the house at a rate of knots, is attempting to stand up, and loves nothing more than splashing about (and I mean splashing about) in his little swimming pool.

I’ll be back in Sydney on Saturday night and will post my “Year In Review” then. I’m not sure if it will be anything profound. I’m not sure if it will really live up to the title “Year In Review”. But I’ve been doing it for the last four years on this website, which I guess is far preferential than printing it off and mailing it to all my friends.