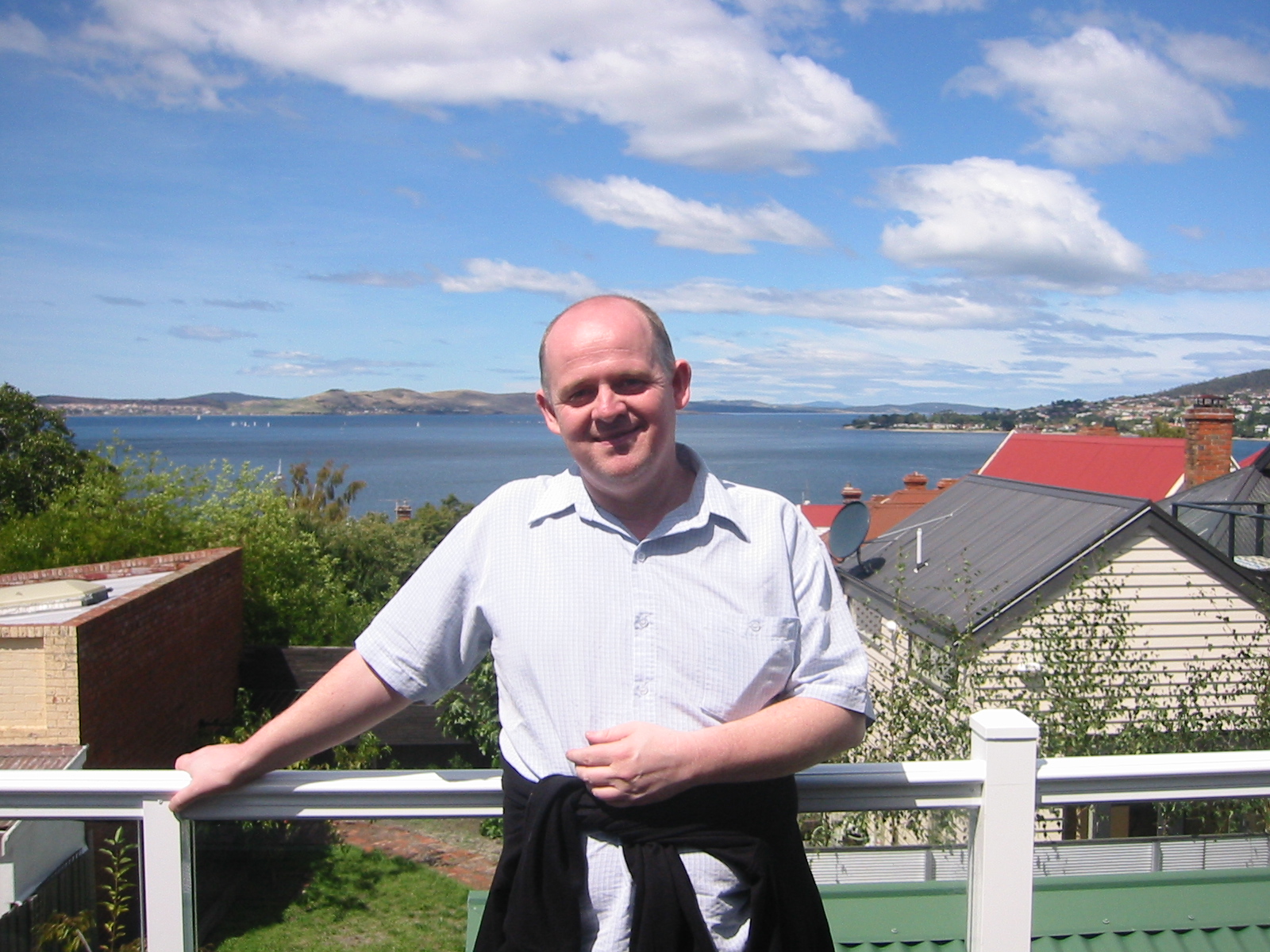 How soppy is that? But it’s actually a song that’s meant a fair bit to me for a lot of reasons. One of which is that I’ve turned forty and I’ve been reflecting on my life a fair bit. Another is that it’s a “show tune” from “Rent” and this year I’ve been finding a fair bit of truth in music.
Anyway, here it is, the end of 2005 and I’m still regularly updating this blog. As I look back on my life over the last few years, reading “Years In Review” for the last few years, I’m pleased to say I can clearly see a life progression.

Turning forty wasn’t so bad after all, although I did have a brief midlife crisis in the weeks leading up to the actual event. I began comparing myself with others, wondering about the lives of my peers, i.e. who else was born on November 9, 1965, and wondering if, due to a significant birthday, my life was suddenly over. I don’t exactly know why I felt that apprehension, after all, I’m reasonably successful and reasonably happy, I’m reasonably well-balanced and I’m reasonably spiritually content. But there was still, for a while, a feeling of “maybe I could have done something more, something different with my life.

The weather for my birthday was spectacular. I had lunch with Colin at the Bellevue Hotel at Paddington which was great. The Bellevue Hotel is one of those many street corner hotels in Sydney. With the exception of the TAB, the front bar is old fashioned with dark carpets and a great deal of timber. By contrast, the restaurant in the rear is a brightly lit white-washed walled renovation of what was once the hotel’s backyard. Colin and I both come from working class families in the country brought up on “comfort food” and so we both chose the Corned Wagyu Silverside with White Sauce, Cabbage, Carrots and Mashed Potatoes as the main course. The silverside was thick and tasty and the source accompaniment was excellent. Colin, who describes himself as a connoisseur of mashed potatoes, thought they were excellent.

Having silverside though reminded me of a story from my teenage years when my dad arrived home one night very drunk. Mum, disgusted with his behaviour, went to bed telling him there was no dinner for him. The next morning, however, dad awoke to tell mum that he’d loved the soup she made for dinner – he’d drunk the left over water from making silverside.

Unfortunately, I’ve only been home once this year, briefly, co-inciding with Briony’s Wedding, for a number of reasons, but mostly because work was so incredibly busy this year. You’ve read about it in the papers, so I’m not going to talk about it here.

I did manage, however, to do a fair bit of localised travel this year, including a Queen’s Birthday visit to Coonamble, a small town in Western NSW, not far from Bourke, about 553km from Sydney. It’s on that broad flat black soil country – with occasional touches of red soil – that only comes from really getting away from the coast. But it was well worth the drive. I also travelled with work a few times, including to Hobart, which I really loved.

As I mentioned earlier, I’ve found a lot of truth and honesty in music this year. One of the many highlights was the Dianne Reeves’ performance at the State Theatre. As much as her upper range could soar, almost piercing your ears, her lower range could literally cause the theatre floor to vibrate. She’s coming back in 2006 – can’t wait. Bette Midler Live was also was honestly the best show I have ever seen. It worked on so many levels, displaying honesty, intelligence and passion. For me, the two most emotional moments were when she sang “The Rose” and “Tenterfield Saddler” (encore). As she sat on the floor, she asked the audience – nay, insisted the audience sing the words. As we mumbled our way through the words we didn’t know we all laughed. And I just love “Tenterfield Saddler”.

On an entirely different level, I also really enjoyed travelling to Newcastle to see Cher. Her performance was excellent, although I did notice a couple of things. I noticed for the first time the limitations of her strong, but limited vocal range. I also noticed that although she’s surrounded by people who dance and do acrobatics, she doesn’t do all that much herself… just the occasional shimmy. And why not? She’s 60 years old which she, herself joked about, commenting that this would definitely be her final tour and that she wasn’ going to re-emerge in a few years time in one of those people movers popular with older people. I also nearly choked when she introduced a song as “This is my first number one from July 1965”, as it was actually before I was born.

Unfortunately, I misjudged the train schedules and ended up stranded at Gosford.

Also memorable was Elaine Paige. She started with an encore! Yes, Elaine Paige came to the stage of the Sydney Opera House with the kind of song she’d normally be asked to come back to perform. In fact, when I think about it, most of the night’s songs were the kind of song you’d perform as an ecore.

On a more localised level, I went to see Tim Draxl and David Campbell. This was the first time I’ve ever seen David Campbell perform in cabaret before. The only other time I’ve seen him live was in the musical, “Only Heaven Knows” about 10 or so years ago at the Sydney Opera House. And so I was both excited and curious about going to the show at what I think is Sydney’s best cabaret venue, Bar Me. Back in April, I saw Tim Draxl at the same venue and I suppose I can’t help but make comparisons between the two, especially as both were discovered by legendary Sydney cabaret producer, Les Solomon. Campbell is clearly a much better performer, far more in control of what he does, evident in the eclectic selection of material. Unlike Draxl, who stuck fairly closely to the standard show tune formula, Campbell was more willing to take a few more risks, including numbers by Johnny O’Keefe, for example and in Mr Bojangles, unafraid of the obvious comparisons with every other performer who has sung the song before. But because he was seemingly unafraid, he delivered a truly magnificent version of the song, easily the best I’ve ever seen performed live. Sometimes, however, I thought Campbell oversold songs a little too much, sometimes he was a little too physical. And although it’s not a bad thing too sweat on stage, sometimes I thought he sweated where he didn’t need to and perhaps he could pick up a thing or two from Draxl in underselling a song.

The best movie I saw this year, without doubt, was Downfall. Although ostensibly the film deals with the decline, fall and suicide of Adolf Hitler, it’s about much more than that. Indeed, Hitler’s suicide occurs at about two thirds to three quarters of the way through the film, with the remainder concerned with the downfall (and perhaps redemption) of other characters. For me, however, the most distressing part of the movie was the end which features the stock-standard “what happened to” feature of so many historical dramas. It amazed me that so many people had lived so long with the memories of the war and of the events portrayed in the film. And then, just when you think, that’s about it, one of the central characters, the young secretary, is shown in documentary footage in her 70s or 80s, reflecting on her life. She tells the story of how, throughout the Nuremberg Trials, she was surprised at the extent of the Jewish extermination. And then, in a truly remarkable moment, she mentions how, in a moment of self-relevation, she recognised she could have known more, she, perhaps could have done something.

When I reflect on this year, I can’t decide (at this stage) about whether or not all of this activity was a distraction or perhaps an opening to a new part of my life. In some rspects these kind of thoughts came to a head in October, wandering around Sydney one afternoon. There was an AIDS function, there was an Italian wedding, there was a ceremony commemorating thirty years since the arrival of Vietnamese boat people. And that’s when it synched together. All of these things were about meaning. The Vietnamese boat, the AIDS ribbons, the Italian wedding. They were all about people finding meaning in their lives which, in an increasingly materialistic society, was an optimistic sign for the future. I’m not writing about this in some kind of preachy way, but I suppose as a really interesting awakening to parts of Australian culture which aren’t necessarilly celebrated as much as they perhaps should be. And it all happened so naturally walking around Sydney.

In contrast, as you will have read from the news reports over the last few weeks, we’ve seen the worst in a small group of Sydney siders. I don’t write about politics on this blog, but I don’t think that what’s happened is about politics. It’s about ignorance and opportunism and it’s probably also about how fine the line between civility and anarchy can be.

My favourite pithy comment about what occured was published on the 702 ABC Sydney Guestbook:

These disturbances have many causes which we all have to sort out–tribalism; the politics of division, testosterone, alcohol, etc. I hope we can learn how to live together, multiculturalism strenghtens a society and makes it more vibrant. Some of us are about to celebrate the birth of someone of middle eastern appearance and may we all find some good will toward each other in true Christmas spirit.

Thinking about my life this year I’m reminded of that moment from the “Tales Of The City” TV show when Anna and Mary-Anne were sitting around with a couple of stoned hippies and they asked the question “What was the best year of your life?” While the stoned hippies remember something from the 60’s (of course), Anna reflects that the best year of her life hasn’t happened yet. And I guess that’s the way life is for me. There’s still lots of adventures.