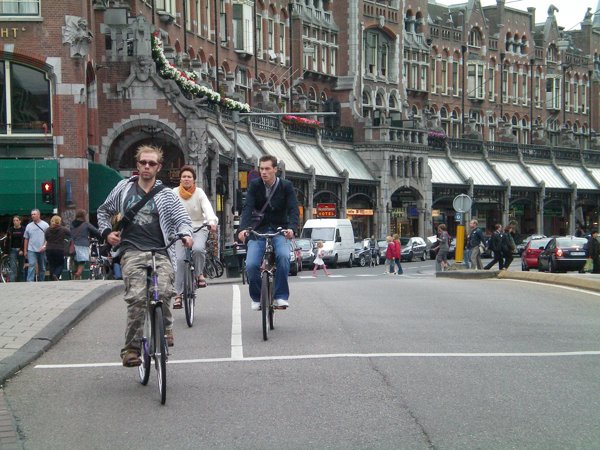 Thank God for Marco and Sandra

Accommodation has been a really big issue for me here. That is, finding decent accommodation at a reasonable price. The internet has been pretty hopeless as a research tool, actually. The accommodation I had last night had a certain “brothel like” quality about it. As I passed a woman on the way to the bathroom, she smiled at me in the way that could only suggest she didn’t only use her room to sleep in. I ended up at the Travel Hotel because the hotel I booked had already reallocated my room by the time I’d arrived. With just ownership I was sent around the corner. It was too late to argue.

The major problem I think was that it was also just a little too close to the Red Light district for my liking. And while I’m quite a libertarian in many respects, I learned this trip I’m probably actually a little conservative in my tastes when it comes to the combination of really seedy sex and widespread marijuana use.

And then tonight, I’ve booked into one of the most expensive hostels I’ve found on the internet. It was a fair walk from town, quite expensive by hostel standards, and the photographs and reviews on the internet looked quite reasonable. For that reason, I’ve been willing to give it a bit of a go.

And besides, when I booked in earlier today, I was already with Marco, so didn’t want to waste too much time fiddling around. Big mistake on my part. The room is tiny and over-crowded. The bathrooms are totally rank. It’s noisy. The kids here seem okay, but you just have the feeling the place is over-priced for what it constitutes, and that they too, feel like they’re being ripped off.

Or maybe I’m being precious? Or have I been spoiled by having stayed at the “Gucci” of hostels, the Czech Inn in Prague? No, I don’t think so, the Marnix Hotel on Marnixstraat is, in my view, well below average for what I’m paying. But it’s late at night and I don’t have too many options at this stage, so I’ll stay and look for somewhere else in the morning.

On the good side of things, I was really lucky on the plane to get a seat in the front row. And while there were three big boofy (and noisy) blokes squeezed into their seats on the left hand side, it was just me and a flight attendant returning home on the right hand side.

The flight over the land and sea was wonderful. We were given a tremendous view of the big sea wall, and remained close enough to the ground to be able to see a fair deal, including all of that water, the windmills, and the beautiful green fields.

On top of that, there’s been Marco and Sandra. They’ve made me feel incredibly welcome. We’ve been out for lunch, we’ve chatted about ABBA and other stuff, they’ve offered me loads of wonderful advice. And then tonight, Marco took me out for a wonderful dinner, and showed me a really nice bar called “Soho”.

Marco also took me to a wonderful cafe, Cafe Rooie Nelis on the recommendation of a friend. Seated inside were this wonderful old Dutch could who might have been minor celebrities in their time. All over the walls there are photographs of them with various celebrities, and on the jukebox, they’re playing what Marco described as “some typically Amsterdam music”.

In the midst of the grim issues associated with accommodation, I can only say “thank God for Sandra and Marco”. They’ve made me feel incredibly welcome.