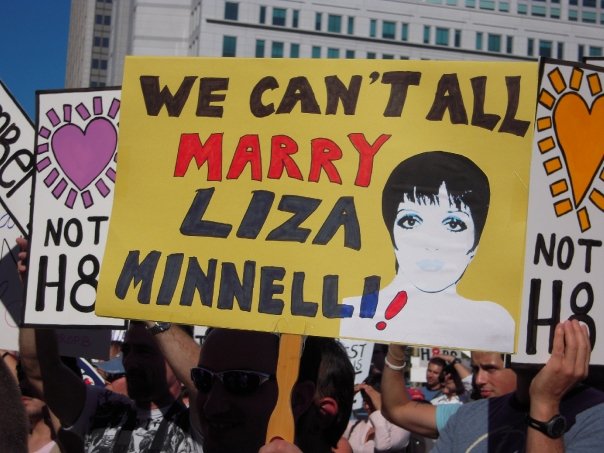 Twelve months ago, today, I was attending Stockholm Pride in Sweden. A bit like Mardi Gras in Sydney, they have a big parade throughout the city leading towards Pride Park.

Interestingly and co-incidentally enough, there was a Same Sex Marriage Rally in Sydney today, so I headed along to Town Hall at around lunchtime. I listened to a few of the speeches which were interesting enough. The only reference that made me cringe a little was when one of the speakers referred to a “Commitment Ceremony at Byron Bay” which seemed a little too North Coast PC for my liking. “Oh my goodness”, I thought to myself, “I’ll bet they were naked on the beach too”.

Anyway… just as I was about to leave and head home, I ran into a friend, Greig, who I last saw last weekend at a party he hosted. As we chatted, we observed very few of our friends were probably that motivated to come along. For some it’s an issue that doesn’t bother them all that much. For others, it’s something they’re actively opposed to for a variety of reasons. If push came to shove, and I was lucky enough to find myself in a relationship, I probably wouldn’t be all that interested in participating in a marriage ceremony, but you never know.

So just when I thought I might head off home, I thought I might as well stick around and Greig and I could keep each other company. So, we decided join the walk to the protest rally outside ALP National Conference. It was a good fun thing to be part of an estimated crowd of say 2-3,000 people, as we walked down George Street towards Darling Harbour.

As a number of people noted, there was a time not so long ago when there was a ban on inter-racial marriages. I suspect it’s just a matter of time until the laws are changed in regards to same-sex marriages, also.