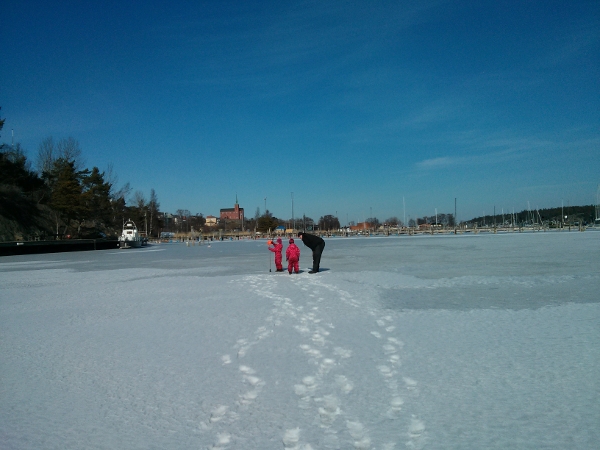 You Could Drive A Car On This

“You could drive a car on this…”, a nice Swedish bloke told me when I asked him about the thickness of the ice of we were standing on. As we walked around the frozen waterways at Nynäshamn (about an hour by train south of Stockholm), he’d caught our attention. He was standing out in the middle of the iced waterway, along with his twin six year old daughters. Having walked on ice a couple of days ago, Sue wasn’t all that interested when I suggested we take a walk out to find out what they were doing.

“Excuse me, are you fishing?”, I asked him. I explained we were tourists from Australia and the sight of him digging a hole in the ice made us curious. The mention of Australia, like many of the people we’ve met on this trip, elicited an anecdote about a visit there many years ago. He and a friend had spent several months digging for opals at Lightning Ridge, he told me, adding that his friend, who stayed longer, managed to come back to Sweden with enough money to buy a house.

“The ice is about forty centimetres deep”, he told me, adding you can drive a car on ice with a thickness of little more than ten centimetres.

We went on to have a lovely chat about our lives. He explained his wife’s mother, his wife, and now his twin daughters had always lived in the town, and within thirty metres of the same location.

He also offered a few tips about things we should see in the area, including taking a walk along Strandvägen, the road that leads to the beach. “It’s one of the most beautiful drives on the east coast”, he told me. Sue and I took his advice. As the snow and thick ice gave way to thinner ice, and then finally the ocean, we both agreed the area was very beautiful. As we walked along there were lots of people out and about enjoying the public holiday, the sunshine, and the sheer beauty the walk affords.

After a while, though, we wondered where it would lead. Have we gone too far? Would we find ourselves stuck in the middle of nowhere? We agreed to ask the next person coming in the opposite direction. We approached a woman in her 60s. She also had an anecdote about Australia, having visited friends in both Sydney and Melbourne. On her advice about how much further we could walk, we both agreed it made sense to walk back into town and catch the train back to Stockholm.

As we made our way back, I noticed the bloke and his two daughters were no longer out on the waterway measuring the depth of the ice. This begs the question: why were they out digging holes in the ice to measure the depth? Was it part of his job? Research into global warming? “My daughters think it’s fun” was the simple answer he offered.