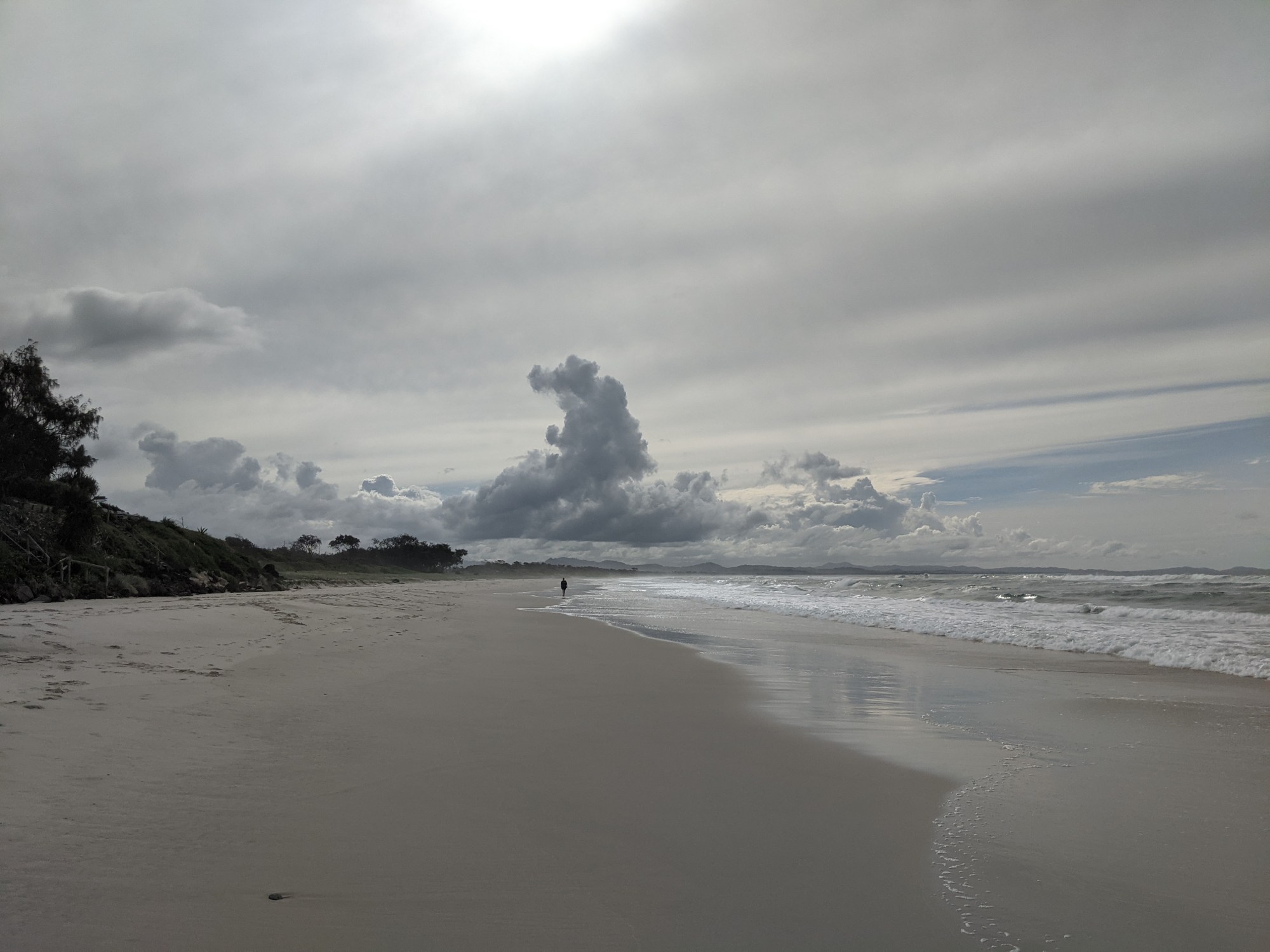 “I didn’t know there was a caravan park in Byron”, one of the nearby passengers on the bus yelled out. To be honest, I was thinking the same, as all you read about in the papers these days is million dollar homes and celebrities. “No, it’s a RESORT”, the bus driver replied to the amusement of the passengers. “It looks like a caravan park to me”. I thought to myself.

The bus from Lismore to Byron takes about fifty-minutes and is only $5.90 for a full adult fare. That’s only slightly longer than the trip by car, and at only a fraction of the price. Bargain! The only downside was the delays due to roadworks.

It’s probably a decade (maybe more) since I last visited Byron. I don’t exactly remember when it was, but I remember it was a group of friends from school. We all live “away”, and we thought it would be fun to go back and see what all the fuss was about.

When we were growing up in the 70s and 80s, Byron was a fairly sleepy little place. I remember a primary school visit during the 70s when much of the write-up we did revolved around the goats on the hill near the lighthouse and whaling.

Whaling occured at Byron from the mid 50s to the mid 60s. A family member, Jack remembers sitting on the beach at Byron and seeing the large carcases on the beach. “God, they stank”, he has often remembered.

Byron is a much different place, now. The last time we visited it was quite busy, and I remember us thinking it was a bit like Bondi. “North Bondi with crystals” is how a friend described it, and she should know, as she lives at North Bondi.

But it was a Tuesday, and it was out of the peak tourist season, so I decided it would be good to catch the bus to Byron for the day, to see what it was like when it wasn’t at the tourist season peak. And you know what? It was pretty good. Not exactly the over-populated tourist town I was expecting, though not exactly old style Byron either.

The first place I called into was the Beach Hotel. I grabbed a spot near the entrance, and so I was able to have a view of the beach, and keep an eye on the people coming in for lunch. There were a lot of retired people who, by the sounds of the men at the nearby table, spent a lot of time talking about their illnesses. There were a few family groups. There were tradies. There were “matching gays” (ie gay men dressed identically). There were no celebrities in sight.

I then took the coast walk down to Wategoes Beach, the beach where, as a child, we used to regularly visit.

As I wandered down the coastal walk I overheard two women have what I thought was the most “Byron” conversation EVER, as one of them said, “Yes, I’ve been in the cryo, but never a floation tank”. Don’t worry if you don’t know what cryo is, because I had to look it up too. “Cryotherapy is the use of extreme cold to freeze and remove abnormal tissue. Doctors use it to treat many skin conditions (including warts and skin tags) and some cancers, including prostate, cervical and liver cancer. This treatment is also called cryoablation”

Eventually, I found myself at Belongil, a really beautiful beach that goes on for several kilometres. I walked and swam. I swam and walked. Eventually, I realised I’d probably walked too far to return back to Byron, and so I kept going until I found the next spot to get off at.

“That’s an interesting beach you found yourself at”, a colleague who lives nearby said to me yesterday. Yes, indeed, it was. The next stop up the coast was Tyalgum Reserve, which is a “clothing optional beach”. There weren’t a lot of people around, and so it was almost as if I had the beach to myself. Between Byron and Tyalgum, I swear I passed maybe a dozen people in total. It was bliss. And when I got to Tyalgum, I looked around thought to myself, “what the hey…”