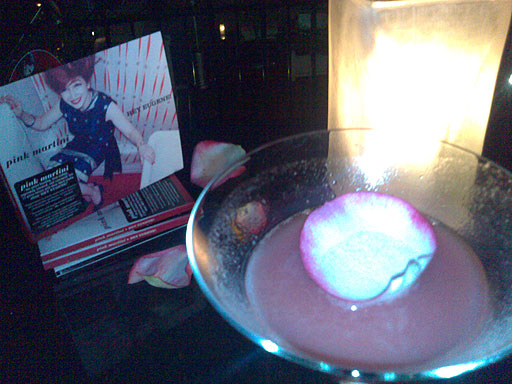 Andrew and I went to a function tonight for the launch of a CD called Hey Eugene by the band Pink Martini at Hugos Pizza in Kings Cross.

Upon arrival, one of the most significant concerns for Andrew was a grammatical one: the apparent lack an apostrophe in Hugos Pizza. Although I argued the case that Hugo perhaps wasn’t a person and he wasn’t having ownership of the pizza, and that it was a proper noun, Andrew remained unconvinced. Okay, so I was playing the devil’s advocate…

But did we worry? Nah, we had a great chat about the world, the universe and everything, and maybe nothing in particular. We also enjoyed the pink martinis (made pink by their use of Nudie juices) and the delicious Hugos (not Hugo’s) Pizza, and we enjoyed the music.

We both agreed the music sounded very good, and we both sampled a CD which we thought was the kind of music we would actually play at home. It’s kinda Latin-sounding, it’s kinda funky, it’s kinda cabaret. It’s kinda all of the above. I’ll be listening over the weekend in great detail, and no doubt Andrew will be posting his comments soon.

Otherwise it was a day for busyness at my business, with a whole bunch of stuff occurring. I both love and hate the fact that every day at work provides me with something new to think about. I never feel like I’m working in a sausage factory which is a great thing.

I’m also quite busy socially at the moment. Over the next few days, there’s a major birthday coming up for Kate and I’m going to see The Simpsons movie on Saturday (please don’t post any spoilers) followed by dinner with Damo at the very new and funky Foveaux Restaurant & Bar. And then on Sunday, I’m having a meeting of my art group, followed by a repeat performance of Company which will presumably include “the missing songs”. And then Andrew and I have decided we’re going to head along to the Blogger Meet Up which will, presumably, be a bit of fun, even if we’re probably also both the oldest in the room again. If you read this blog, why don’t you come along too?

When: Sunday 29 July (Rain or shine) From 5 pm (we may not get there until 5.30 though, due to earlier commitments)
Where: Tilbury Hotel, Woolloomooloo
How: Look for the Blogger Sign