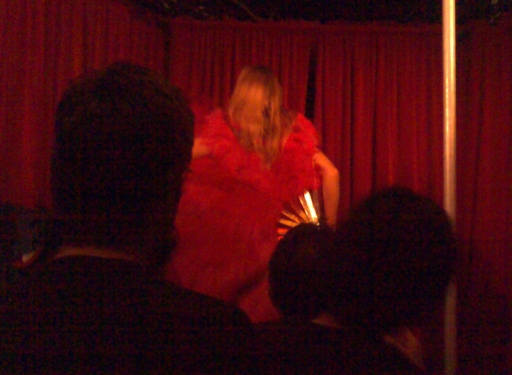 In the last twenty-four hours, I have begun to seriously question my sexuality, and I blame the “Unisex Amateur Strip Night” at Sydney’s Newtown Hotel. In an otherwise lacklustre lineup, there was only one stripper last night who you might even begin to see as somewhat sexy, and she was the reigning Miss Nude NSW.

Having previously attended the Grand Final (and heat) of Season One of the amateur strip night, I was very excited when I noticed the posters appear a couple of weeks ago announcing another competition. And in the same week that a political scandal had erupted about Kevin Rudd’s fifteen minutes of fame in a New York strip joint, I felt sure that acclaimed drag artiste Vanessa Wagner would have some very funny jokes to make and maybe, just maybe, someone would have the comic time to appear on stage as Mr Rudd himself, before stripping down to some knee-length socks and white BVDs (yes that’s how I imagine Kevin might appear). Alas, it was not to be.

Sadly, Vanessa was on holiday in Thailand, replaced by the very fine Nurse Betty (or something like that). Sadly also they were clearly struggling for contestants. Thus the lineup included only one actual contestant, who took an awfully long time to take his clothes off. And while my fellow attendee, Papertrap thought that was okay, The Other Andrew rightly observed he was pretty lame. If you can imagine yourself having gone out for a night with friends and having consumed a beer or thirty, and then on your arrival home, you start taking your clothes off at the front door, and by the time you’ve made it to the bedroom some ten minutes later you still haven’t managed to get your pants, shoes and socks off before you finally collapse on the bed. If you can imagine all of that, you can imagine the only real contestant last night.

So that meant they needed to make up the numbers with an assortment of others including a comic female stripper in an anatomically correct bodysuit; a self-declared professional male stripper (I can’t imagine you would actually pay); a drunken/stoned audience member; and one member of the regular bar staff who as Papertrap observed bore a remarkable resemblance to Gollum from Lord Of The Rings, only hairier.

Actually, it wasn’t all that bad. We enjoyed an earlier meal, had a good chat, enjoyed a few laughs and drank some fine beers. And of course, we got to see Miss Nude NSW perform her act. She was pretty good as she used feathers and such, and her use of a Nick Cave song was truly inspired. And compared to the others, she was pretty sexy. So on the Kinsey Six Point Scale, you can probably now put me down as a 5.9, I suppose.