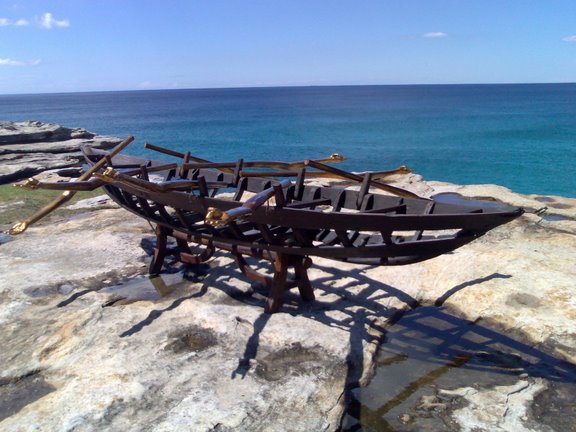 Even though it’s an absolutely beautiful day, and I know I should be outside, I’ve just woken up from a brief afternoon nap. I was up reasonably early (for a Sunday), as I had to go to Tamarama this morning for “Sculpture By The Sea”. On top of a reasonably late night last night, I found myself a little tired by the time I arrived home at about one o’clock. Walking in the door, I took off most of my clothes and headed straight for the couch. Ah, don’t you love Sundays?

Life’s funny, though, isn’t it? You can spend weeks on end with nothing terribly much happening in your life, and then suddenly you find yourself with hardly enough time to scratch yourself. This week, for example, I’ve been to see the new Brad Pitt film (Wednesday), the launch of the Sydney Festival at the Opera House (Thursday), drinks with Laura who is back from London (Friday), and to see the play, “Holding The Man” with my friend Sue, who is visiting from Melbourne (Saturday).

I got a phone call from Michaela on Tuesday, I think, asking me if I wanted to see the new Brad Pitt film, for which she had won some tickets. Aware that I had a fairly busy week, I ummed and ahhed for a while, until I finally thought to myself, “ah buggar it”, I’ll just go anyway. In this film Brad Pitt “returns to arthouse” (as Michaela put it), playing the American outlaw, Jesse James. Aside from the many cinematic references to Jesse James over the years, I wasn’t overly familiar with his story, aside from a vague understanding he was their equivalent to Ned Kelly. Unlike Kelly, however, James was shot dead by a member of his own gang. And while much of the film is about James himself, it’s also about the man who shot him, speculating on the reasons why it occured, and providing some insight into the life of the man after he shot James, and the reasons why James became a “folk hero”. Although it’s a comparatively long-film (2.5 hours), I never felt the time drag as we watched it. Indeed, by the time it finished, just after nine o’clock, neither one of us was ready to go home to bed, so we headed down the Spanish area of the city and enjoyed Tapas and a bottle of red. That was Wednesday.

I had to be up early on Thursday morning (5am start), so I didn’t really have all that much sleep that night. Luckily I was able to leave work a little earlier, and head home for a nap before heading off to Opera Bar for dinner with Colin and Vanessa, and then to the launch of this year’s Sydney Festival. Compared with previous years, there’s a lot more music and dance this year, and I love the way they’ve expanded the number of large public events.

It was another busy day at work on Friday (gosh the tax-payer gets good value for money in employing me!), before heading off to catch up with Laura who is back in Sydney for about six weeks, before heading back to London (or maybe New York). Hopefully, she’ll be in NYC when I visit there next year.

And then last night, my friend Sue and I went to see “Holding The Man” at Belvoir Street. As I’ve mentioned previously, Holding The Man is a very special book and play, which means a great deal to me. It’s both extremely funny and extremely sad, and once again last night I had a bit of a cry. I think the play means a lot to the cast too, as both Sue and I thought the performance given last night was terrific, especially by the actor who plays Tim. “Did you think he was really crying?”, Sue asked me. “Yes, I did actually”, I told her, as the look on his face and the tears in his eyes seem to indicate to me that whatever emotions he had summoned up for the final moments of the play were clearly very strong ones. I sat opposite him on the bus the other week, by the way, which was a bit of a thrill.

We then came home, ate some ice-cream, had a cup of tea, and chatted until about one o’clock this morning.

“Your alarm’s going off”, Sue shouted through the door of my bedroom this morning, just after seven o’clock. Despite the late night, I needed to be out of bed reasonably early this morning for Sculpture By The Sea. At about seven o’clock the sky was still very grey, and I wondered briefly if it was worth bothering going down given the inclement weather. Within an hour or so, the sun has started to appear and by about nine o’clock there were beautiful blue skies over Sydney.

It was the first time I’ve been to Sculpture By The Sea for a number of years, and I was reasonably impressed with most of the statues on display. The warm weather brought with it good crowds, and I sometimes found it difficult to really appreciate the works, surrounded by thousands of others. I might take the advice of my friend Colin and go back sometime during the week if I can get a moment away from work. “I always go mid-week at about eleven o’clock in the morning”, he told me on the phone yesterday, “when it’s just me and the little old ladies”.

Right now, though, I think I might head down to Darling Harbour where there’s a European Travel Expo currently underway.

P.S. It’s my birthday this week and I will be having drinks from about 6.30pm Friday at a TBC venue. Although a workmate reckons we should go to Pontoon, I’m not so sure. I’m thinking inner-city cheap pub myself. Or maybe Opera Bar which, amusingly, a friend told me this week is known on Friday nights as the “Dry Cleaners”: it’s where you go to pick up a suit!