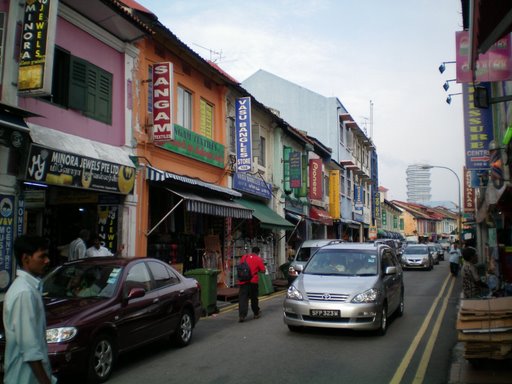 You remember how I said “Little India” was the probably most interesting part of Singapore? Well, it’s also probably the noisiest. It took me ages to get to sleep last night. There were times when I was tempted to go down and at least watch, if not participate in the nearby karaoke, but in the end I opted for bed. Yeah, I know I should have just done it, adding yet another experience along the way, but in the end the warm shower and the air-conditioning was too much to resist.

Thus, when I woke this morning at about six I was well and truly-rested. I also didn’t have to worry about running around trying to organise mysef, as I’d washed some clothes, had charged all of my batteries, and was packed. There was no last-minute rush to the airport this morning.

Although the motel offered a free breakfast, I was however determined to get to the airport, get though customs and check-in as quickly as possible. While there, I made a quick call home to my sister to reassure her I hadn’t been kidnapped and was well and truly alive.

I’ve been lucky, once again, with my seat. I’m just behind first class in a small room that contains about 30 seats in a 2-4-2 configuration. There’s plenty of leg room and plenty of room to move around. The in-flight cuisine has been okay , though not as good as Singapore Airlines. More on that later.

The in-flight entertainment has also failed to live up to Singapore Airlines. Unfortunately, the plane doesn’t have those groovy little personal screens Singapore does. So instead we’re all watching the same movies.

The first was a new Kevin Spacey called “21” which I didn’t bother with. You know how some films just look like rubbish, and so you don’t even bother with the headphones? The second, “The Other Boleyn” was actually quite good. It features Scarlett Johanson and Eric Bana, and it re-tells the story of Ann Boleyn from the perspective of her elder sister, Mary. I don’t know how accurate it is, but it was enjoyable nontheless. I haven’t worried with the third film either, as it’s the new Nicole Kidman fantasy film that was universally panned. Without sound, it looks like rubbish. The only interesting thing I’ve noticed about it so far is that Magda Szubanski plays a brief, supporting role.

Speaking of Australians, I’ve come across the odd Aussie accent a couple of times so far. Not many, but a few. First, there was the “Four Corners” producer who I spotted at the airport. Then there have been a couple of young backpacking types walking around with a discrete little Australian flag on their bag. Less discrete is the bloke in front of me wearing a “Holden Monaro” shirt. There’s also a couple of other Australians on board the flight, and I’ve noticed, as they’ve recognised each other’s accent, they’ve bonded with a friendly “g’day”.

In Australia, Stockholm looked a million miles away, but here, it seems like a hop skip and a jump away. Estonia, Latvia and even Russia look close. I’ve kept that three or four week period in the middle of my trip free for adventure. Who knows where I’ll end up. From this perspective, everything looks possible.

Flying with Lufthansa, I’ve really enjoyed the chance to revisit some of my high-school German. Although it’s only very, very basic, the flight attendants and the woman sitting next to me have indulged me, for which I’m grateful. I’m quite surprised at how much I can remember, let alone how much I can bluff my way through.

The phrase “Ich habe hunger” has certainly come to mind on this flight. After an early start on the food and wine (heaps of people got into the booze at breakfast) there was a lengthy hiatus between meals. My stomach rumbled loudly at one point. It was then I leaned over towards the woman sitting next to me and the phrase “Ich habe hunger” came flooding back from the memory banks.

Waiting for the food to arrive, I’ve been casting my eyes over the map. I really love watching the in-flight screen which shows you where you are. I also really love looking at the maps in the in-flight magazine.

In Australia, Stockholm looked a million miles away, but here, it seems like a hop skip and a jump away. Estonia, Latvia and even Russia look close. I’ve kept that three or four week period in the middle of my trip free for adventure. Who knows where I’ll end up. From this perspective, everything looks possible.

Anyway, we’re only about 45 minutes from landing and they’ve just shown us a short film about the operations of Munich Airport. There were so many variations offered of what do on arrival that I’m now totally confused. It was as if the script was written by Sir Humphrey Appleby.