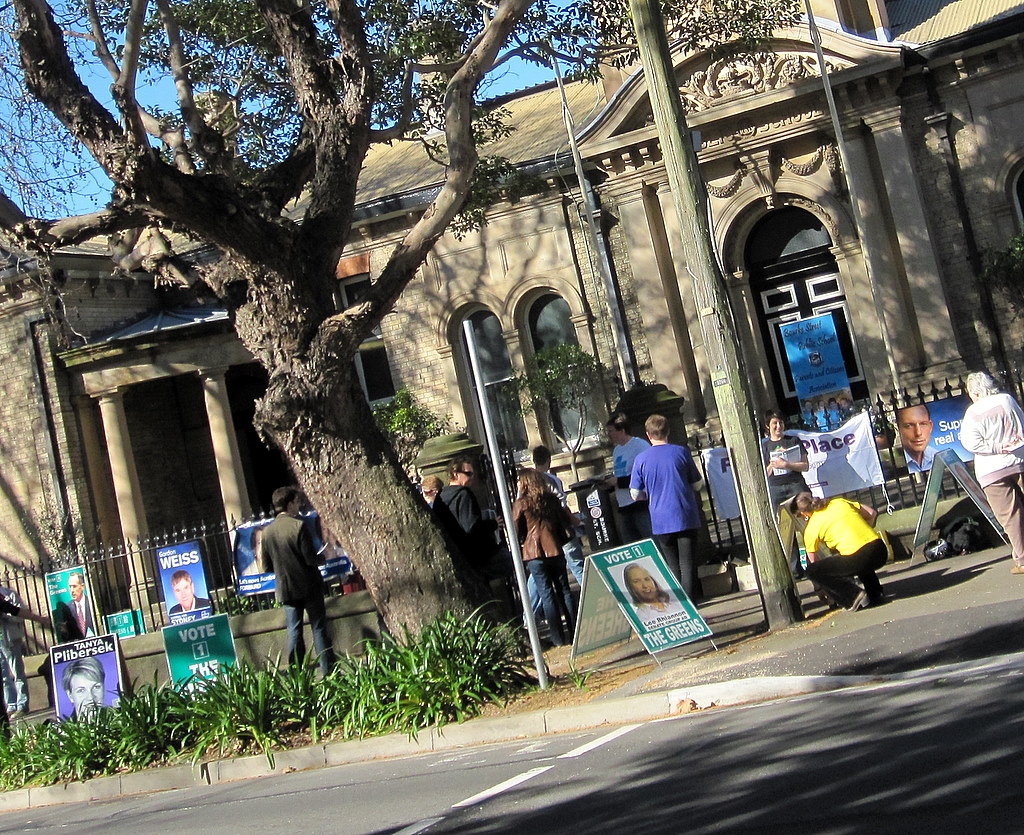 For just a few seconds every three years my mind go back to the early high school “rumble chamber”. That’s what it’s like when you go through the gates of Bourke Street Primary School on election day, as the party supporters surround you and offer you their “how to vote” cards.

Despite the total absence of any political material through the mail from anyone other than Tayna Plibersek, there were representatives from all of the candidates in my seat handing out cards.

I never take “how to vote” cards, as I always go into the booth knowing exactly what I want to do. I know they have a role for many people, but they’re just not for me. It’s interesting though, to see the different approaches some people take. While I take none of them, you see other people taking them all. And those who take just one are divided between those who hide them, and those who hold them high so you can see exactly how they intend to vote.

After I voted, I sat down on the nearby bench on Bourke Street to eat my bacon and egg roll (supporting the local school sausage sizzle). As I ate my roll, an older woman sat down next to me. She had been handing out “how to vote” cards since early this morning and told me she needed to rest her feet for a bit. While she had been there all day, some of the other parties had gone through shift changes, she told me.

She was a lovely woman who had obviously done this quite a bit before. “It’s a very calm booth here”, she said, noting that at some booths people can become quite angry. “I was talking to my husband about this and we concluded it’s the one day some people have to express their anger”, she said.

As we chatted I observed the interchange going on between those handing out “how to vote” cards, and there was a lovely calmness about it all. Perhaps it’s because the woman from the Sex Party was keeping everyone entertained with her comments, or maybe because it’s such a lovely environment with the shade offered by the trees? “We’re a happy bunch in the area”, I told her.

I also told her that it’s a good booth to vote at if you’re a local. When I voted, there were just a handful of locals, whereas the absentee voters queue was massive, and so I was in and out quite quickly. Further down the street, the length of the queue for bread at Bourke Street Bakery was somewhere in between.

I’m a bit of an election junkie. I’ve actually worked on my employer’s coverage of the last few state elections, and I normally spend Federal Election night in front of the television. I won’t be doing that this year. I’ll actually be in at work, so it will be an interesting new experience for me. In the meantime, it’s an afternoon of resting up.