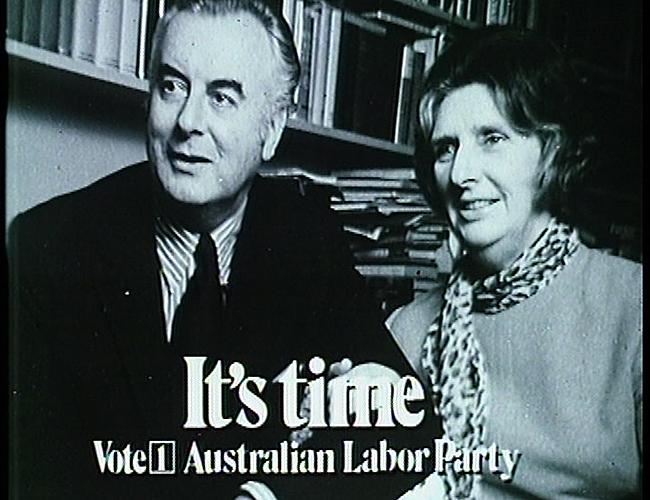 It’s been a busy day for me with both a lunch-time birthday at a pub at Manly, and then a dinner-party tonight in Surry Hills. The conversations covered a range of issues, including news of the death of Margaret Whitlam. At both functions there were both Labor and Liberal voters, and although we got into a slightly heated discussion about the role of Prime Minister’s wives (and husbands) at lunch, universally, there was sadness at the passing of Mrs Whitlam. As a public person, she always came across as someone with intelligence, wit and warmth.

I know this for a fact, because in December 2002, I had a chance encounter with Mrs Whitlam at the opening of an exhibition at the Museum Of Sydney. This is what I wrote on my blog at the time.

During the opening speeches, I was leaning against the wall, watching the proceedings when all of a sudden a face and voice appeared asking, “Do you mind if I borrow your wall”? It was Margaret Whitlam, the iconic wife of the former Australian Prime Minister. “If I don’t lean against a wall these days I fall over”, she said. When I replied, “Yes, I have the same problem”, she laughed.

So we stood there with Margaret Whitlam on the chair in front of me. She became my new best friend with her whitty remarks and wry observations about the ceremony underway. When a group of dancers came out with elaborate headgear, she commented, “Oh I wish they’d given us all those when we came in. Of course, you’d have difficulty keeping it on your head without sticking plaster”.

During the kava-drinking ceremony Mrs Whitlam observed that it “tastes like dirty dish-water” and thought it was hillarious when Mr Whitlam was given some to drink. “Dish water”, she said.

She was also amused to discover she had spent 30 years mispronouncing the name of a Tongan King and commented the dancers and singers, “Look more West Samoan than Tongan”.

After a while she and Mr Whitlam went to the book store, leaving her glass behind with a comment, “Can you look after that and make sure they fill it up by the time I get back”? I didn’t actually expect her to return, so I didn’t watch the glass, but when she did return she didn’t appear upset that I had neglected her wish. I asked her if she’d like some more and she replied, “Oh no, thankyou… I’m fine”.

At the end of the evening she walked over to Mr Whitlam with the comment, “I’m just off to see what His Highness wants”. Shortly afterwards they left.