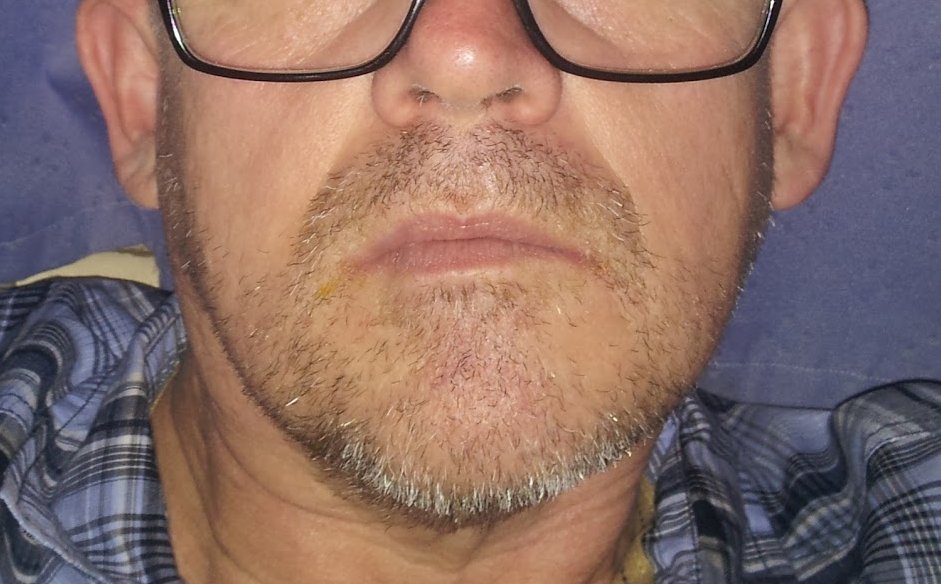 Are You Trying To Grow A Beard?

So far no one in my family has actually come out and said, “Are you trying to grow a beard?”. They’re too polite. Or maybe they just haven’t noticed?

Yes you do have to look quite hard at the photograph, don’t you? Even though I started shaving quite young, my beard is patchy at best, especially along the sides, and so have remained clean-shaven most of my life.

“Have you ever considered a goatie?”, a friend asked me on the phone tonight when I told her I was toying with the idea of a beard, though noting the lack of cheek-fuzz. “Oh no”, I told her. I’ve always thought sculptured facial hair would involve too much time in front of the mirror. Think George Michael and Craig David. On the other hand, I think those bush-ranger beards which are all the go at the moment suggest a decided lack of personal care.

And then there’s the issue of food-scraps. As you’ll notice from the accompanying photograph, I have enough trouble with vegemite, chocolate and other bits of food already getting caught in the corners of my mouth, without the added risk of a beard catching even more.

So even though beards have recently become fashionable once again, and even though I’ve had ample opportunity in my life to try one out, I’ve resisted the temptation for all of the reasons above.

In the last week, however, something’s happened and I’m re-assessing my opposition to beards, and am currently in the process of “trying one out”.

Like most things in life, it all happened without too much forethought. It all has to do with the fact I left my shaving cream and razor back in Sydney. It certainly wasn’t intentional on my part, but when I got to Lismore last Wednesday and realised what I’d done, I merely shrugged my shoulders and resigned myself to picking up replacements later in the week. I never did.

And so here it is, six days later, and I have the start of a beard. Yes, I know what you’re thinking – it looks messy, and nothing more than a three-day growth. But for me, it’s quite substantial, and there’s even a bit of fuzz on the sides. After two or three days of not shaving, I’m normally scratching, and can’t wait to return to my clean-shaven self. But at the moment I’m feeling okay, so I’ve decided to try it out a bit further.

“Three or four weeks is needed” according to the internet research I’ve done. That’s enough time for an individual to assess how they feel about facial hair, but also to see if the gaps between the hairy bits and the smooth bits begin to even out. The interwebz told me that if I let my beard grow for three or four weeks, and then trim it back, the difference between the lighter and heavier patches isn’t as great.

Although of course there are genetic issues that come into play – I’m light-skinned, fair-haired, lightly-haired Irish heritage mostly – you can apparently help the beard along by paying attention to your nutrition. Eating bananas works, apparently, (it’s the Zinc) as does a vitamin supplement called Biotin. There are also theories the hair replacement drug, Rogaine, might also work, though there have been no studies to prove this. But I’ll give the Biotin a go to see if it can help things along a little bit.

And yes, I’m aware of the greys. But hey, I’m 47 years old and have grey hair, so a couple of greys here and there in a beard isn’t enough to cause sleep loss. And besides… I’m a man. Men look distinguished with greys, don’t they? :) :) :)

Anyway, I’m thinking I’ll give myself until the middle or end of January to see how it all plays out. And then, after trimming, if it no longer looks like a moth-ridden carpet, I’ll keep it.