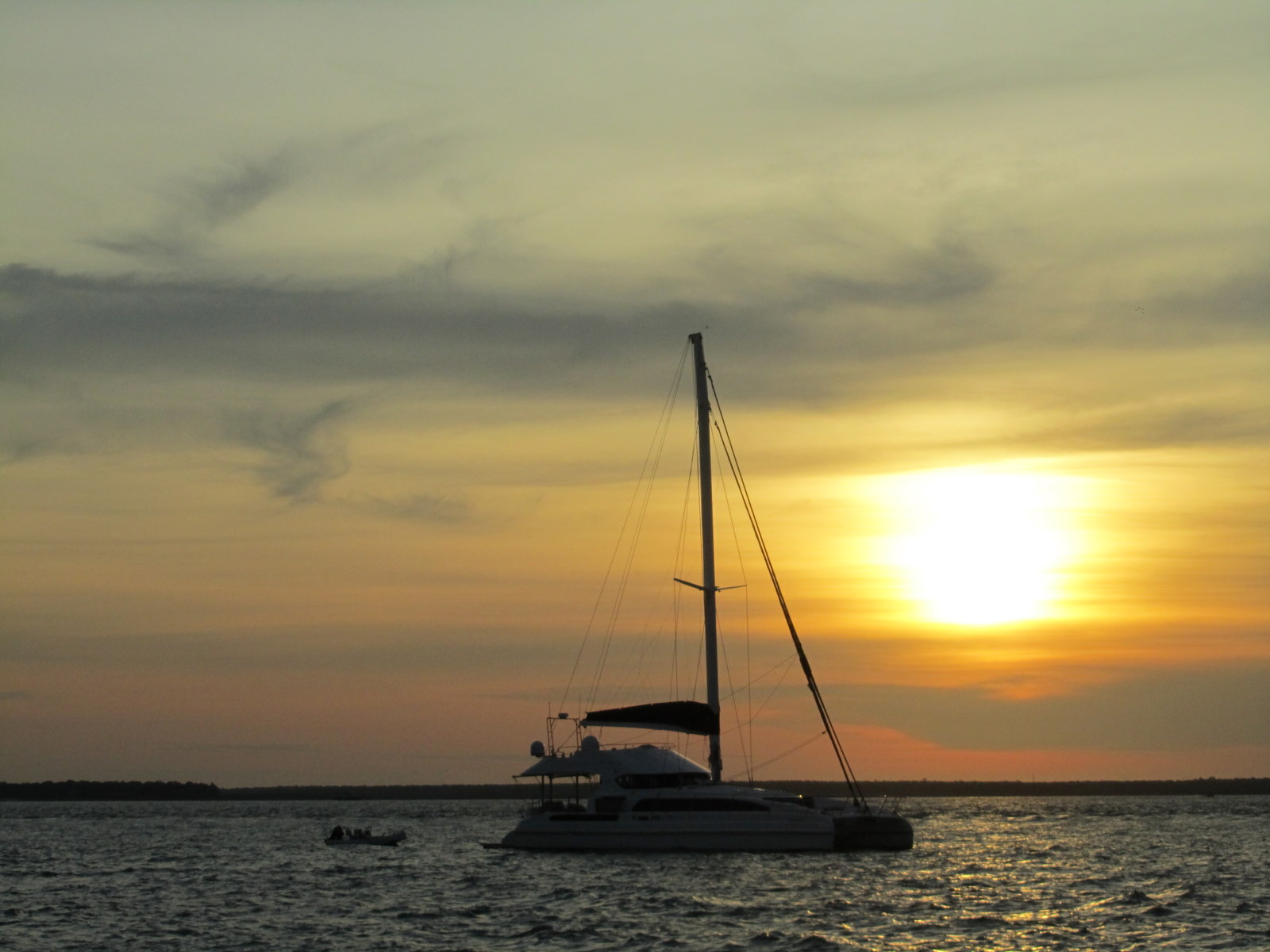 I have been to Darwin twice. The first time was with Damien in 1998 when we visited Declan and Penny and went on a four day tour of Kakadu and Litchfield National Parks. The second time was when I was working for the ABC in April, May and June 2002. The experiences of course were vastly different.

On both occasions, however, I was there for the dry season. Although aboriginal people in the area have identified up to eight seasons in the Top End (and the Top End refers only to one part of the Northern Territory, not the whole of the NT), most people usually just refer to the “wet season”, the “dry season” and the “build up”.

While the Dry season is near perfect, with temperatures above 30 every day and not a rain cloud in site, the Wet Season is probably more of an acquired taste. During the Wet season temperatures get a bit higher but, more importantly, the humidity rises sharply. Most locals say the “build up” is the worst. From October to the end of December the heat builds up along with the humidity. Storm clouds form, but very rarely is there any rain.

Throughout the dry season, community markets abound, including those at Nightcliff, Parap and Mindill. Mindill is probably the most famous with a huge variety of food stalls, hippy-style craftwork, and the sensational sunset which sees thousands of people communing with nature, as the sun sets into the ocean. They also feature terrific live music. On one occasion I watched Neil Murray perform live. On that night I also discovered why you shouldn’t sit underneath trees: termites are everywhere. Ouch!

Darwin has quite a few “tourist attractions”, the most unusual attraction possibly being Aquascene. Every day in Darwin, on high tide, literally hundreds of fish – milkfish, mullet, catfish, and rays – arrive at Doctor’s Gully at the Northern End of the City Centre. And for over forty years, members of the public have been hand-feeding them. As the tides in Darwin are quite large, high tide is the only time of the day when the water reaches a level where the public can easily come into close contact with the fish. During low tide, the water is 500m away from the coastline, so it’s only during high tide that it’s possible to see the fish up close and personal. Fishing is banned in the area, in an effort to maintain stocks, as prescribed in the Northern Territory’s Fisheries Management Plan. The fish-feeding enterprise, run by Aquascene, is a privately run business. While the property is still primarily a private residence, it is opened up to the public each day for the feeding. Opening times are totally dictated by tidal movements and change from day to day.

Darwin is set on a spectacular harbour. One of the highlights of my time there was a Sunset Harbour Cruise ($46, including Champagne and Nibblies). The decision to go on the tour was a sudden one: I was sitting in the Irish Pub, Shananigans earlier in the afternoon, wondering how I would spend my Saturday night and, browsing through the local tourist guide, happened upon a Sunset Cruise on an old Pearl Lugger. The sound of the vessell was far more romantic than the reality, but it was a great experience nonetheless.

As you might expect, given the cost and the orientation, this was not a backpacker cruise. Backpackers would have spent sunset in an Irish pub trying to pick up other backpackers, while travellers, such as myself, were more keen on the history of the area and the opportunity to see Darwin from off the coast. And that’s exactly what the cruise delivered… a wonderful sunset… a little of the history of the Port of Darwin, and the opportunity to see areas such as the Darwin Wharf and the Naval Base from a totally different perspective. I also made friends with a couple from Melbourne who had spent the last few years living in inland China, but were now back here and determined to visit as much of Australia as possible. I also learned a little about the history of pearling in the area around Darwin. Overall, excellent value and highly recommended.

Also located on the harbour is “The Wharf” which, during the Second World War, the wharf was a popular target for Japanese bombs, but which is now an entertainment district. At the end of the Darwin Wharf, near the old cargo shed there are a number of restaurants and cafes offering mostly seafood. Perhaps the greatest attraction though is the capacity to sit right on the edge of the wharf and watch the fish swimming near the surface as people drop food in the water. I’m sure most of the fish – principally Batfash and some Barramundi – will die of heart disease for all the chips and battered fish they are fed. It was a really fantastic way to spend the evening.

Darwin’s war-time history is also evident in the historic World War 2 Oil Storage Tunnels which are open for public viewing. They’re worth a visit for both their historic and artistic values. The tunnels were dug into the cliff to protect fuel from Japanese bombing, but there, apparently, never very effective. Even today, the tunnels leak from the vast underground water supply that is found underneath Darwin. Of the six tunnels, one isn ow open to the public. Despite the best intentions, by June 1942 after 19 Japanese air raids, only one sound tank remained, with 20,529 tons of oil lost from the destroyed tanks. Located inside the tunnels are about 100 wartime photographs which portray both a humorous and more serious side of the bombing sixty years ago of Darwin. Other photographs also portray, for example, the grave of an unidentified grave of Japanese solider, the actual bombing of Darwn, and the ration books.

As I am interested in history and remember Cyclone Tracey which devastated Darwin in 1974, I was also interested in going to the Museum & Art Gallery, where there are excellent displays of Aboriginal Art and about Cyclone Tracey. A particular highlight of the Cyclone Tracey exhibit is a dark you can enter where an audio tape, recorded by the local Catholic priest, is played. You actually get a sense of what it may have been like to have been sitting in a dark room as the wind howled outside. As you enter the room, however, there is a warning that people who remember Cyclone Tracey may find the whole thing very disturbing.

Perhaps the most over-rated thing about Darwin is the Fred’s Pass Rural Show. Located about 35-40mins south of Darwin, I was assured by locals the show was a real treat. And it probably was for some, but I thought it was a bit dull. No giant pumpkins – merely a small butternut as the only entry. The winner of the Craft Competition was a number of fishing lures. As for on-stage entertainment, a 14 year old girl kept the crowd enraptured with her dance routine to a Britney Spears number. I hope I’m not sounding too harsh…. but hey… I’m a Sydney boy now!

The local gay scene is also pretty dismal with two local bars. Throb is a fairly stock standard disco. More unusual however, is the the Railcar Bar & Mississippi Queen. The bar is in an old converted tram. It’s intimate and cosy and totally full on, especially as the owner is a little high maintenance. I met some nice people though. On one memorable occasion, I met some really amazing people including one guy who had spent a year or two cotton chipping at Bourke. Another guy, Malcolm, had spent the last four years at Byron Bay. We had a few laughs about the lifestyle of the North Coast and about how if you couldn’t get a job in Byron as a “waiter” you could always do “massage”. Malcolm told me Darwin people don’t quite understand the joke!

We also compared notes about the local paper, the NT News (he said he’s a newspaper junkie), and about buying the Sydney Morning Herald, which is airfreighted to Darwin and costs $7.10 on Saturday. On the negative side, the pool table is also the worst I’ve ever played on. When I put my money into the machine and only 10 balls came out, I asked the manager for some help, he said, in a Fawlty-esque manner, “Can’t you play with just those?”. When I mentioned the unbalanced table to him, he said it must be a new thing. I challenged him and said, “It was like this three years ago”… he didn’t reply. Most Darwin people however have a nice sense of humour. How else would you explain all of the personalised number plates?