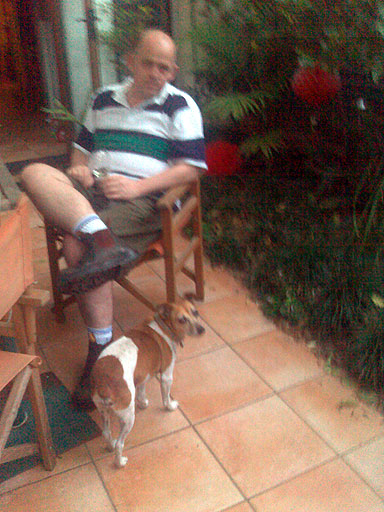 It’s Sunday evening and I’ve just woken up from a late afternoon nap, at the end of several busy days. It comes at the end of a few days in Newcastle (work-related) which was both enjoyable and hard-working. I enjoyed, though, catching up with some of the many people I only ever talk to on the telephone and meeting some new people. Oh yeah, and the team from Sydney were very excited, being recognised for our hard work over the last couple of years.

On arrival back in Sydney on Friday night, I went to bed soon after and slept well ahead of a busy day of socialising yesterday.

Because yesterday involved drinks and lunch (almost turning into dinner at The Royal Exhibition Hotel, near Central Station). The usual crowd of ABBAMAILers gatherted to celebrate Donna’s birthday at a venue we’ve all been going to for several years.

The beer garden venue out the back has changed significantly since the last time we celebrated a birthday there. Re-designed with Raffles, Singapore in mind, the concrete has been replaced with tiles and the plastic chairs with cane furniture. Half way through the afternoon I scouted out the upstairs room as a possible venue for my own birthday celebration this year. Having not really celebrated my birthday properly in a few years, I’ve decided I would like something more formal this year.

On reflection it’s amazing that we’ve all met each other in the way we have. The core group of regular ABBAMAIL function attenders in Sydney includes people from diverse range of professions and backgrounds, and yet we all get on famously, and care about each other, and yet we hardly ever talk about ABBA. Well we do, but not incessantly.

So here it is, Sunday night and, although I’m feeling refreshed after the nap, I’m still a little tired. For me, Sunday night will be an evening of television watching. Out of curiosity, I’ll be watching the new Channel 9 reality series where they’ve placed suburban families in a “Survivor-like” situation. That said, the opener in which is already beginning to look incredibly dodgy. Out of curiosity, I’ll also be watching “The Logies” since I actually know three people this year who will be attending and one who will be presenting.

The early part of the week is quiet, and then on Thursday night I’m off to a cabaret show, on Friday night, it’s the opening night of “Trying” at Ensemble, and then on Sunday I’m hosting my usual “Eurovision Party”. Life goes on…