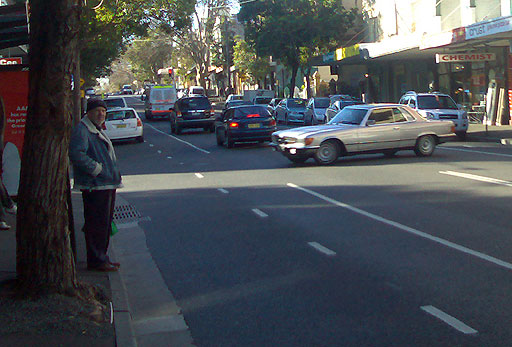 It’s funny being around Surry Hills in the daytime. As I work M-F 9-5 (or thereabouts), I don’t normally get to see what’s happening in my neighbourhood on a weekday.

Looking out my window now, for example, there’s a couple of very flash looking women sitting in a very flash car. They got out for a moment, walked down the street, and then came back. Maybe they’re associates of the international media mogul’s son who bought a warehouse in my street last year? Maybe not. Oh hang on, they’re driving off.

The other odd thing that happened yesterday, walking down the street, was that I was approached for a bit of a chat by one of the “odd characters” of Surry Hills. You know the ones I mean. They’re the ones who cross Cleveland Street AGAINST the traffic. They hang around the supermarket all day. I’ve seen her around for a few years now, and she obviously recognised me when she stopped me for a chat yesterday on Crown Street. “Oh it’s cold”, she said, before opening her jacket to reveal the layers of clothing she had on. “Still it’s worse, we could be in Newcastle”. At which point I told her about my friend Kate, and she told me about her ex-husband and how they both had faired in the weekend’s storms.

Having just had a coffee at Bills, I was on my way to the Art Gallery of NSW to see one of their current exhibtions, “An incomplete world: Works from The UBS Art Collection”. It’s a very mixed collection, though it offers a fairly comprehensive view of the last forty years of contemporary art.

Mostly, I really enjoyed the collection, though I was a little disappointed with the works on display of a couple of my favourite artists, Andy Warhol and Roy Lichtenstein. The Warhol portraits are of Joseph Beuys and James Cagney, though I wasn’t particularly moved by either of them. I also thought the piece by Lichtenstein of a lounge-room with the words “post visual” writ large was interesting, though it didn’t really appeal to me.

However, I loved the two portraits by Lucien Freud. There’s a close-up portrait of woman called, I think “Head of a naked girl”, and a portrait of his daughter with a dog. What I like most about the works is that the figures are androgynous, and their faces are worn, giving incredible depth to the character of them both.

I was also impressed by the work of Yasumasa Morimura, a Japanese photographic artist who places images of himself in recognisable Western art to convey the idea, I understand, that Western art is often narrow in its representation of the world. Once photographed, the images are then covered in a thatched varnish which gives the impression they’re actually paintings.

Cindy Sherman is another artist who features herself in her photographs. I also thought her works were good.

The one Australian contribution to the collection is the work of Maria Kontis. Her intricate drawings of snapshot photographs are really beautiful.

My overall favourite though, would have to be the giant photograph by Andreas Gursky of the inside of a discount store where everything sold costs 99 cents. Along with the sheer size of the work, what it also gives it a sense of majesty is that it’s also beautifully composed. I could have sat for an hour, I’m sure, just looking at this work.

It’s a good exhibition and one I’d highly recommend.

Going to galleries, seeing plays, doing lunch, and visiting Pat in Canberra are high on my list of “must do’s” for this brief holiday, which I need as a “refresh” more than anything. So far, I’ve only received one work-related phone call, which is wonderful. I think everyone at work realises the next few months are going to fairly busy for me, and so they’ve realised they can work it out themselves.

It’s also great just to chill out watching a few DVDs and some television. Actually, I’ve already found myself watching far too much daytime television, if you consider an hour’s worth of Trisha Goddard to be far too much. Today’s program was an hour-long discussion about female body image which seemed to be nothing more than an exercise in watching overweight people taking off their clothes.

As the program came to an end, they also featured an Australian couple with an interest in muscle worship. “I just want to say I’m an Australian and not all Australians do this”, declared Trisha. “What, Australian?”, I thought. As Australian as Germaine Greer, Barry Humphries or Clive James, I suppose.