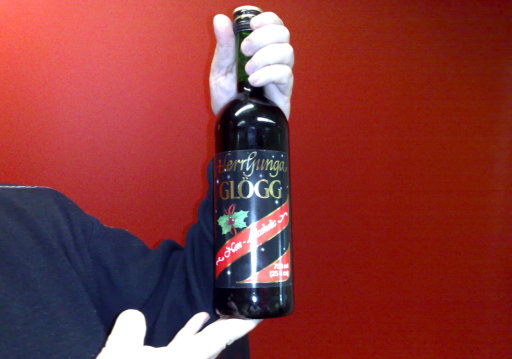 I caught the ferry to Manly to go to Nordic Fusion, a Scandinavian design store, that also stocks a range of Swedish food and drink – Svensk mat och dryck – including, Glögg. I remember having tasted mulled wine many years ago at a dinner party at Wentworth, near Mildura on the NSW/Victorian border. I think I was about 25 or 26 and it was all very exotic for a young man who had spent most of his life living in rural and regional Australia.

Many years later, it was with some trepeditation that I approached the store to purchase three bottles of the stuff to take along to my Swedish class tonight. I’d called Nordic Fusion a day earlier and told them what I wanted and why. As I entered the store, there were a couple of other customers looking at hand-bags, sound systems and other such things. My bottles of Glögg were tagged in the fridge out the back. In an absolute bargain, they gave me an extra bottle for free. And then one of the women began to speak with me in Swedish.

“Oh my goodness”, I thought to myself. This is the real thing, speaking Swedish to a real Swede. I stammed out a few words, explaining that I only spoke a little Swedish, and that I was planning to travel there later in the year. Shyly, I left the store, totally appreciative of the way they had treated me so kindly, especially counting out the change in Swedish etc. That said, I really have to gain some confidence in speaking with real life Swedes, rather than just my classmates.

We had a great time at tonight’s class which, focussing on food, involved everyone bringing along some kind of food item. The cakes and sweets were, as our teacher said, the best in the world. I also really loved the pickled herring and meatballs. And the Glögg? Well, I thought it was okay. Everyone seemed to enjoy it, warmed and with raisons and almonds, though it was perhaps a little sickly sweet for me. I still have a bottle left at home, by the way, for those cold winter nights which are almost upon us.