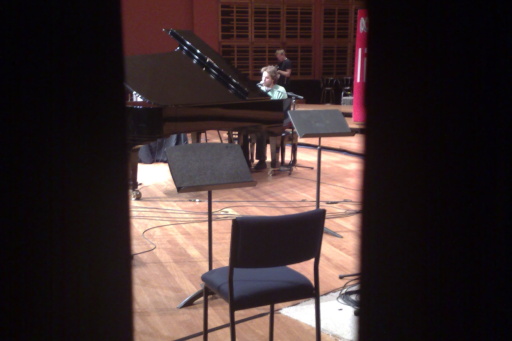 I know if I don’t post now I never will. Or at least if I don’t post until the weekend I’ll be so far behind it will be a pain in the arse to try to catch up. The reason is simple: work is bloody busy at the moment. This week we have five major events underway: Art After Hours at the Art Gallery of NSW, the Sydney Film Festival Launch, a major fundraiser at the Conservatorium of Music, the launch of the Bald Archy Prize and a broadcast from Sydney Observatory. Oh yeaH, and that’s on top of all the usual stuff. It’s exhilirating to say the least.

Although I’ve been to Art After Hours previously, I never made it last night. Instead, Damo and I went to the Sydney Film Festival Launch, which was loads of fun. The featured film was “Happy Go Lucky” by Mike Leigh. In common with some of his other films including “Secrets and Lies” the lead character is both charming and annoying. She’s an eternally optimistic character (which is great), but she also never seems to take anything seriously which leads to some conflicts. I personally loved the film, though others I spoke to last night loathed it. “It never went anywhere. There were too many unanswered questions. Too many plotlines that meant nothing”, was the comment of a someone I run into every year at the Sydney Film Festival. It was lovely to see Fred, who I knew from my days working in Wagga Wagga, and I was rather chuffed when he told me he often thought about me. “More than you might expect”, he said.

The party afterwards was also good fun. The theme this year was “glamour”. We were both quite impressed with the band which played, though I don’t recall their name. Their style of groovy kinda funk, though, was very appealing.

I made it home just after midnight and fell asleep instantly. It’s close to midnight now and I really should be in bed, but I’m still quite pumped after tonight’s fundraiser for Medicins sans Frontieres at the Convervatorium. As I understand it, the benefit has probably raised about $65,000 which will hopefully help some of the brilliant work they do.

We had a stellar lineup of performers, comedians, musicians and our own personalities. All of the musos were excellent, especially James Morrison and Emma Pask and I think Wil Anderson was bloody funny indeed (even if he was wearing thongs!). And Carl Riseley is simply the nicest guy ever (younger in real life than he looked on the tv). Just when you think your job is sometimes not all that you’d like it to be, something like this happens which just makes you feel great.

Whenever I’m involved in organising an event like this, though, I think of the great moment from Absolutely Fabulous when Saffie is chastising Edina over the angst she feels in organising a fashion parade. “They mobilised half a million troops in the Gulf in less time than it’s taken you to organise this fashion parade”, Saffie says. To which Edina responds “Yes, but every soldier didn’t need flowers and a hug”.