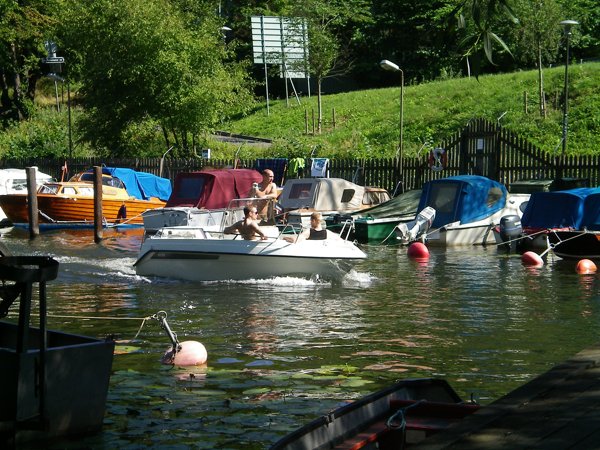 Summer has well and truly arrived in Stockholm. I don’t exactly know what the temperature was today (maybe late twentes), but today’s paper “warned” there were a further eight warm days ahead. Oh the joy! And I can tell you, it was definitely warm enough for a large number of people to find themselves somewhere in a park near the water, and to take off their clothes.

My friend Yvette warned me about the Swedish custom of colleagues stripping off to their underwear in parks at the vaguest hint of sunshine. We would never do it in Australia of course, but here in Sweden sunshine is a rare enough commodity that you don’t worry too much about your own personal modesty. Oh, and guys do the “undress with a towel around you” thing that’s common on Australian beaches.

In fact, it was so hot today that I actually came back to the hostel around lunchtime for a while, chatting online for a bit with Patrick and Damien.

I also needed to come back to pick up my laundry. And that’s when I had my second rude shock for the day (after the weather). What I thought was 70kr for the wash (about $12) turned out to be 70kr per kilogram. As I had almost 3kg of washing to be done, you can imagine the shocked look on my face when the bloke told me how expensive it was.

I had a typically Swedish lunch today, by the way. My second typically Swedish meal in as many days, with the previous being a salmon dish with dill potatoes. Today it was a dish from the famous Herring Van at Slussen. It was a herring dish with mashed potato, vegetables, and hard bread. Very tasty and very good value.

And then after lunch I wandered around Langholmen for a few hours just enjoying the sunshine. The island is absolutely beautiful, and although there were some very busy parts of the island, there were also vast areas where you could walk around without seeing anyone. Oh, and Graeme, yes you were right about Langholmen :)

After an hour or so sitting in the sun, the lure of the water became too great. And while it may have been an extremely hot day, it wasn’t matched by the temperature of the water, let me tell you. I wasn’t alone, though, as few very of the locals were venturing into the water either.

I have no plans for the night, though it would be a shame to stay here at the hostel. My guess is, that with the warm weather, people from Stockholm will be out and about tonight. So I guess I should get me a piece of the action.

I’ve moving to another hostel tomorrow which is a pain in the arse. But it’s not so bad I guess, as a young Australian bloke has just arrived to dominate conversation at the hostel. Wearing an Australian flag t-shirt, he has spent the about ten minutes now telling everyone what’s wrong with everywhere he’s been. “Too expensive and you don’t know where to go” is the theme of his complaint.

On the other hand, I’m loving my holiday.