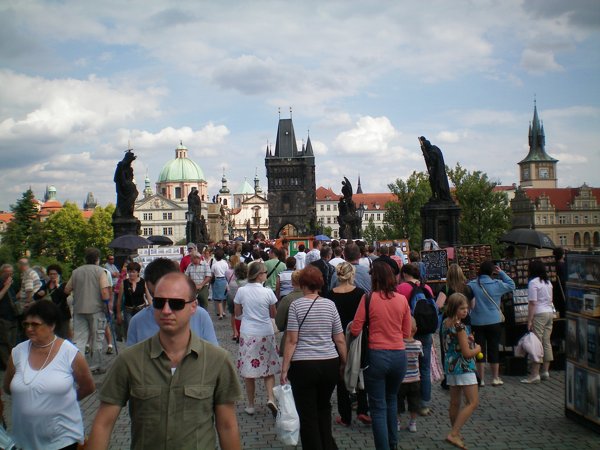 Fly On The Wall in Prague

I haven’t written much about food on this trip. At the risk of sounding parochial, it’s mostly because most of what I’ve eaten so far has been pretty bloody awful. Put simply, it hasn’t been anywhere near the quality for anywhere near the price of what I can get at home.

Food-wise, I don’t expect much from the Netherlands, Germany, or the UK, and so I’m pinning all of my good food hopes on France. David, are you reading this?

But today, at a fairly ordinary pub here in Prague, I had a fairly decent meal at a fairly decent price. Put simply, it’s pork with a kinda gravy sauce with dumplings. Accompanying the dish was some sour cream and cranberries. A bit like the Swedish meatball sensation of mixing the sweetness of cranberries with the savoury flavour, they were excellent.

Also today, I spent some time exploring Jewish Prague. There’s a long history of Jewish inhabitancy in Prague, and for a long time they were confined to just one small part of the town. The other remarkable thing you can see inside one of the synaogues is a “war memorial-like” roll of names of people from Prague who died in the holocaust. Thousands and thousands of names. It’s very moving.

The only other thing I’ve done today, aside from a bit of sightseeing, is go for a swim. And that’s where I got an insight into the real Prague. It was strictly as a “no tourist zone” as I negotiated my way for a swim late this afternoon through a group of old women on the counter who spoke absolutely no English at all. As you enter, the baths are divided between male and female, with males directed to the left. Inside, it was all a bit “nude” for a moment (frighteningly so by Australian standards), as I made my way through the change room to the pool. But ah… what a relaxing place. Down by the river. Very nice, and just the way to finish up a fine day.

“Come on and get your fucking shit together”, said the Australian girl just a moment ago, trying to convince the Swedes to come with them on the three-hour organised pub crawl they’ve booked themselves on. Yeah, you guessed it, the Aussies are already pissed BEFORE the pub crawl. Amusingly, the Swedes are telling the Australians a complete load of bullshit about Sweden. Finally, I know… “this is what it’s like to be a fly on the wall…”

PS – Going bush for a couple of days so blog might not be updated until I get to Amsterdam. Will see how I go.