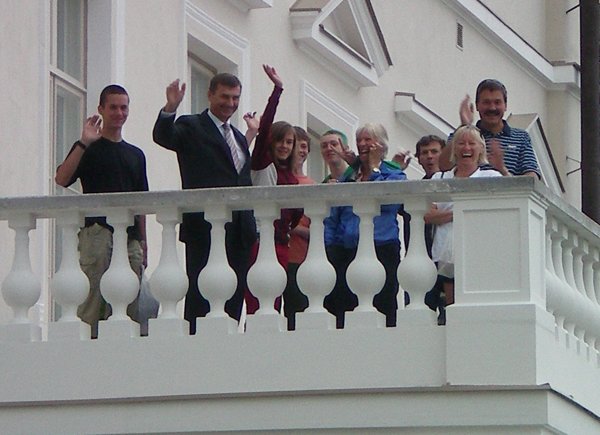 Getting To Know Tallinn

After a late start to the day, I set out to explore some of Tallinn. As I mentioned yesterday, I’ve been feeling a little bit sick. I’m not sure if it’s the day spent in the rain in Stockholm, or being around too many other backpackers, but I’ve been feeling a little congested. Staying in some nice accommodation I decided to make the most of it and stayed at the hotel most of the morning.

Breakfast was nice enough. I especially liked the rollmops. There was also a curried fish dish which was tasty. As with most of these breakfasts, I ate all that I possibly could to make the absolute most of it all.

After breakfast I returned to my room to rest up for a while. The only thing that really made me leave the hotel was an unexpected power outage. “We have a problem with the power”, the woman at reception told me, on my way out of the building. “Not a problem” I replied.

“50% of all tourists come from Finland”, my tour guide told me on the Official Tour of Tallinn you get with the Tallinn Card. In our case, however, Fins made up 67.3% of those on the bus tour. You guessed it: there was just me and two Finnish girls. As there was only three people it was a very personal tour by the guide who was excellent.

The first part of the tour takes you on a bus around much of Tallinn, an overview more than anything. We were shown the Russian area, remnants of the involvement of Tallinn in the Moscow Olympics and visited the grounds of the Song Festival, an Estonian tradition that dates back several hundred years. The parklands there we also very important to the independence movement that came with the fall of the Soviet Union.

And then we returned for a walking tour around the Old Town.

I guess for me, with an interest in politics, the most interesting parts were hearing a little about the independence of Estonia. Time and time again the tour guide returned to the theme of Estonian independance, noting the country has only had 39 years of self-rule in 800 years. Time and time again she would refer to buildings as being from “The Danish Period” or “The German Period”. The word Tallinn itself means “Danish Town”.

But now they’re independent and you can really sense the pride our guide felt in that independance. “I’ve never seen him before”, she told us, when the President of Estonia appeared on the balcony near where we standing. He smiled for the camera of course.

It was an excellent tour. We had a terrific guide who was very knowledgeable, and who spoke English and Finnish very well. A bus trip. A walk. Two and a half hours in total. And we were lucky, I guess, that ours was such a small tour. And since it was included in the price of the Tallinn Card ($45 Australian), I already feel the card has paid for itself many times over.

I don’t know what the night holds. Although I’m feeling a fair bit better than I was, I still feel a little congested. I think I’ll check out the guide book to see what might be on offer on a Thursday night in Tallinn.