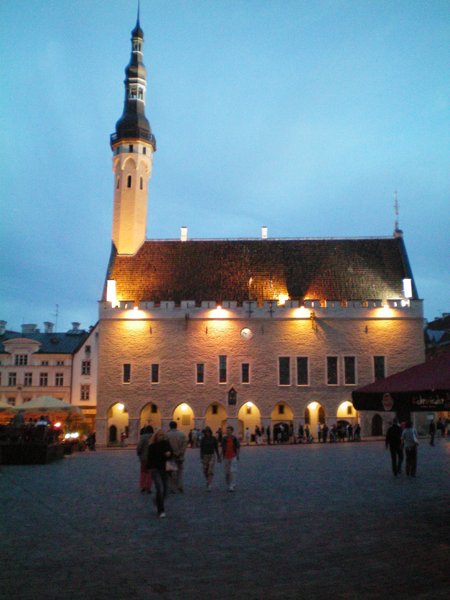 It was just after midnight last night when I entered Tallinn’s grooviest nightclub, Angel for the third time. But as I entered the bar last night something was quite different. In stark contrast to the two previous times I’ve been there, the place last night was actually empty.

“There’s no one here yet. The place starts late?”, I said to the bloke behind the bar. With a nod of his head he confirmed as much. For a while it was just me, him, and another bloke who arrived at about the same time. It was probably one o’clock before anyone else turned up. Ordinarily I’d be thinking going home at that time in the morning, but I’m on holiday so I figured “why not have a late night on the town”?

I’d been out earlier in the night for a quick bit to eat. The restaurant was a dark and dingy cave-like affair that I happened upon. I don’t recall the name of the place, though it’s probably not the kind of place I’d recommend anyway. It was the kind of place you might walk past, look briefly at, and then keep walking, as you imagine there might be somewhere better further along. But a voice inside my head told me to go back.

The tuna salad they served was okay, as was the wine. The atmosphere was good though, with lots of 20 and 30-somethings enjoying good conversation, and cheap food ahead of a late night on the town in Tallinn.

There was only one conversation I could listen into though. A couple of young Australian blokes were sitting next to me. Their conversation was pretty innane, actually, as they discussed the pros and cons of living with parents. It was like they were describing a share house situation, more than anything, with the central theme being the kind of arguments you can have about the usual share-house dilemmas cooking and cleaning.

From there I wandered back to my hotel, dropped off my camera, and then made a return to the nightclub area of Tallinn’s Old Town. I had a couple of beers at the rather confrontingly named X Baar. Last night all the staff were female, and I suspect it might have been a lesbian-inclined evening. Still, men were very welcome.

Behind the bar there was an older woman who might have been the owner. There was something a bit “Dawn O’Donnell” about her as she surveyed the room. Amusingly there was another woman behind the bar who bore a remarkable resemblance to Gretel Killeen. I must have been staring a little too much, as she gave me a “why are you staring at me” look at one point.

And just when I thought I was gonna go home, that little voice inside my head told me to walk next door to Angel. Even though it was my third time this trip, I thought “why not”? And I’m really pleased I did, as I met a nice bloke there and had my first “real” conversation with a “local”.

Later he told me he was born in a small town near the Estonian/Latvian border. He’s also lived in both the United States and Spain, and would like to live in Australia. “I’m too old to get a working visa”, he told me. I gave him the good news the entry requirements have changed somewhat in the last twelve months. “Tallinn is too small”, he added.

Today was my last day in Tallinn, as I’m heading off to Riga tomorrow morning. In some ways I haven’t explored as much of the city as I probably should have. Today, for example, I didn’t do very much at all.

After sleeping in, I went for a wander around town. I went without my map this time, and unfortunately I got terribly lost again. Once again, I was forced to catch a cab home. But that’s not a problem as they’re reasonably cheap.

I’ve discovered the problem is the city isn’t well sign-posted. There’s one point right in the middle of town, at a major intersection, where you can’t actually see any road signs at all. I was reassured it wasn’t just me when I saw a young backpacker late this afternoon with a look of absolute confusion on his face, as he too, tried to make sense of the town’s geography. If I’d felt a little more confident in my skills to get around I suspect I’d have explored more.

And tonight I’m back in my room, resting up and channel hopping. Oddly enough, there’s an Australian sketch comedy show on television. They run “Home & Away” here too.

But unlike Sweden where they just sub-title English language programs, and Germany where they dub, in Estonia, they have a variation I’ve never seen before. The programs are in English with as Estonian over-dub. So you can hear the English in the background, but over the top there’s a single bloke who reads the script in translation. He doesn’t act, he just reads the script. On another channel there’s an American program which is overdubbed into Russian (you can still hear the English) and with Estonian sub-titles.

I’ve been trying to avoid BBC World, as the current war between Russia and Georgia is dominating the news. It’s odd, isn’t it. Although Georgia is thousands of kilometres away, it still seems very close. And then, of course, you’re reminded Estonia was a former Soviet country just twenty years ago. There have been occasions while I’ve been here where I’ve had to stop and think for a moment what the people here have had to live through, with both German and Russian occupation in the last century. Amazing stuff.

After four weeks on the road with some pretty intense experiences, it’s been great just to rest up for a while in some nice accommodation. I’ve managed to beat the bug that I picked up, and the blister on my foot has gone for the moment.

And I feel pretty good about the world, ready for my next big adventure.