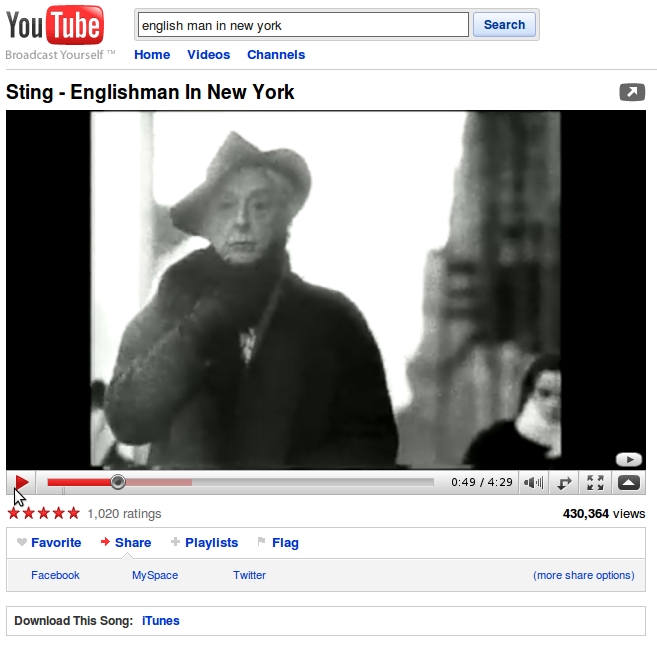 Grant, Graeme and I went to The Ritz at Randwick tonight to see “An Englishman In New York”, as part of Mardi Gras Film Festival.

It took about as long as a flight to get to New York to get there, as the George Michael concert was about to commence in Moore Park.cWho would have thought George Michael would be playing in a park? :)

I was very interested in seeing this film as the precursor, “The Naked Civil Servant” was such an important film for me. I’d seen both the film, and had read the book while in high school. With John Hurt playing Quentin Crisp, an out loud proud gay man when it wasn’t fashionable to be so, it was a film which has resonated with me for much of my life. I still vividly remember watching it on ABC-TV as a teenager.

This film jumps 20 years or so, and Quentin Crisp is now living in New York. And he loves the place. But it’s not without controversy, as he famously described AIDS as a “fad”, and he’s criticised by the gay community for “playing to middle class straights”.

As we discussed the film afterwards, we concluded he probably regretted these remarks, but had painted himself into such a corner that he was unable to retract (or so it seemed). It was GREAT seeing John Hurt playing the same character many years later. It was also fascinating to watch the ageing process. In the midst of so much gay culture which is youth-associated/obsessed (?), it was very interesting to watch from that perspective. As my friend Graeme described the situation, “it was great having some closure on his life”.

And of course, I love the song…

“Be yourself, no matter what they say…”