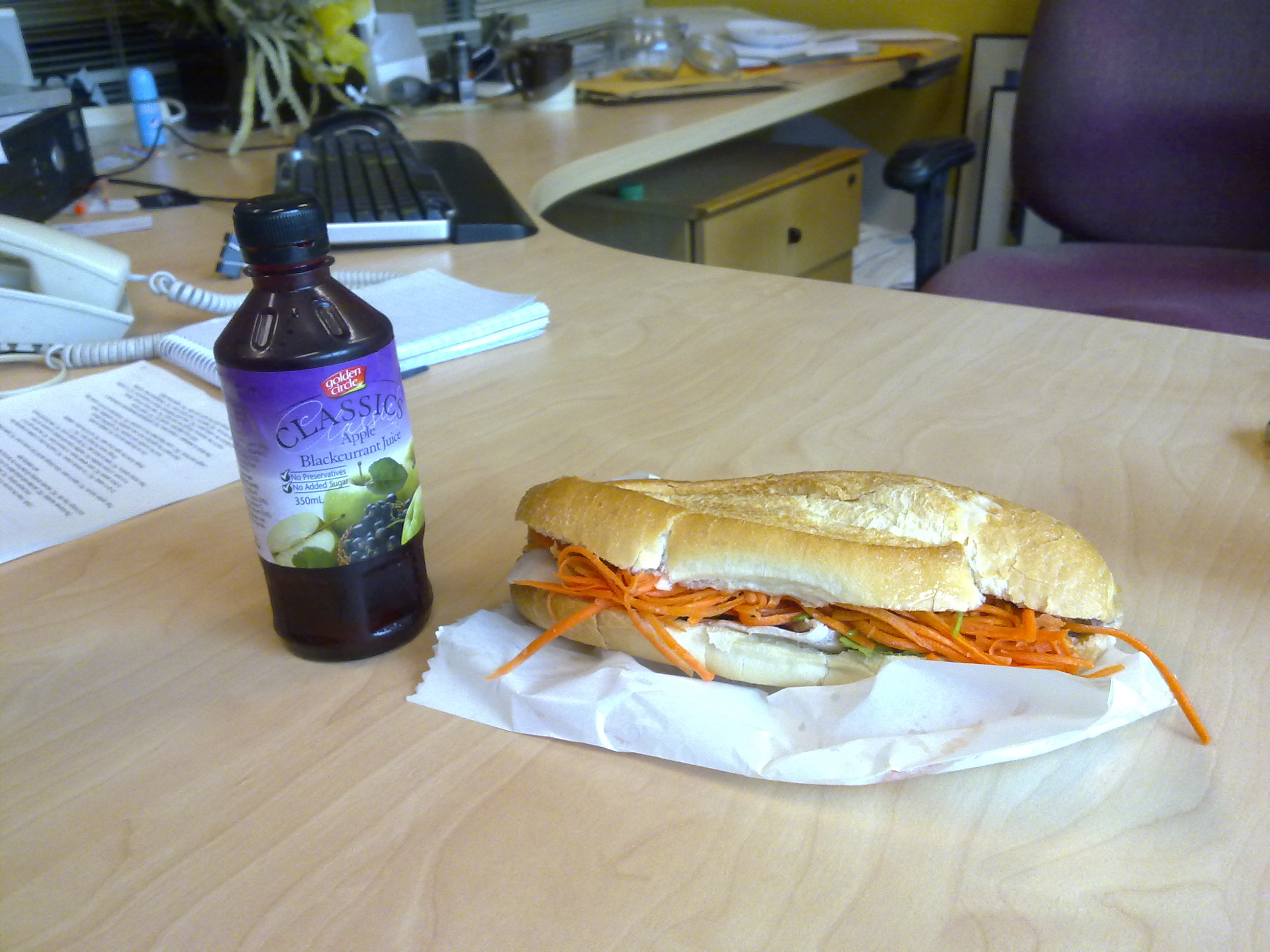 It’s funny how we become creatures of habit, isn’t it? There’s a bloke I work with who has a bread roll with vegemite for lunch every single day. There’s another bloke I work with who eats the same canned tuna and cottage cheese sandwich on multi-grain bread every day. It’s disgusting and stinks out the kitchen, by the way.

I have my habits too, of course. A few weeks ago I wrote about my addiction to flat whites from Coffee Trails and to the “unseeded ham sandwiches” from the German Bakery, both at Railway Square in Sydney.

Today I’ve decided to admit to another addiction: pork rolls from “Bread Rolls on Harris”. It’s a small, unassuming shop next to the former Gloria Jeans and only a stone’s throw away from my workplace. And they make the BEST VALUE, TASTIEST pork rolls I’ve ever had.

It was a bit of a secret at my workplace for a while. Lots of people were going there but weren’t letting the secret out of the bag.

In exasperation at my complaints about the cost of sandwiches from another nearby shop – eight or nine dollars for a sandwich is ridiculous – a colleague who was “in the know” relented and let me in on the secret of what I call “the pork roll shop”.

In excellent business practice they only have a few things on the menu, but they do them very, very well: chicken rolls, salad rolls, pork rolls, and ham sandwiches. As for price? They range in price from $3-4 depending on your order. For me, this means I can get a pork roll and and a soft drink (or fruit juice) for only $5 to $5.50.

The shop started a few months ago with just one woman behind the counter. It sometimes felt like an eternity as you stood and watched her make the rolls in the same methodical manner. She’s since been joined by another woman, and so the service has become much faster.

They always have a smile for you, and you even get the impression that with each roll they make, they add a “bit of love” into the equation. Seriously, it’s a lovely experience going there.

I’ve also become quite an evangelist for the shop. The other day as I was leaving work I ran into a colleague and asked her what she was doing for lunch. “Come with me”, I said, “and I’ll show you the pork roll shop”. Later she sent me an email extolling the virtues of the pork roll, though noting “chili sure packed a punch”.

She’s right on that. I discovered this early in the piece, and always make a point of saying “no chili please”.