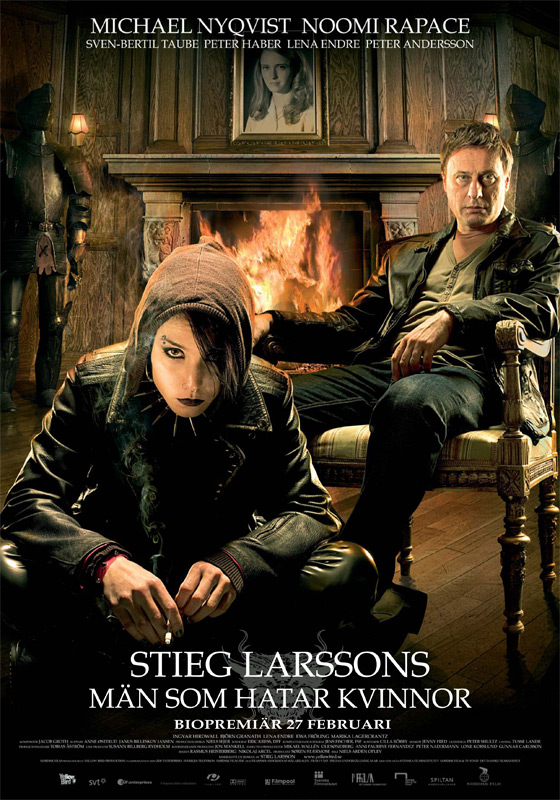 “Det blir svårt”. “It becomes difficult” in Swedish is how I’d sum up my day.

On the way home from work, I was armed with a copy of “Män som hatar kvinnor” – “Men who hate women” – the original Swedish language hardback of the first book in Stieg Larsson’s Millenium Series. The English language title, “The Girl with the Dragon Tattoo” is obviously far less controversial.

Although I’ve seen two of the movies, and have seen the exhibition at the Stockholm City Museum, I haven’t read the books many Australians have. It’s been a best seller here in Australia. Not as big as “The Best of ABBA” or “Så som i himmelen” (As It Is In Heaven”), but still quite popular.

The exhibition about Stieg Larsson at the Stadsmuseet in Stockholm was really good, and the film was interesting, though tough going without subtitles.

But today as I arrived at work, I noted a lovely “gift” in my pigeon-hole: a colleague, who is a native Swedish-speaker left me copies of the entire original hardback in Swedish. What a kind and lovely gift.

As a native Swedish-speaker, I have no doubt she would have read them in a weekend, but for me, it’s going to take a lot longer. A LOT LONGER. My ability to read and speak Swedish remains at the level of a five-year old. This will be a REAL challenge, but one I’m willing to take. I figure if I can read and translate one chapter each week, that will be a realistic challenge to undertake.

So there I was, armed with my Swedish hardback on the bus coming home from work. Also on the bus I also ran into a colleague who was off to a short film screening tonight at the cinema at Randwick, which featured a film made by a friend of hers.

“How was your day?”, she asked. Briefly I was reminded of Julia Gillard’s answer on last week’s Q&A about Mark Latham, and how much of a tool he was, to which she answered… “There are some things that can’t be measured”. Instead, I told her, that was “A question for which there was no answer.” It was one of those days that everyone has where you wonder why you do what you do. The lovely gift from my colleague of the Stieg Larsson books more than compensated, I think.

“Just think of your trip to China” was the consoling comment from a colleague today when I expressed my frustration at a few things today.

And as for tonight? How did I relax? Well, I’ve watched a lot of television. There was much to see including Julia Gillard on 7.30 Report, Australian Story, the election special on Four Corners, Mark Scott on Media Watch, Tony Abbott on Q&A, and the finally, Tony Windsor and Bob Katter on Latline. If you have an interest in politics, there was more than enough to watch tonight, I reckon.

I actually nodded off for a while during 7.30 Report, Australian Story and Four Corners, but woke again for Media Watch. That’s what happens when you reach a “particular age”. It all becomes too difficult. “Det blir svårt”.