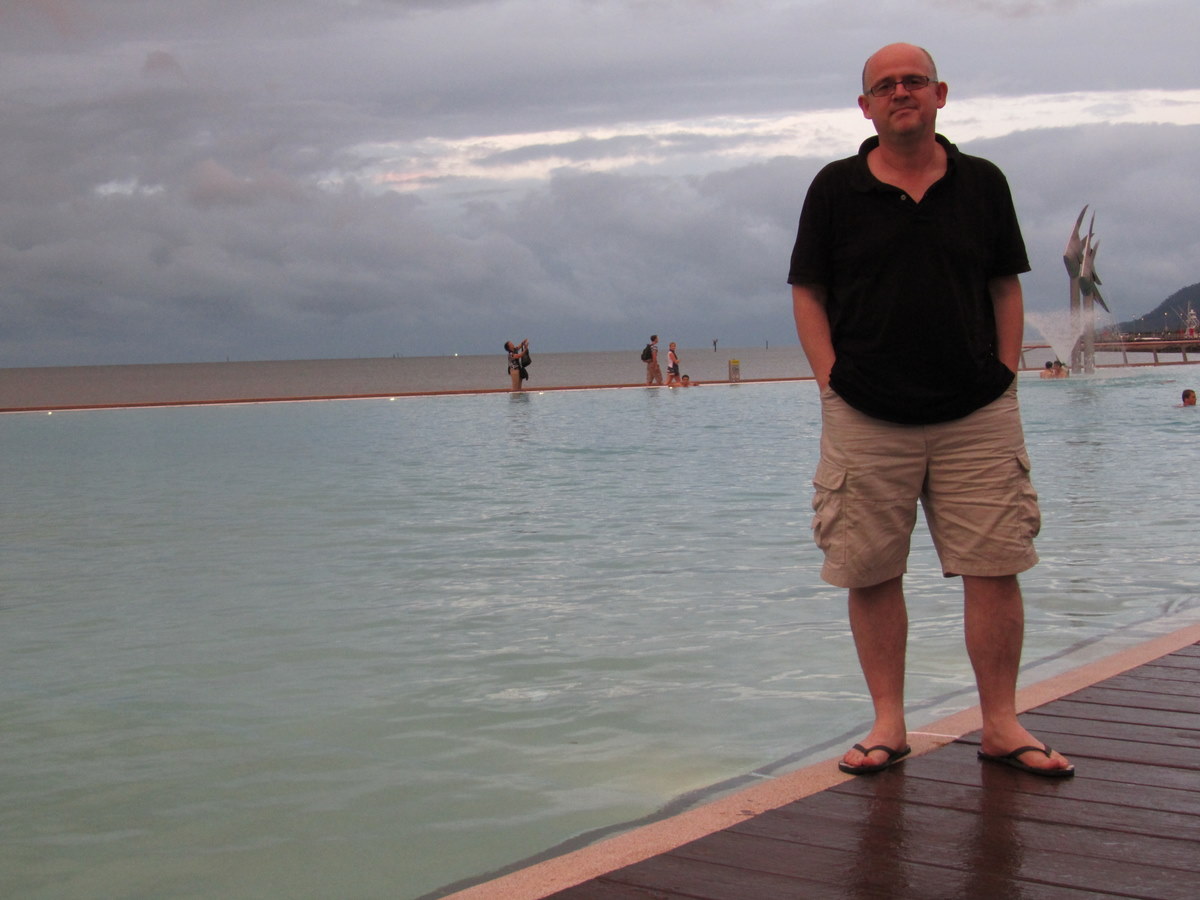 This is a somewhat unexpected post from Cairns Airport. Although it would have been great to have a direct flight from Sydney to Darwin, economics, timezones, and schedules have necessitated a four-hour stop-over in Cairns.

With that in mind, I organised to catch up with one of my colleagues I’ve spoken to on the phone on several occasions but have never actually met. I also did some online research with a late afternoon swim in mind to break up the trip. Although I’d found the Cairns Tobruk Pool via the internet, my colleague suggested going for a swim at the pool at The Esplanade.

That was a really great suggestion on her part, as it was physically far more appealing than The Tobruk which I’d passed on my way into town, which somewhat resembled the Lismore Baths of old. And even though it was raining as I swam, it was still a very enjoyable way to spend an hour or so.

Afterwards I had a glass or two of wine at a nearby bar and took in the sights of Cairns. In contrast to the plane trip from Sydney which was full of grey-haired Americans in a tour group, the tourists in Cairns tend to be younger, French or German-speaking, and usually of the honeymoon couple variety.

Not all the passengers on the flight from Sydney were older Americans in tour groups. I had a couple of young French gay guys seated with me who, for much of the flight, couldn’t keep their hands off each other :)

After a while, the rain cleared, and I wandered back to The Esplanade pool which was, by now, looking really attractive.

And then it was time to head to the airport. Imagine my displeasure when I noted my flight to Darwin was delayed by three hours. The woman at reception comforted me with a warm smile and a $25 food voucher which I spent on some garlic bread and meat lover’s pizza.

Although my friend Graeme advised me of some local gay bars to visit, I decided, by the time I’d finished my pizza, it was probably easier to stay at the airport and drink, rather than catch a cab back into town and then out again. I’m having a Cairns Lager which comes in one of those ridiculously shaped tall glasses that you can never tell if it’s a middie, a schmiddie or a schooner.

By current reckoning, I’ll arrive at my hotel in Darwin at 1.00 am local time (add 90 minutes for Sydney time) – thank goodness it has 24-hour reception – which means I’ll have spent thirteen hours in transit today. I’ve listened to some music, I’ve slept for a while, and I’m about halfway through Rodney Cavalier’s book about NSW politics. I reckon by the time I arrive in Darwin, I’ll have knocked off the remainder. Expect a review tomorrow.

In the meantime, this is James signing off from a disturbingly vacant Cairns Airport.