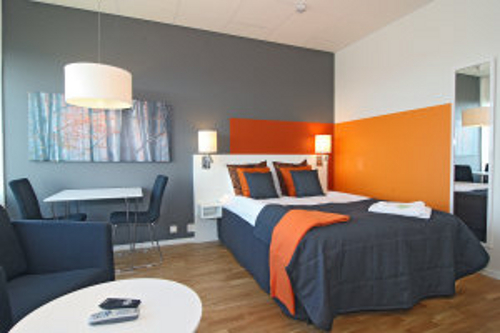 Having made the rather rash decision – by my standards – to book a mid-year holiday to Stockholm at around the time of Stockholm Pride, I’ve begun to make some plans, make a few bookings, and generally look around for interesting things to do.

I have booked a small studio apartment in a building that’s about to open – I think it opens tomorrow – about ten minutes by the Tunnelbana (metro) from the centre of Stockholm. As it’s a new apartment, I’m sure there’ll be a few bugs here and there, but I also assume it’s going to be clean and modern which I think is rather important. While it’s all very good to stay in an historic building, my travel experiences tell me they usually have bad plumbing and no lifts. At the end of a long day, I’d rather some of the creature comforts, even if the building does look a little modern and impersonal. Also on my previous visits I’ve moved around a bit from location to location, so it will be a new experience to “stay put” for a few weeks and to have somewhere to call home.

Obviously I’ve been checking out the Stockholm Pride website to see what’s on this year, though there’s little detail at the moment. That’s not so surprising, though, as my experience from previous years is that it’s often quite late before they announce too many details.

I’ve been checking out some of the summer concert tours, but haven’t found all that much that interests yet. Inevitably I’m sure I’ll go to Allsång på Skansen which usually features a range of popular Swedish performers. The schlager night on Mondays at Victorias on Kungsträdgården is already in my diary as a weekly “must do”. I’ve have beooked a ticket to see Swedish singer, Peter Jöback supported by Cookies N Beans (Swedish bluegrass) which I’m sure will be fun. I’d love to see some of the new performers I’ve discovered over the last few years like Säkert and Bo Kaspers Orkester (and others) and I’m generally keen to discover new stuff though, so if you have any recommendations, I’d really appreciate your thoughts.

I’ve been trying to book to do the Stieg Larsson Millenium Tour, a walking tour which covers the buildings and locations covered in the Millenium series of books but have been experiencing difficulties. In the past I’ve found I’ve been unable to use my Australian credit card for purchasing tickets on some Swedish websites, and I think that’s happening again. I’ll keep trying, because the tour looks wonderful. My friend Grant did the tour in October last year and has some wonderful photographs of what it’s like.

There’s also an ABBA City Walk which recounts many of the places and locations related to ABBA and their career which looks like interesting.

I’m most excited, however, about having booked one of the Stockholm Roof Top Tours.

How cool does this look?