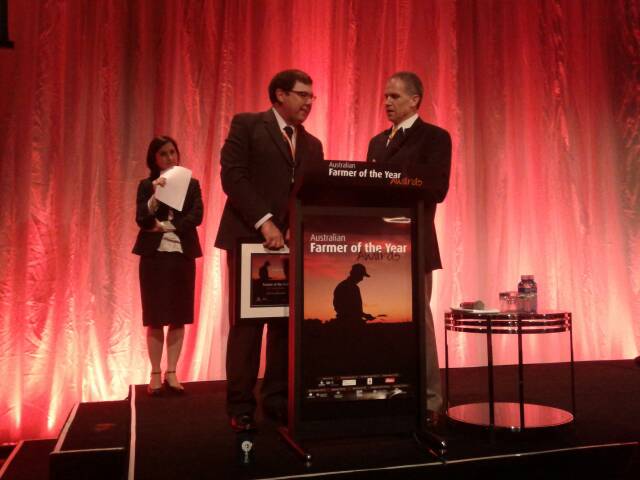 Farmer Of The Year

“So what do you know about life in the country?” a colleague asked me with a degree of incredulity when I told him I was going to the “Australian Farmer Of The Year Awards” at Sydney’s Westin Hotel.

“A fair bit”, I told him. I then proceeded to tell him how I had spent most of my life living in the country (and parts of the outback) and that my grandfather (and previous generations) were actually farmers. “In fact”, I told him, my great-grandfather was an award winning pig farmer”. He seemed genuinely surprised that a seemingly “urbane inner-city dweller” was actually a “boy from the bush”.

Even though I’ve now lived in the city for almost sixteen years, my “country identity” remains an important part of how I see myself, even if many of my friends in the city have long forgotten this. And it’s on occasions like the “Australian Farmer Of The Year Awards” that I’m reminded too.

It was a great night, especially as I was able to catch up with half a dozen people who I know from my life before moving to Sydney. In fact, a former colleague, also now living in Sydney, told me of a recent encounter with someone who also doubted his “country credentials”. “What would you know about life in the country?”, he was recently asked by someone who had moved from Sydney to a regional centre less than five years ago. Clearly, the woman involved hadn’t done her research, as he too had spent half his life living in the bush, far more than her.

Every time I go to something like this, or any time I make a trip home to Lismore (or any other part of the country) I feel a little sadness that I haven’t remained living in the country. Whenever I’m there I genuinely feel happy. But whenever I return I also feel a sense of frustration, as there are so many aspects of life in the city I love also.

I’m pretty sure I’ll return to life on the North Coast when I’m older and feel I’ve done everything I wanted to achieve with my career. But you never know, do you? I came to Sydney thinking I’d spend just a few years here, and suddenly it’s sixteen years later.