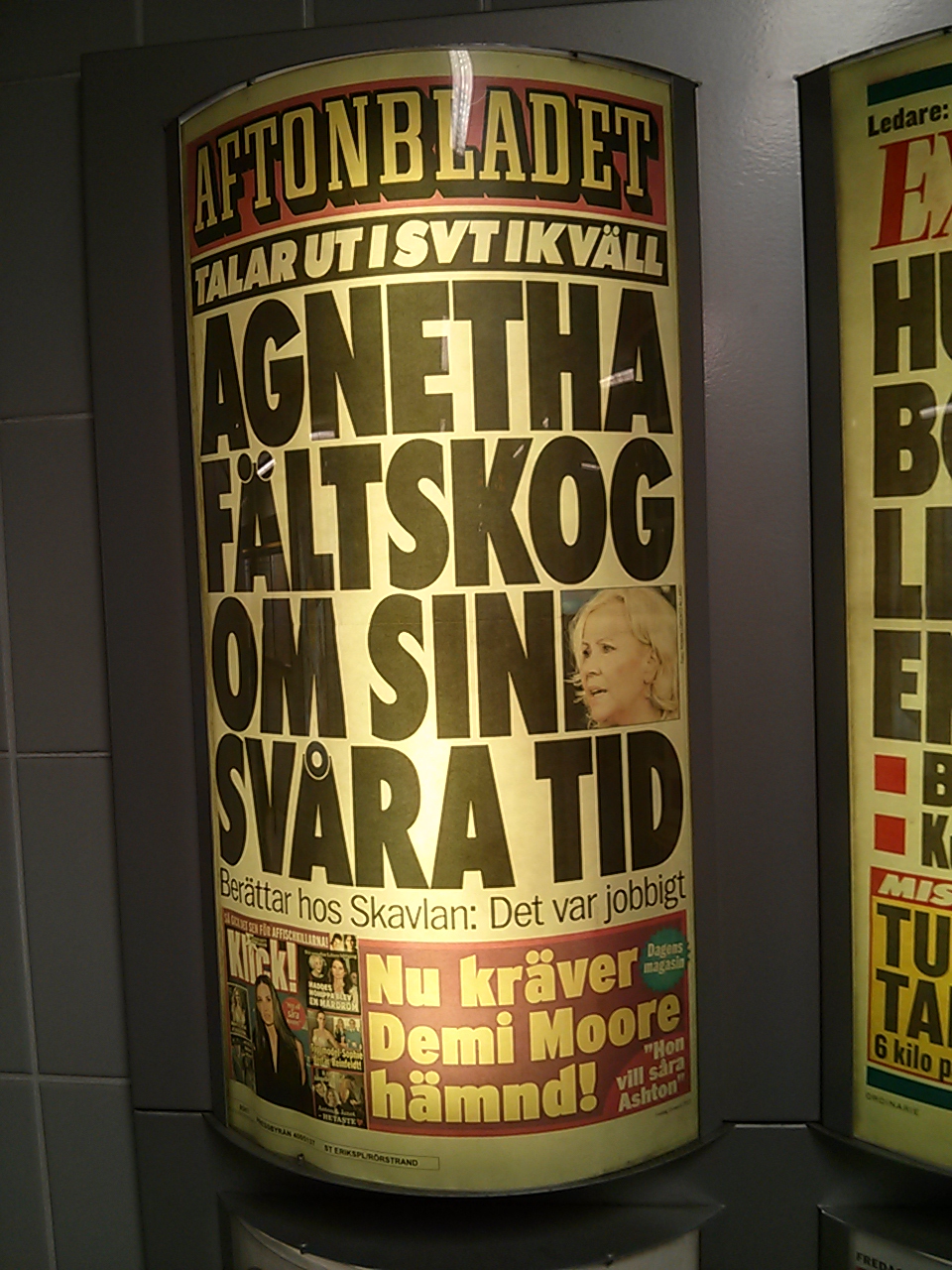 “Speaking out on SVT tonight – Agnetha Fältskog on her difficult times” proclaimed the Aftonbladet news-stand headline all over Stockholm today. Thirty years after their break up, ABBA remains an important part of the national consciousness here, and an appearance on a national talk-show is enough to generate national news.

And this is particularly so if you’re always described in the media as “The Modern Garbo”. Although she appears in public from time to time, and repeatedly says she hates being called a recluse, it really is a big deal when Agnetha does what she’s done this week. She’s released her first new CD in eight years (and the first with original material in seventeen years), and she’s also appeared in a number of radio and television interviews.

The interviews so far have seemed somewhat rehearsed. She’s spoken about how she was approached by the writer and the producer (with a Britney Spears, Kelly Clarkson pedigree, but still Swedes), and when she heard the songs, says she couldn’t resist them and agreed to do an album so long as she “didn’t sound old”. She’s 62. She’s admitted to having had some singing lessons, as she was a little out of practice for the first couple of recordings. She also now seems happy to acknowledge her ABBA past. Indeed, when you see the video clip for the first single, “When You Loved Someone” you can’t help but think it has a certain autobiographical element to it, reflecting on her own relationship breakup over thirty years ago. Or am I reading too much into it?

As soon as it was announced she had a new record and was doing some interviews, I knew she would probably appear on Skavlan. As I wrote to an ABBA mailing list the other day…

I think the TV show to keep an eye out for will be Skavlan. He does a fantastic show on SVT where he interviews celebrities all the time. He was the interviewer who spoke to Bjorn about his atheism, and to Benny and Ludvig about their alcohol problems. It wouldn’t surprise me if Agnetha turned up in this program. Even though he’s Norwegian, it’s a program where she could articulate herself clearly in Swedish, and which reaches a large population throughout Scandinavia. The program goes to air on Friday nights, and although I haven’t seen the advertised guests for this weekend, I think he would definitely be seeking out Agnetha for a forthcoming program.

I really like Skavlan’s show. He’s quite good at the confessional, but doesn’t let anything get bogged down too heavily. I think he’s like Michael Parkinson when he was in his prime. I like it so much, in fact, I wrote to the general inquiries email address of Swedish TV a few days ago asking how I could obtain a ticket to see a live recording. I’ve yet to hear back from them, though I hope it might be possible sometime in the future.

In the end she didn’t really say anything I hadn’t heard before, either in interviews, or through her book released over a decade ago. She flirted slightly with the tennis player, Mats Wilander, which was interesting. She also seemed to command a presence many years later, both for the audience, and for the other guests on the program. It was still nice to see her, reasonably comfortable and relaxed, on real live Swedish TV. Here’s the interview on Youtube. Click on the captions option to see the interview with English subtitles.

Soon afterwards I wandered out for a couple of drinks, invited by Robert and Sandra, and which included a large-ish group, very interesting group of people.