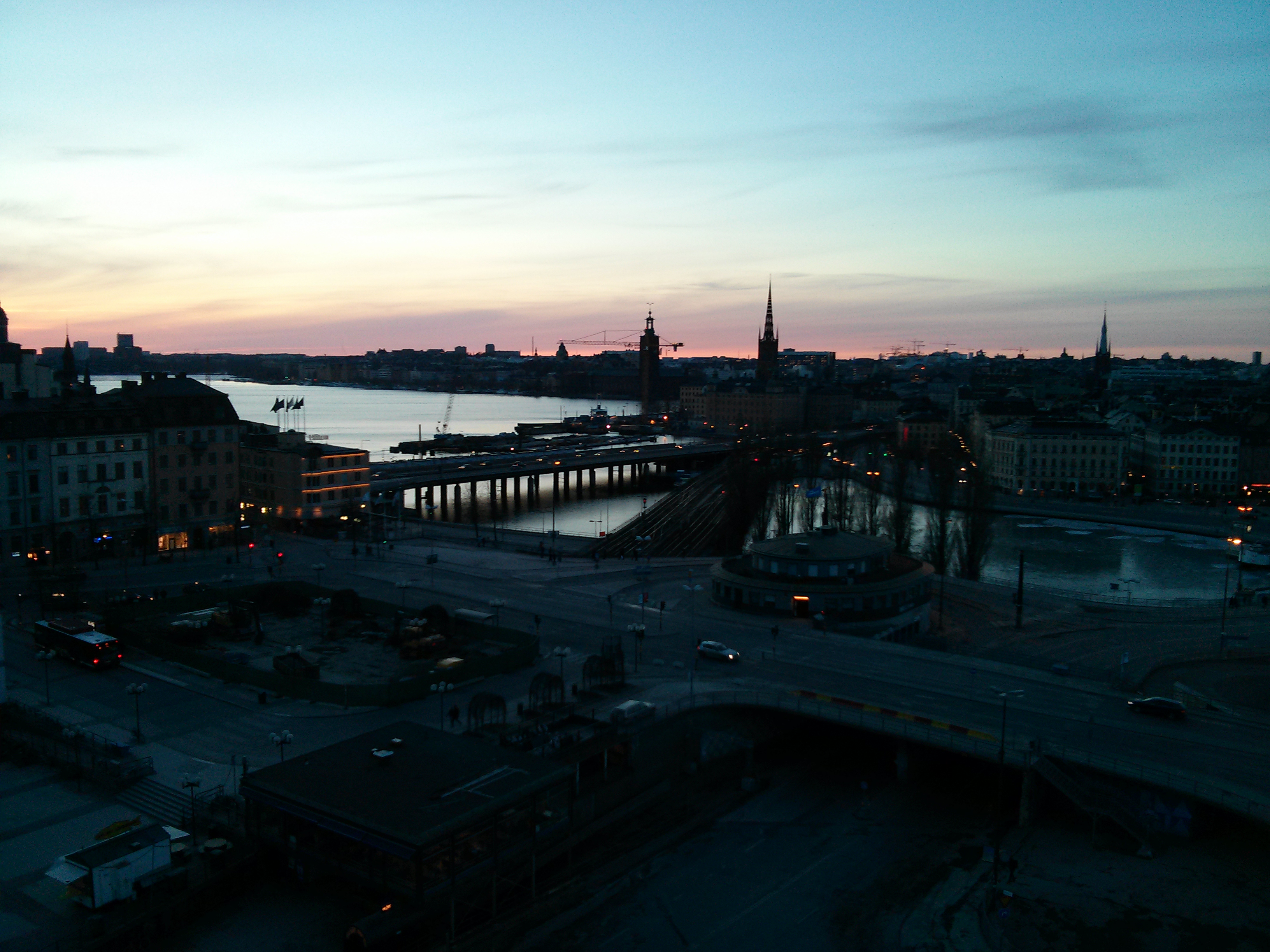 It wasn’t the best sunset I’ve seen in Stockholm, but it was pretty damn good. So at the end of an afternoon of sight-seeing, we braved the conditions and headed to the top of Katarinahissen to take some photographs.

We were on the way home after a visit to the legendary Stockholm nightclub, restaurant and bar, Berns. Even though I’ve visited Stockholm on a number of occasions previously, I have only a vague memory of the inside of Berns. The memory involves standing in a busy queue waiting to get in, and then having to wait even longer for a drink. In stark contrast, this time around there were only a couple of small family groups, a few young singles here and there, and a couple of mother/daughter duos.

The inside of Berns is classic “old style”, with comfortable chairs, high ceilings and chandeliers. The waiters are fairly easy on the eye too. We thought a cocktail at the end of long day of hard-core sight-seeing was in order. Mine was mandarin flavoured, while Sue’s was mint and ginger flavoured. Yummy.

We had spent much of the afternoon wandering around Skansen, the open-air museum in Stockholm. As a museum, I can’t think of anything else like it in the world. The short story of Skansen is this: about 100 years ago, someone had the idea of bringing to Stockholm (in one central location) lots of different types of buildings from all over Sweden. As there’s quite a bit of variation in the style of buildings and animals (due to climatic variation), it gives you a good overall snapshot of life in Sweden from about 1850 to 1950.

Inside the buildings there are often people dressed in costumes demonstrating arts and crafts. We chatted briefly with a woman who made jewellery for a living, but who worked/hobbied on the weekend at Skansen hand-making spoons. We also chatted briefly with a woman who’d made some traditional Swedish Easter meals, including some herring (of course), as well as a dish made from tomato and egg.

One of the more “modern” Swedish traditions we engaged in was a meal of köttbullar (meat balls). “Next time you go to IKEA in Melbourne, you can tell them you’ve eaten meat balls in Sweden and they’re nothing like the rubbish they’re serving up”, I urged Sue.

Although many of the exhibits at Skansen were closed due to the winter, it was still really very interesting to walk around. In some ways, it was actually probably a little better, as the crowds were small. I’ve been to Skansen a few times before, always in summer, and so it was interesting to see things differently.

When I’ve visited, it’s usually been for Allsång på Skansen, the iconic Swedish sing-a-long television program. “It’s like Countdown meets Carols By Candelight”, I told Sue as we walked past the main stage, now under re-construction for this year’s season in July and August.

Meanwhile, there was another “show” underway at the nearby church in Skansen, as we watched the beginnings of a wedding. “You’d need to be fairly wealthy to afford a wedding at Skansen”, we were later told.