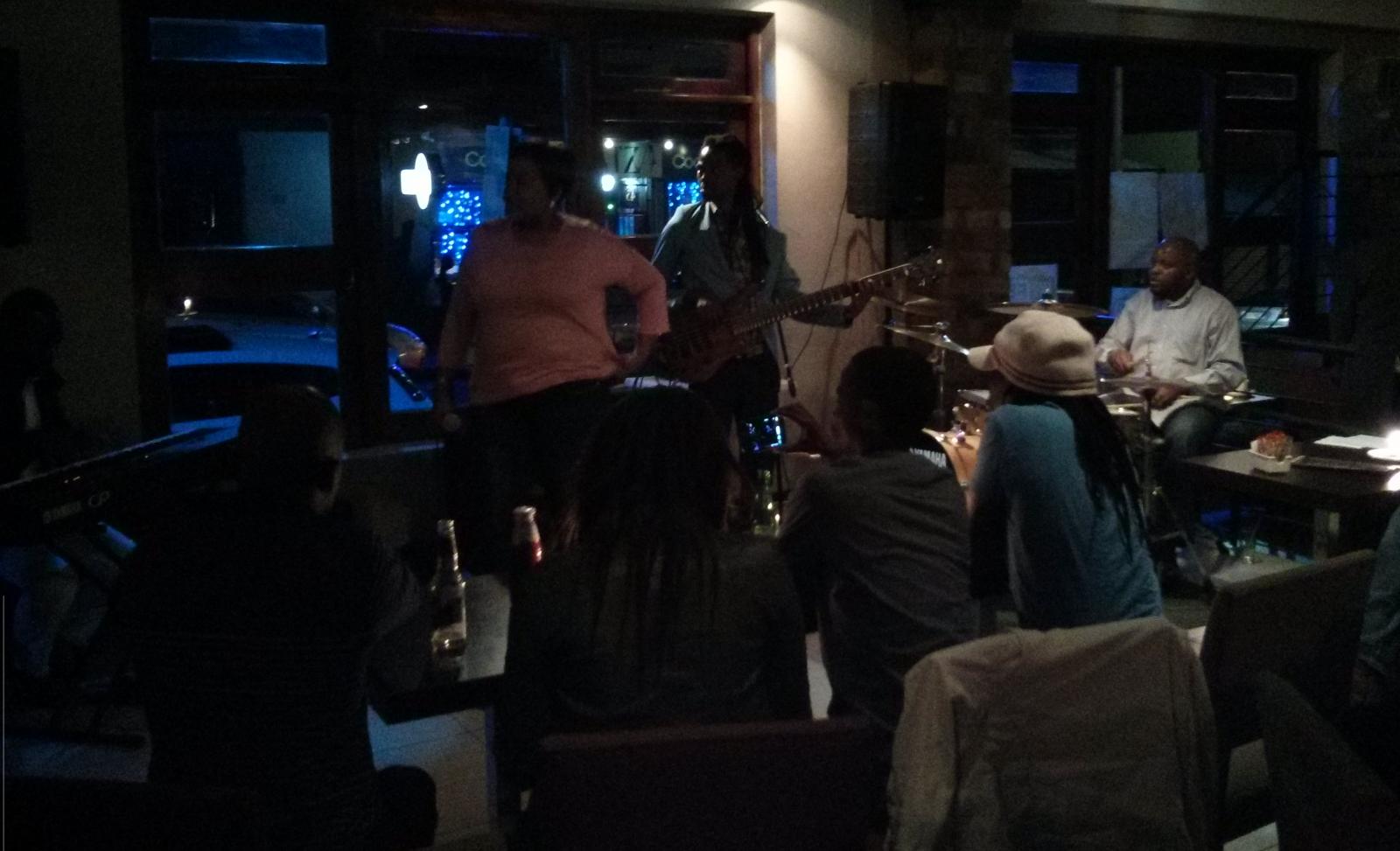 There’s a sign on the wall of the Sophiatown Bar which tells you a little about the history of the area of Johannesburg where I’m staying. The sign tells you Sophiatown was one of the few places in South Africa where blacks were allowed to own land. Unlike other areas, where the housing was very uniform in style and construction, the ability to own land meant people built the kind of houses they could afford, which resulted in greater architectural diversity. It also lead to a great sense of community, the sign goes on to say.

“They used to call this area Hollywood because the SABC (South African Broadcasting Corporation) is closeby, and all of the actors used to come to the bars and cafes here” I was told by the woman of about sixty who is the chef at the guest-house where I’m staying. As I made my way to the Sophiatown Bar tonight I understood immedediately what she meant. The area is full of lots of small bars, restaurants and cafes, and a convenience store or two.

There’s also a lot of security guards on patrol in the area. “There’s a guard in the street from 6pm to 6am”, I was told by the bloke who met me tonight and showed me around the guest-house. As he showed me the elaborate security system they have in place, I looked up and around and noticed the barbed wire which protects the apartments.

“You’re safe around here”, I was told by a bloke sitting next to me in the Sophiatown Bar. He was a 29-year old black man who works in real-estate. “But there are some areas you shouldn’t go, and it’s not because they’re black neighbourhoods, it’s because they’re poor”, he told me.

Both he and another bloke I chatted to (the guy who drove me to my apartment tonight, a mid-20s guy who also spoke a a bit about being Muslim in South Africa) told me South Africa would be in a much better state of affairs if Nelson Mandela had become President when he was younger. “With more time, Mandela would have been able to achieve more in achieving equality”, I was told.

As we drove on the motor-way towards my apartment, my driver pointed out the new high-rise buildings, inner-city apartments, the university, the Mandela Bridge and so on, as signs of some degree of economic prosperity. As we got closer to the area in which I’m staying, however, we began to see young black men approaching vehicles at traffic lights and asking for money. One of them carried a sign which I still don’t understand (and which I didn’t ask himto explain) which said something about trying to keep a particular intersection “crime free”.

“We still live with apartheid”, the bloke in the bar told me. He told me of the sadness he felt that the man who parked his car for him tonight was old enough to be his father. “I’m doing fine because I went to university, but these people are still recovering financially from all of those years.”, he said. When I asked him how long it would be before the years of inequality would be left behind he told me he didn’t know, though conceding it would be decades, not years.

Both he and my driver expressed concern about what might occur in South Africa following the death of Nelson Mandela. My driver, in particular, told me he thought there would be some blood-shed. His argument was Mandela was the uniting force which held the nation together amidst long-running arguments. In stark contrast, I’ve also been advised these kind of arguments are somewhat alarmist, since Mandela hasn’t been a major public force in South Africa for at least a decade.

When I asked the bloke in the bar tonight why he thought Mandela was being kept alive, he was at first taken aback. “How do you know he’s dead?”, he asked me with a wry smile. When I told him that’s what all of the papers are now saying, he told me no one is really willing to say that publicly here. Both he and my driver told me they thought the key issue was an argument amongst Mandela’s children and grandchildren over both property (there’s a photograph in particular that’s worth a lot of money, apparently) and about where Mandela should be buried. There’s a complicated story about how one of Mandela’s grandchildren has exhumed the bodies of three of Mandela’s children and moved them to his own property. There’s a legal battle underway about this, and I guess in the background to there’s an underlying concern about who will “own” Mandela’s body when he dies.

As we continued our conversation in the Sophiatown Bar, a fantastic jazz band played in the background. At first it was just a trio (which included a keyboard player who had returned home from living in Sweden), though they were soon joined by a female vocalist with a Dianne Reeves quality in her voice. They had the middle-class black clientele of the bar in the palm of their hands. “All you ever hear about is the proverty and the killings, but this is South Africa too”, the guy in the bar told me tonight.

I should mention it wasn’t just politics we talked about at the bar tonight. He was also curious about the result of last night’s match between the Wallabies and the British & Irish Lions. When I told him the series was no one-all he was surprised. “That’s good, because I have to say all of your sports team are really terrible at the moment”, he said with a laugh. Another moment of great insight :)