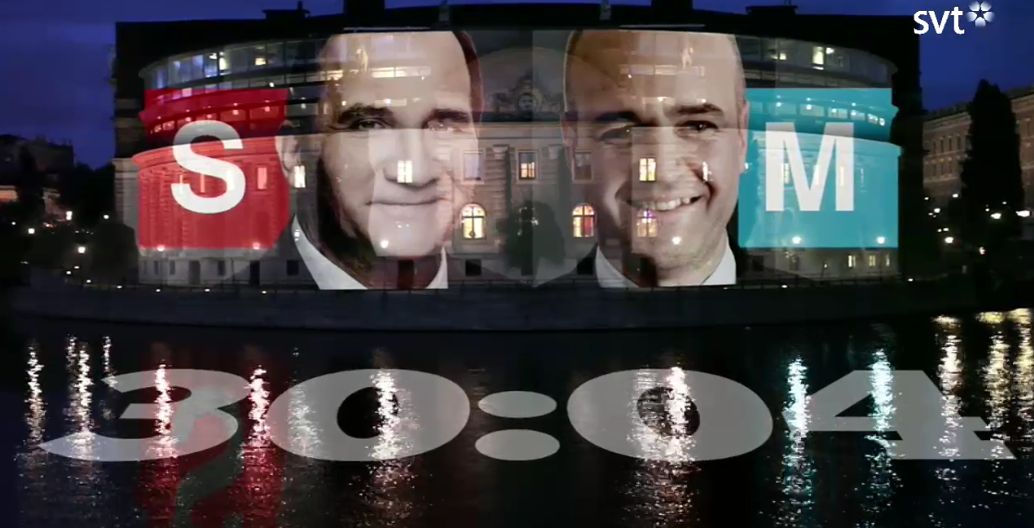 A few years ago a former colleague and I joked (on Twitter) about how much we both loved election nights. The sense of drama. The winners. The losers. “I could watch an Estonian election and, without knowing the language, still enjoy it”, I recall her saying. Although she’s been tweeting about the Scottish referendum, she’s been noticeably quiet on the Swedish election which, in contrast, I’ve been following closely. Thanks to the wonders of the internet, I spent quite a few hours yesterday watching SVT’s coverage of this year’s Swedish election, the first time I’ve done so.

While in Australia, we go through the ritual of a seat by seat analysis of the results as they come in, the Swedes make one big announcement at a predetermined time. In Australia, we have to sit through the agony of phrases such as “it’s just a handful of votes from a couple of small booths”. But in Sweden, they literally have a “countdown” where all of the results are revealed at once. A clock “ticks down” on the television screen to the “big reveal”. “The results are in 5, 4, 3, 2, 1…” Seeing the results revealed in this manner was like watching “Big Brother”. There were cameras at all of the venues where the party faithful had gathered. Applause at some; tears at others.

But even then, the results weren’t clear. Yes, the Red-Green Alliance had gained the highest number of votes, but not enough to control the parliament. Remember Australia 2010? The anti-immigration party, the Swedish Democrats with over 10% (now a day later, almost 13% of the vote) seemed to have the balance of power. But that doesn’t mean they will have such a role, if the Red-Green Alliance can attract the Centre Party or the Liberal Party (members of the Right Wing Alliance) to join them to form a majority in parliament. On top of that, all of the parties can in theory put forward their own budgets which can be voted on. It’s the kind of uncertainty the Australian media and political types on Twitter would abhore. We like our politics “black and white” in Australia. Left and right. Good and bad.

The political parties in Sweden, aside from the Swedish Democrats and the Left Party (a remnant of the former Communist Party), all tend toward the centre. Indeed, most of the parties would appear to be on the “left” in an Australian context. The former centre-right government had about 50% representation of women in cabinet, as an example of how switched on the Swedes are, compared to just one female member of cabinet in Australia’s centre-right government.