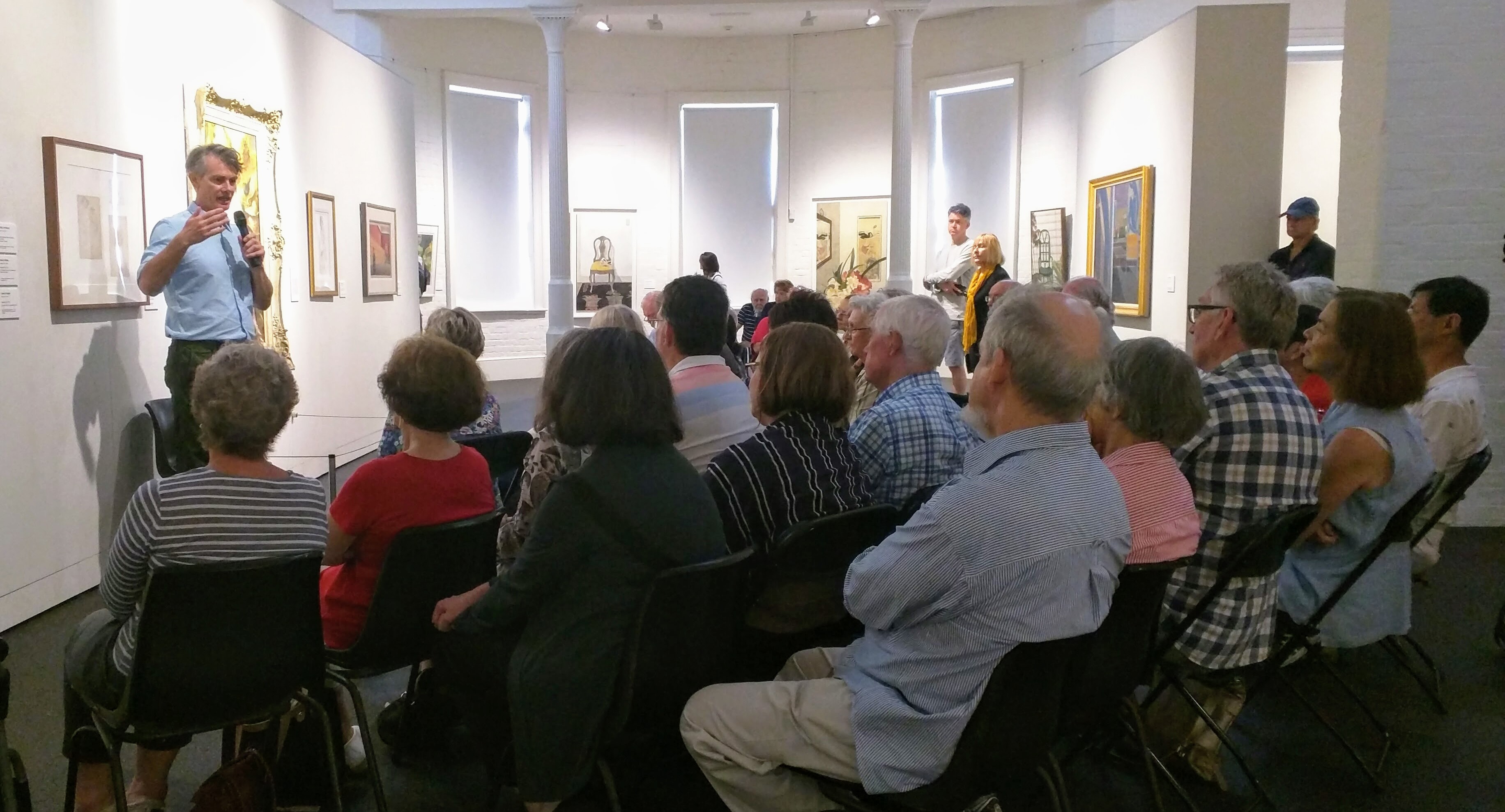 Margaret Olley and my hometown, Lismore

If, like me, you’re from Lismore (Northern NSW Australia), there’s a good chance you’ll know, or have met someone with the surname Olley. There were Olleys across the road from near where my Aunty Joanie lived. There was an Olley in our year at high school. If fact, there were quite a few members of the Olley family throughout Richmond River High School. But the most famous member of the family is, without doubt, Margaret Olley, the Australian artist.

Though born in Lismore, she spent most of her life in Sydney. When I, too, moved to Sydney in the mid 90s, I would often see her at art exhibitions and talks around the city. In 2006, for example, I remember seeing her at a talk, where I described her as “a rather eccentric woman in her eighties with the funkiest walking frame ever, complete with “bike bell” and “horn” to alert people to when she was coming through.”

As we sat and waited for a talk about Margaret Olley’s life, held this afternoon at Sydney’s S.H. Ervin Gallery, we got chatting to the woman sitting next to us on the couch. She, too, looked pretty funky. Probably in her 70s, she wore colourful glasses, and had a few stories about travelling around Australia as an artist and photographer.

“He’s from Lismore, so it’ll be interesting to hear his perspective on things”, she said. She was referring to the recently appointed CEO of the National Art School, Steven Alderton, who was giving today’s talk, and who formerly ran the Lismore Regional Art Gallery.

In a light-bulb moment, we told the woman next to us we were also from Lismore, and soon discovered she was too. Small world, eh. We continued to chat about our shared North Coast history, and then she added “The ice problem up there is terrible, especially at Casino”. Yes, indeed.

A stark contrast, I thought to the kind of upbringing Margaret Olley would have enjoyed, living on a farm at a place called “Green Pigeon”, near Nimbin, “Have you heard of that?”, I asked my friend Sue who was with me, who grew up in Nimbin. She hadn’t and so, thanks to Google Maps, we quickly established it was probably closer to Kyogle, near Lillian Rock, if anything. Even now, it would be a good 45 minutes by car from the centre of Lismore. Heaven knows how long it must have taken them back in the 1920s and 1930s. Perhaps that’s why she was sent to boarding school in Brisbane during her high school years.

“She was very much a country woman”, Steven explained, as he related stories around her upbringing. “You would go to town on a Saturday, walk around the block in Lismore, and you would pretty much see everyone you needed to”, he said. Believe me, it was still like that during my upbringing in the 1970s and 1980s.

As she approached the end of her life, there was talk about establishing the Margaret Olley Arts Centre at Lismore, as a much needed replacement for the Regional Art Gallery. Though she was willing to leave $1-million towards the construction, the Lismore City Council had competing priorities, meaning the money went instead towards the Tweed Regional Gallery at Murwillumbah. Without going into too much detail, Steven explained some of the politics involved, and that Lismore’s Mayor (until recently), Jenny Dowell had been incredibly supportive. Though tempted to stay and chat, and learn more about the politics of it all (bloody curious journos!!), we left it at that, enjoyed the talk very much, and instead wandered on home.