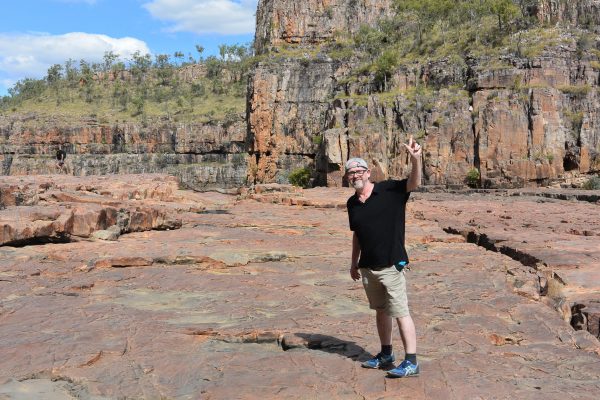 “You need to get some insect repellent”, I advised Sue, ahead of her three day trip to Kakadu. I was thinking of and remembering the risk of mosquito born conditions like Ross River Fever. It was only when we stopped at the Emerald Springs Roadhouse (about 200km south of Darwin) that I remembered the other reason: blowflies. Living in a city you can easily forget the ubiquity of the blowy in the Australian outback. With a surprisingly very good flat white coffee in one hand, I used the other the swat the flies, as I walked onto the outdoor deck of the roadhouse.

As I did, the owner (who was eating her breakfast) shot me a smile. As we entered later in the day, she smiled and said hello again, “You’re looking better than you did the other day”, she said, obviously confusing me for someone else. When you’re an unexceptional looking white bloke in your fifties, and have a bald head and dark glasses, you can pretty pretty much fade into the background. Or at least, be often confused for someone else. At my local pub, for example, one of the barmaids had been in the practice of pouring me a Victoria Bitter, until she realised it was one of the “other four blokes who looked like me” who drank VB, whereas I’m a “Reschs” drinker.

As our tour guide explained, these roadhouses are usually without mains power (running on diesel), and have to transport everything in and out. which is why prices are sometimes surprisingly high. “They’re a vital part of outback life”, he explained.

Later in the evening, as we revisited the roadhouse on the way back into Darwin, I looked around the bar at the “locals”. They were all men, mostly in their 40s and 50s, though there were a couple of younger looking blokes (one of whom caught my eye!). With a beer, they mostly sat individually, watching the Channel 9 News via Imparja TV. I’m guessing they’re all working on nearby properties. What an interesting life they must lead.

We were roughly half-way to Nitmiluk (Katherine Gorge) on a bus day trip through AAT King. Already we’d visited the Adelaide River War Cemetery which I’d visited only two days earlier with Sue. Our next stop was Leliyn (aka /Edith Falls).

It was the first time I’ve been on one of those ‘big tourist buses”. Normally, I’ve been on buses of around 21-seats. Previously I’ve looked at those BIG buses with trepidation. They’re almost always a FULL of people who take over the queues to the cafe and the toilets. Thankfully, ours was only half-full, which meant there was plenty of room on board, and hopefully we weren’t too much of a problem for the people already enjoying the falls.

After a lovely swim (the water was initially cold, but soon very comfortable), I sat at the nearby cafe, and over an iced-tea, contemplated the world around me.

It was then that an older Asian woman reached over in front of me and pointed towards one of those “novelty signs” which said “I’m spending the kids inheritance”. “That’s my philosophy and you should do it too”, she told me,. “When I was young I worked two jobs to support my children. “Now they have degrees, good jobs, and they’re living all around the world”, she said. “They can look after themselves” she added.

After another hour so, we finally made it to Katherine (which I learned was the hometown for Australian sportspeople, Cadell Evans and Liesel Jones). It’s twenty one years since I first visited Katherine, not long after the big flood of 1998. I remember the town looking a little shoddy in a post-flood kinda way. Now, the town was looking much recovered, though there are flood signs all around, noting the level the water reached back then.

After lunch, we embarked on boat tour of two of the gorges at Nitmiluk (Katherine Gorge), though it’s worth noting it’s only the first one that’s actually called “Nitmiluk”, we learned from tour guide, James. Though not Jawoyn himself, he provided a terrific commentary, explaining both the scientific explanations of the creation of the gorge, as well as the the Jawoyn creation stories.

As it’s the “Dry Season”, and it’s been an especially dry “Dry Season”, the water was low, restricting the number of gorges open to the public. Nonetheless, we had a wonderful experience. One of life’s great experiences.